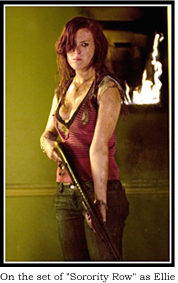 The interview took place in an elaborate suite at the Ritz Carlton Hotel in Chicago in September of 2009. Rumer was on a press junket for her film “Sorority Row.” She’s the daughter of Demi Moore and Bruce Willis both Hollywood stars. Rumer is 21 years old and attempting to embark on a career as an actress. 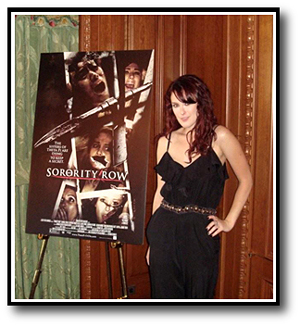 Rumer has a lovely personality and you can definitely see the resemblance to her beautiful mother in her eyes and mannerisms. She’s articulate, gracious and grounded. When I asked her if she would mind if I taped the interview for the radio show WIND Hollywood 360 she was very accommodating and immediately took off her bracelets so they would not make any sounds.

Sarah Adamson: I have to tell you that I enjoyed your work on the film “House Bunny.”

Rumer Willis: Thank you so much.

S.A. Did you enjoy your time on the film?

R.W. I really loved getting to work with an entirely female cast and seeing more movies like that – that are female driven. I think its more fun to play kinda-awkward characters.

S.A. You had a milestone birthday recently can you tell us about that?

R.W. I just turned 21. My whole family went out to Vegas we had a great dinner with all my friends. I got to have a couple of my friends and family fly in from out of town, which was so amazing. I danced a bit. Learned how to gamble a bit and just had a great time. Probably one of the best days I could have had there.

S.A.  I read that you starting acting at an early age, could you fill us in?

R.W. I’ve always been interested in acting. I auditioned to play my moms daughter in Now and Then when I was 6 years old. Ever since then it’s always been something that I’ve loved and wanted to do.

S. A. You must feel very comfortable on a film set growing up with 2 parents in the business. Any memorable moments? 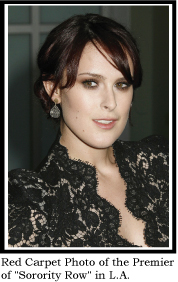 R.W.  It’s just fun. It’s not like a normal circumstance – when you’re going to visit your dad at his job and he’s covered in blood and its like ‘aw cool give me some too,’ ya know (giggling)
It’s just such an awesome experience especially now that I’m older I got a perfect view of where I want to be and where I aspire to be one day, so its amazing.

S.A. Can you tell us a little about the film “Sorority Row” and your part in it?

R.W. Well, it’s basically about a group of sorority girls who are trying to get back at one of the girls’ boyfriends and they play a prank on him and it ends up going way too far. We end up killing one of our sisters. The rest of the movie is really about the struggle of our emotions and dealing with the situation. One of the things I loved about the script is first of all, it’s not about men coming and saving the day. And it wasn’t just a horror film just about people getting killed where you could really put any actor in.  It was about each of the different characters and you really needed to cast it right to be able to see the journey that each of them separately go on with each of their different personalities. 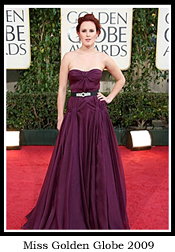 S. A. Can you tell us about Ellie, your character?

R.W. She’s definitely one of the ‘bookish’ ones of the sorority. She was probably finishing all the term papers for all of the other girls. She’s going through this mental breakdown, she can’t handle any of the chaos with the emotional situation, its really hard for her. She’s breaking down, crying and screaming the whole time.  My character and Briana Evigan, who plays Cassidy, were never really in on the prank originally. We were kind of shocked too, so we didn’t really know what was happening. I definitely think our two characters really follow the more righteous, more moral path compared to the other girls.

S.A. The studio production notes talk about filming in 27° temperatures. Brr… What was that like?

R.W. The first scene of the movie took about three days to shoot and it was all night shoots. It was about 20-some degrees; we were all in skimpy little outfits. I was probably the luckiest one because I was nerdier and I got to wear Uggs and a sweater. I felt so bad for the other girls they were all in heals.

S.A. It seems like under those circumstances, you girls may have bonded a lot?

R.W. The first night that we got there we all had dinner and we all clicked immediately and kind of became a sorority in our hotel. Our rooms were basically right next to each other. We would just a knock on the wall and hang out laughing…we had a great time.

R.W. I never really had a solid group of girlfriends. These girls are definitely the first group of girls that I’ve ever really stayed in touch with and we basically talk every other day.  They were all at my birthday, I love them, they’re unbelievably talented, no drama, everyone is so sweet. Everyone is extremely supportive of each other and that’s what I think is amazing, especially in such a competitive world.

S.A. Anything else you’d like to tell us about the movie?

R.W. It’s really funny. It doesn’t look like that from the trailer, necessarily. Its very tongue and cheek humor. It has a lot of big laughs. The characters are really dynamic.  One of my biggest pet peeves is when I go see a horror movie and I start watching and you can immediately guess who the killer is. They did a really great job in this film of really keeping you guessing.  The death scenes are all very unique, very original; I don’t think I’ve ever seen any like them before.

S.A.  What do you hope that moviegoers will take away from the film?

R.W. I just hope they have a great time. I really just hope that they’re entertained. And honestly, it works for such a diverse audience; I think both men and women will really enjoy it.

S.A.  It sounds like they’ve developed the characters in this film as well.

R.W. They really have, and unfortunately, in horror movies, it’s more about the story and you could really mix and match any actors in it. But you really focus and get to know and sympathize with these characters.  You see their different perspectives and again, with such a diverse audience each person can really connect with a different character.

S.A. The film is opening Friday, September 11th, will there be a premiere?

R.W. Our premiere is actually tomorrow in LA. I’m very excited. My whole family is coming. Honestly, I really want to see what my sisters think. That is going to be the biggest opinion I’m waiting for.

S.A. Can you tell us about your sisters?

R.W. Yes, I can brag about both of my sisters! My middle sister, Scout, is going to be attending Brown University in the fall, which is unbelievably incredible. And my little sister, Tallulah is such a ‘fashionista’ and such an independent and strong, little chick.  They’re both extremely smart and extremely grounded. I love getting to have sisters, its really fun.

S. A. I have to tell you I used to watch your dad, Bruce Willis, on the TV show, ‘Moonlighting.’  He really is a talented actor, is he really funny in real life?

R.W.I think in real life, he is almost exactly like David Addison, so charming, so funny, just makes you laugh all the time. My dad had a whole closet of those VHS tapes and my sisters and I used to watch them all the time. I loved it. We totally knew the theme song and all the different episodes.

S.A.  Your mom looks like she’s a lot of fun; she was married to a fun guy. Is your mom funny too in real life?

R.A. You put us all in the same room when were having dinner and I’m telling you, its just kind of a laugh fest. We love board games – we are a big ‘game night’ family.

S.A. Then you throw in the mix, Ashton Kutcher, who had his TV show where he was pulling pranks (MTV’s Punk’d) and he’s really funny too.

S.A. It just seems like you have a really supportive family and that really shows through. How do you feel about that?

R.W. I don’t think I could have gotten luckier and couldn’t be more grateful for all the things that my parents have done to really make that happen. They put us first and I think that was one of the most important things that they did. I have friends whose parents can’t even be in the same room with each other and the only people that are really affected the most are the kids. It’s just sad. It’s really a bummer.  I hope they can set an example for other families who may be going through that situation.  I mean what could be better than having four parents? It’s an even bigger support system. 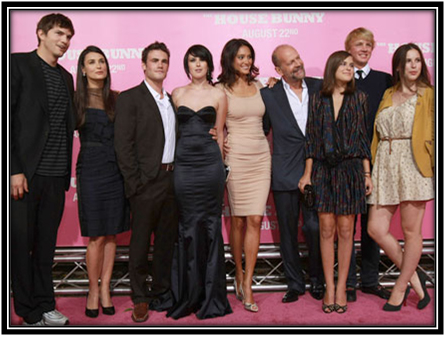 S.A.  What are you working on next?

R.W. I’m doing a reoccurring guest spot on 90210. It’s been a great cast, they’ve been so welcoming and it’s a really fun show. My character is Gia, who’s a journalist and she’s still kind of figuring out where she fits in with the whole crowd. It’s been a great time and I hope to keep doing it.

S.A. What is your favorite thing to do in Hollywood?

R.W. My ideal night is to eat dinner at home and sit outside on the back porch and watch the Discovery Channel. That’s a great night to me. I’ve never necessarily been a big party girl. It’s just too much effort. I’m much more of a homebody.

S.A. How about musical interests? I heard you’ve had some classical training?

R.W. I started classical opera at a boarding school in Michigan for about a year and a half.  I would love to do something with music. I did a short film that my mom directed called Streak.  I recorded a song for that which was so much fun. I definitely hope to be able to do more of that.

S.A. Anything you’d like your fans to know about you?

R.W. Go Chicago Bears! Ashton is a big fan. We have a lot of memorabilia in the living room—definitely a big household name in our home.