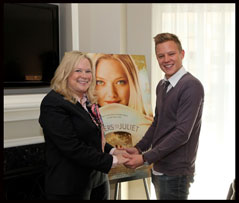 Sarah’s Backstage Pass was granted a video interview with Christopher Egan at the beautiful Elysian Hotel in Chicago. The Australia actor is very charming, witty and lots of fun to interview. He spoke with me about his new role, yoga in LA, filming in Italy, his co-star Amanda Seyfried and his admiration of Vanessa Redgrave. 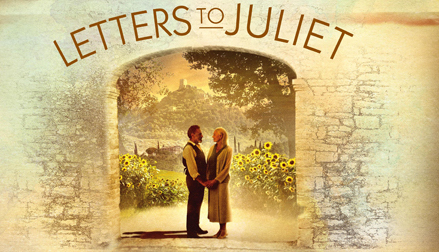 Sarah Adamson: I’m chatting today with Christopher Egan an actor from Australia. He is currently starring in the film, Letters to Juliet, which will open May 14th. First of all, I’d like to thank you so much for speaking with us today. I must tell you I saw your film last week and I enjoyed it immensely. Could you please give our audience a little synopsis of the film?

Christopher Egan: It is based on a letter that Vanessa Redgrave’s character writes when she’s fifteen years old. She comes to Italy and falls in love with Lorenzo. She never pursues it and ends up going back to London and her parents don’t approve. She writes a letter to this organization called The Secretaries of Juliet. The letter never gets found and that’s when 50 years later, Sophie, Amanda’s (Seyfried) character ends up finding the letter and replies to it. That’s when the unpleasant Charlie (Chris, himself) and his grandmother (Vanessa Redgrave) turn up and go on the journey to find Lorenzo.

SA: Your character, Charlie, has an English accent. How difficult was that for your character to master? 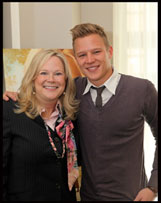 CE: We had a great accent coach that made it really easy for me. Even from the moment I first read it (the script) I always imagined it in that really posh, over the top, English accent. I had taken a few characters in my head like a Hugh Grant or Colin Firth – we’re sort of used to seeing that English character so I thought that just matched Charlie perfectly, especially with that arrogant attitude that he has. The accent seems to go hand in hand with it.

SA: Well you did a wonderful job…very believable. The onscreen chemistry between you and Amanda Seyfried…

SA: Thank you! I did a little research on that to make sure that I did! Did the romantic location of Italy have anything to do with the chemistry? It’s such a beautiful film location!

CE: Yes, well, she’s very down to earth and we clicked straight away. She just wants to have fun and I’m the same too. Also, Gary Winick, the director, created an environment for us too, because he’s a big kid. No one took it too seriously so it was very easy to get into a creative zone. I think Italy is a character itself in our movie so it wasn’t very hard to feel romantic when we’re doing all our scenes in Sienna and under the stars. Its just kind of perfect…it helps you!

SA: You know the first film I reviewed for Amanda was the film, Mamma Mia (2008) and I thought she was fabulous. Her singing and dancing abilities were wonderful. Would you like to work in a musical someday?

CE: Well, I started out in musicals, actually. That’s a great question. The first thing that I remember as a young kid was doing musicals. I loved it. That’s where I really found passion for the creative arts. So, yes, definitely. It’s been a while since the old vocal chords have been given a test but I think I could get them warmed up again and get back on stage.

SA: I’ve recently interviewed three of the original cast from West Side Story (1961). Rita Moreno, Russ Tamblyn and George Chakiris. I was wondering what part you played? I know that you were in West Side Story in the past.

CE: Yes, I played Baby Jon. I still, today walk around doing the, we are the Jets (snaps) song all the time (laughs).

SA: Next year, the film will be 50 years old! I think that you would be great with Amanda in a musical would you like to do that?

CE: I would, I would! I wonder how long we’d have to wait before we can do something together again? You know, the whole, Leonardo DiCaprio and Kate Winslet thing. Do we wait ten years or…(laughs)?

SA: Oh, I hope not (laughs)! Well, of course, I have to ask you about working with the legend, Vanessa Redgrave.

CE: Well, that was the real highlight for me. It was my first significant movie and for that to be with Vanessa as my grandmother is a real privilege. We had a great connection. She’s a great veteran actor. I haven’t done many jobs and she’s been around for a long time and she’s worked with so many great actors? She was just so normal, real and down to earth. She made it very comfortable for both Amanda and I to work with her.

SA: I was doing a little research on Vanessa and Lorenzo who she finds…I couldn’t believe it! Would you like to tell our listeners about that? It is pretty incredible!

CE: I think that’s a nice trivia for the movie, for those that know they’re together and for those that have seen Camelot (1967) the first movie that they worked on together. I think it’s a pretty emotional moment when you see them together on screen. It’s the first time he’s done a major American movie in a long time so I think that it made both their working experiences so great on that movie…being there together.

SA: Yes, and reuniting. They had a son 37 years ago and they were married New Years Eve 2006…love lost and love found. I just got the chills when I was reading about it. And they are pretty amazing when they meet too! The moment is just incredible.

SA: How was the transition from living in Australia to now, living in Los Angeles?

CE: It was good. It was my dream. I wanted to pursue acting. I had finished a TV show in Australia and I knew the best place to work and find opportunities was L.A. So, I got really lucky to be able to start working pretty soon and kept on a bit of a roll…

SA: That’s fantastic. Are you still able to enjoy some of the same sports? I know my son was there recently and he surfed! Do you surf in L.A. at all?

CE: (Laughs) Not really. I grew up on a really great beach that was two minutes away so the idea of driving 40 minutes to a beach is a bit hard to comprehend when you just walked to the beach (laughs). Whenever I go back to Australia I’m back out in the surf again. I have three brothers that surf as well so we’re kind of a surfing team.

SA: I would imagine your waves are a little bigger than ours too (laughs)!

SA: I also read somewhere that you took up yoga or you tried it?

CE: Well, my ex-girlfriend was a yoga teacher and health fanatic and she introduced me to it. And all these people in L.A. always talk about yoga (starts talking in a yuppie, American accent) “yoga, oh my god its so great (laughs).” It’s almost like a cult, you know? I was so sick and tired of people talking about yoga and then I tried it one day and then I was like okay, now I know what everyone is talking about because it really is a great workout. I just don’t take it as seriously as so many people do.

SA: You don’t have your own yoga mat yet (laughs)? It’s so funny. L.A. is a different world isn’t it?

SA: What do you like most about being an actor?

CE: Well, I think there’s an element about it like me being a kid that gets to dress up and transport himself to a completely different time. The first job I got was a period piece a roman-epic. I’ve played a couple historical characters that have had some meaning to me. I think it is definitely being able to transport yourself into a completely different person and learn about personalities of people that you would never normally learn about in daily life…you go much deeper into a person. It’s definitely that and just being a big kid and playing dress up. I like to think of it as a kid because if I don’t, I take it too seriously.

SA: I sense that you have a real passion for what you’re doing.

CE: “The Vision” by Rick Joyner

CE: (Stumped…) That’s a tough one. I wasn’t prepared for that one. I haven’t been asked that (laughs). Vanessa Redgrave (laughs). Its true!

SA: Oh I know, just seeing her in the first scene in the movie. You’re just like, ‘oh my gosh, there she is!’

SA: What would you like your fans to know about you?

CE: (Jokingly) Well, people ask me all the time…(laughs)

(Words from his entourage in the background, “Where’d you get that body from?”)

CE: (Laughs) Yeah, right, where’d I get that body from (laughs)? It’s not just acting. I’m very interested in the other sides of the business as well like directing and writing. That’s something I wish to venture into as well.

SA: Anything else you’d like to say about the film, Letters to Juliet?

CE: Just enjoy it! I hope people can go in and jump in the car with us. That’s the feeling we want with the movie…that you come in that car and go on the journey with us so I hope you enjoy it.

SA: Yes, like a road trip through Italy, just beautiful!

CE: Yes! What could be better? Seriously.

SA: I want to thank you so much for chatting with me today and best of luck with the film!

CE: Thank you for having me, thank you!