Chicago is always an exciting place to be, whether you are checking out blues music and festivals, sporting events, cutting-edge cuisine or spending a day at the beach. It’s no wonder that Chicago was chosen by the World Wildlife Fund (WWF) as the 2014 Earth Hour Capital. The Windy City was selected after a yearlong competition and will receive a $30,000 grant from the World Wildlife Fund to further develop sustainability programs. 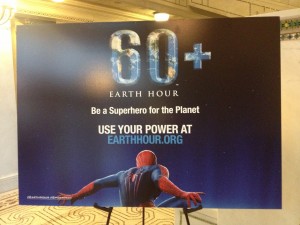 Earth Hour is observed on March 29 from 8:30 – 9:30PM (local times) in nearly 150 countries by turning off all of the lights. As the 2014 Earth Hour Capital Chicago got a special guest to help save the planet. On March 29, 2014 at the Chicago Cultural Center Spider-Man helped flip the ceremonial switch and unveiled a glow-in-the-dark painting by Chicago artist ZORE64. The original artwork was inspired by Earth Hour’s mission to raise awareness of the impact humans, both with super powers and without, have on the environment. 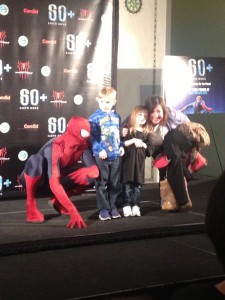 The Chicago Cultural Center had a long line of Spidey fans, families, artists and environmental superheroes spiraling up the staircase waiting for the doors to open, especially since the first 400 people received a super cool glow-in-the-dark t-shirt.  It was a high-energy event with a live DJ, a face painting station and photo opportunities with Spider-Man himself.

When asking Chicagoans at the event what they do to help save planet they quickly proved their status as superheroes. 6 year-old Connor, accompanied by his aunt Beth, said he turns off the faucet while brushing his teeth and makes sure to turn off the lights when he leaves his room. A father-daughter duo from Hyde Park noted that they always use canvas bags when shopping and recycle cans and bottles whenever possible. Chicago and the rest of the world will definitely be in good shape if we have people like Connor and Devon leading the way! 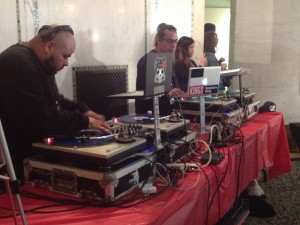 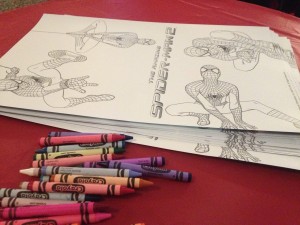 The stars and director of the upcoming film The Amazing Spider-Man 2, Andrew Garfield, Emma Stone, Jamie Foxx and Marc Webb, have pledged support to one Earth Hour Blue crowd-funding project each. Join them and use your power to support ‘A Flame called Hope’, ‘Puppy Protectors’, ‘Light Up a Village’ & ‘Power Up a Ranger’ today! In a world more plugged-in, connected and online than ever we often can’t imagine what life would be like without all of our gadgets and entertainment, especially movies. Everything we do uses some capacity of energy and it is important to know that every act of support helps, no matter how small. There are things each one of us can do every day to create a healthier and cleaner planet. 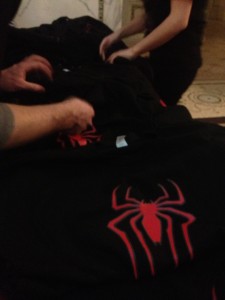 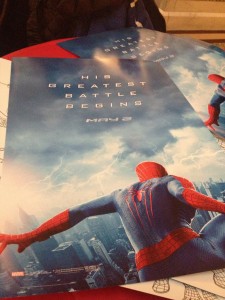 Columbia Pictures has set a precedent with The Amazing Spider-Man 2, which opens in theaters May 2, 2014, not only in the carbon-neutral status of the production but in creating an exciting next chapter in the franchise that fans will be sure to love. Please join Spidey and the cast and crew of this incredibly action-packed movie in making a difference. Be a superhero for the planet! (Check out more photos here!)