Below is a list of the 20 films I screened listed in order of preference with capsule reviews, here are reviews for 6-10.

The film centers on female standup comics, yet the title implies a mixed message as in women can be hysterically funny, yet the word hysterical was used to define women as crazy in the past. Yes, crazy in the sense that women should simply sit back and be still. These professional comedic women are doing nothing of the sort; they are working standup comic gigs throughout the country so they can be heard far and wide.

“Hysterical” follows the comedians through their rise into cultural relevancy, and we discover just how hard it has been for them.  Slow and easy pacing gives each comic time to share their accounts. The misogyny is apparent and frustratingly so last ‘years’ ago. It’s about time for a change in the comedic profession. The brave women speak out, and it’s refreshing to hear their honesty.

Andrea Blaugrund Nevins is the director.

In what can be described as screen legend Udo Kier’s role of his career, “Swan Song” gives him the freedom to spread his wings and fly. He plays retired hairdresser Pat Pitsenbarger living in a senior housing nursing home just outside of Sandusky, Ohio, of which writer/director Todd Stephens utilizes in many of his screenplays as this is his hometown.

His monotonous days are spent folding napkins while he’s constantly scolded by staff members about his secret smoking. Suddenly his world is jolted as he’s asked to prepare a former well-known, wealthy client’s hair for burial. One in which he had a major falling out, yet is impressed by her request, he says sarcastically,” Bury her with bad hair.” He embarks on a journey of nostalgia as we met former friends and townsfolk that help him along the way not only to find hair supplies, but answers to past questions Pat has about his life and his clients.

Having met Udo Kier several months ago during a zoom interview, I have to say he’s one of my favorite interviews of my career. For me, seeing him in this role brought a smile to my face as he carries it from the first moment he’s on stage until the credits roll.

Keir’s chandelier dance should be seen and enjoyed by all, it’s a film defining moment. Talk about “I’m Too Sexy for my Chandelier” he knocks himself off the runway with that number. One of my new favorite movie scenes ever. 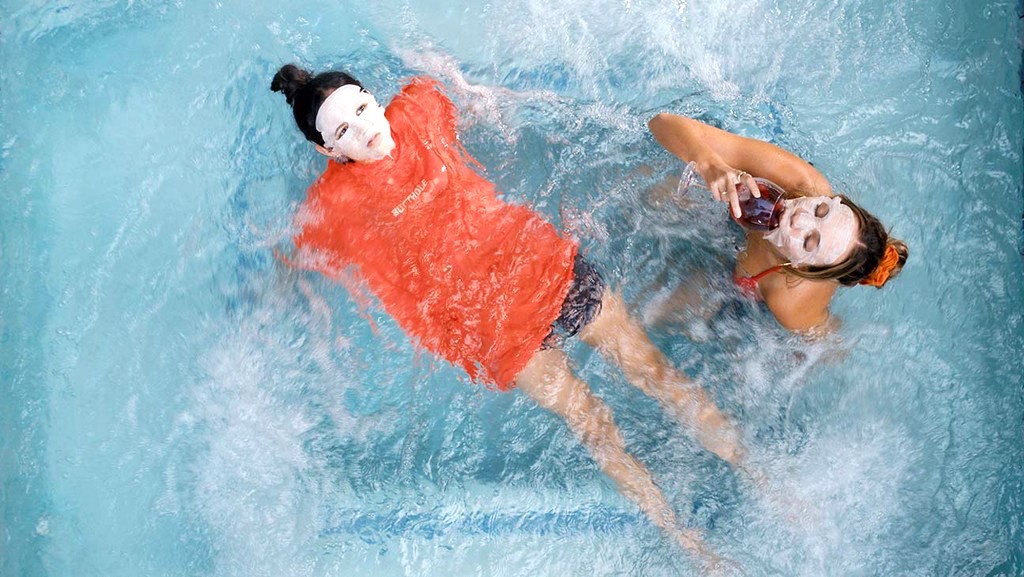 Here’s a powerful film centered on High School teens in a tense situation with a live shooter in their School, Vada (Jenna Ortega) and another classmate, Mia (Maddie Ziegler), and Quinton, played by Niles Fitch, who has his wounded brother’s blood all over his shirt, lives are changed forever. Writer/director Megan Park explores the aftermath of the psychological trauma that follows after such a shocking event.

Park’s narrative is dreamily slower as we see the long days and nights consumed with reliving the events and the need to decompress. All three students now have an exceptional and forceful bond that carries them through the days ahead toward healing.

The muted sound design, along with long moments of silence broken only through texts and the sound of a phone buzzing, creates a sense of loss. The technique creates moments for all to take deep breaths and reconcile what has actually occurred. The parents try and hover; although love is apparent. Space is what’s needed and the company of those who experienced the tragic event. Excellent filmmaking with a focus on the different modes of grieving. 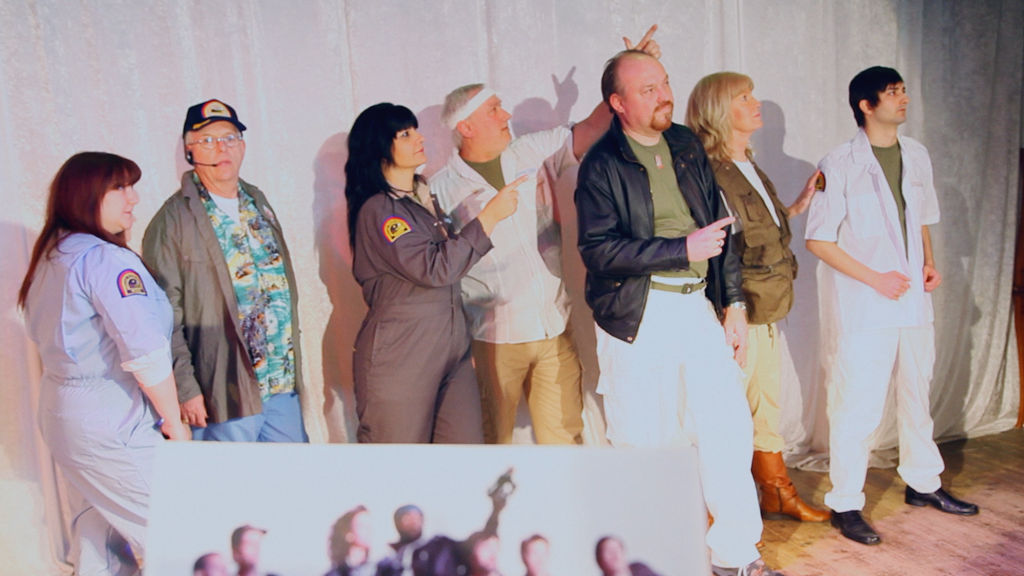 The refreshing and uplifting “Alien on Stage” tells the story of a group of amateur English performers who had a dream of performing the movie “Alien” at their local theater—little did they know that the play would become and hit and end up at the famous Leicester Square Theater in London. Filmmaker’s Lucy Harvey and Danielle Kummer lead us on a heartfelt journey of a group of bus drivers that had a dream to perform.

Indeed, a story about passion, resolution, and fulfilling a dream utilizing creative talents. Speaking of talent, these actors were bonafide amateurs, which didn’t matter as they were having the time of their life. The roaring applause at the end of their early performances signaled that perhaps the group is on to something bigger—indeed they were as eventually they performed to sold-out crowds in London’s posh West End.

Having seen the clips of the play, I, too, would have loved to see the play live. The heart of this play is genuine, where all are winners. “Alien On Stage” shows the inspiration as day workers let their creativity flow by donning astronaut suits to step out of their lives, as the respite gains self-rewards. The props and set design are nothing short of hysterical, as most are made out of household items.

Celebrating dreamers and working together to create something extraordinary is the icing on the cake for the group. It’s the ultimate fan tribute as well.

“I’m Fine (Thanks for Asking)” 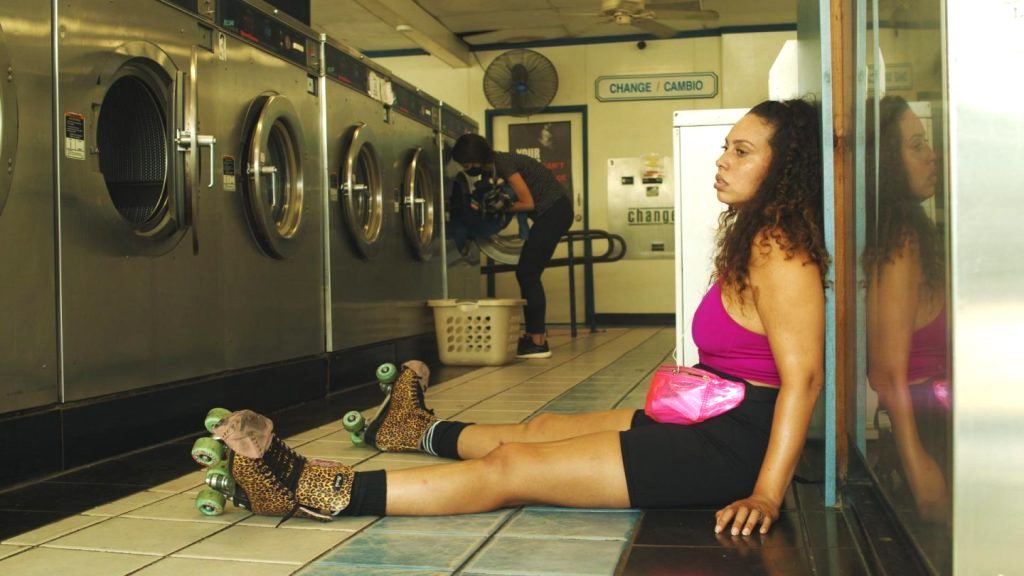 A single mom, Danny, who becomes homeless, convinces her 8-year-old daughter that they are camping in a tent for fun until she can work to get them a brick-and-mortar home. Writer, director, and star Kelley Kali provides a day in the life of a grieving widow who tries to secure housing for her family during current times, of which we are smack dab in the middle of a pandemic. Using roller skates as her mode of transportation, she desperately tries to work to save for rent money.

The team of Kelley Kali, Angelique Molina, and Roma Kong together take on a houseless single mother’s challenges while crafting a tale that tugs at the heartstrings. Covid is front and center, along with the feeling of hope. We see Danny being asked, “Are you okay?” She answers, “I’m fine,” when in reality she’s anything but fine. Her daughter starts asking when they are able to go home, and Danny has to make promises she may not be able to keep.

As the film progresses, we see the frustrations and the continued resourcefulness in which Danny handles her situation. Poignant and realistic are words that best describe the film.