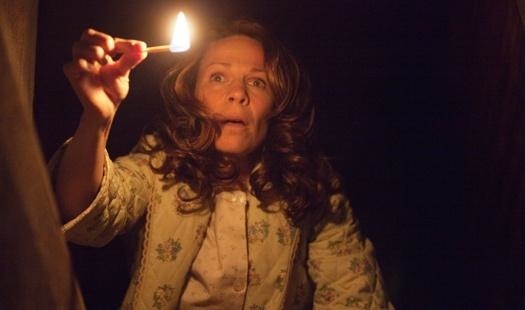 Scariest Film of the Year

Just when you thought the era of cheesy scary films would never end – “The Conjuring” surfaced. Creator of the “Saw” franchise James Wan (“Insidious” 2010) conjures up a terrifying film of supernatural terror with the adaptation of world-renowned paranormal investigators Ed and Lorraine Warren’s most disturbing case. The Warren’s (Patrick Wilson, “Prometheus” 2012 and Vera Farmiga, “Safe House” 2012) must attempt an exorcism for a helpless family who is being haunted by a powerful demonic entity while trying not to let it effect their personal lives.

The Perron’s moved into their dream home tucked away in a small country town in Rhode Island. The farmhouse is incredibly old and could use some fixing up but that barely fazes the elated family of seven. Although, the bliss doesn’t last long. It all begins when their dog, Sadie, stands on the porch shaking profusely and refuses to enter. While the daughters are playing a game called hide-and-clap one of them discovers a boarded up entrance to an unknown cellar. Over the next few days, the daughters complain of an obnoxiously rotten smell in their rooms, creaking doors and the feeling that someone is pulling at their feet in their sleep. Carolyn wakes up with a mysterious new bruise everyday and doctors have convinced her it’s anemia. Unfortunately for the Parron’s, this is only the beginning…

The brilliant and convincing cast is one of the many reasons why this film works. It’s more than your run-of-the-mill haunted house horrors. You will not find a slew of special effects here, either. “The Conjuring” certainly conjures enough dark corners, creaky floorboards and eerie occurrences for continual, unexpected audience reaction.

The carefully plotted camera work, editing, sound effects, lighting (or lack thereof) and fairly simple technique is the cornerstone of Wan’s magnificent direction. Like many horror flicks, “The Conjuring” had the potential to be cliché and overdone with gore and violence. Although an old-fashioned setting and character-focused storyline, Wan ensured that cliché was not possible.

Taylor, Farmiga and Wilson all deliver outstanding performances. Taylor’s multifaceted role as Carolyn is incredibly convincing. Farmiga is strong, caring and determined, as Lorraine while Wilson’s rational nature completes her other half. As a duo, their chemistry, brains and common sense is apparent.

Some scenes in the beginning are a little hokey as while moving into their new home everyone seems to be in a peachy mood and more than willing to help each other unpack. Let’s face it, whoever thinks moving is fun has never actually done it. I will not hold those few scenes against this film, however.

It is important to note that this film is not rated ‘R’ because of the usual suspects – sexual content, drug use, gore or harsh language. The paranormal-basis is just that creepy. The fact that this film is based on true events adds that second shiver down your spine.

Bottom Line? For someone who is generally unfazed by horror films I can certainly say this one will scare the skeptic out of you.