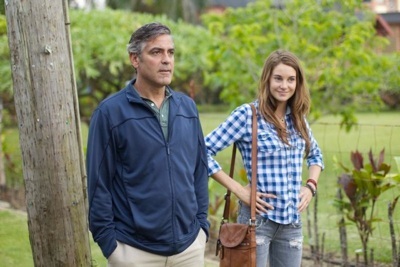 Actors George Clooney (L) as “Matt King” and Shailene Woodley (R) as “Alexandra” on the set of THE DESCENDANTS. PHOTO BY: Merie Wallace Fox Searchlights Studio

If you liked the wacky/hysterical film “Sideways,” you’re going to love “The Descendants.” Director Alexander Payne’s Hawaiian based comedy/drama starring George Clooney (Matt King) is a slice of tropical cinema paradise for viewers. Both films (directed by Payne) have the same tone, as serious human emotions are paired with comedic situations, however, the quick-witted script and even temper of “Descendants” surpasses “Sideways.” By far, the best comedy of the year and, in my mind, this film should be on the Oscar ballot for best picture.

The extraordinary acting by Clooney (Academy Award winner for Best Supporting Actor in “Syriana” 2005) demonstrates his abilities and ensures his place in the forefront as one of Hollywood’s finest. Here, we see Clooney as a truly troubled dad and husband. Once, the film settles in, he becomes Matt King (Hawaiian shirt, flip-flops, shorts and scruffy-bearded), not the suave, handsome, chiseled jaw Hollywood star we have all come to know.

Matt is a workaholic successful attorney who has been thrown a curve ball when his wife Elizabeth (Patricia Hastie) slips into a deep coma after a boating accident. As a result, he’s forced to step up to the plate and become a ‘hands on’ dad to his two daughters. A quandary for sure, as he refers to himself as, “the backup parent.” He also discovers that his neglected wife was having an affair with a real estate agent.

Alexandra King (Shailene Woodley) is the 17-year-old daughter who has been so rebellious in the past that she attends boarding school. Upon her return, she puts on a brave front and becomes determined to help her father, while at the same time figuring out what matters most to her in life. Scottie King (Amara Miller) is the pre-teen daughter who has been ignored and is starving for attention − of any kind, even negative attention. Matt’s been out of the parenting game so long that he really doesn’t have a clue. At one point he ends up pleading with both girls to cut him some slack. These young actresses are new to film and handled the parts flawlessly. They were a joy to watch.

Adding further conflict, Matt is the direct descendant of a Hawaiian princess (his great, great grandmother) and has been granted primary decision inheritance rights to 25,000 pristine acres in Kauai − that land developers are at his throat to purchase. The pile-on to this dilemma is a circus of extended family, whose ringleader is played by his greedy cousin Beau Bridges. They are all chomping at the bit to sell the property and reap the benefits.

Wry in humor, Clooney narrates the opening scenes by stating when most people think about Hawaii they envision a vacation paradise, not stopping to think about the people who live on the islands. To paraphrase, “We have the same problems as people on the mainland, our families get cancer, we have heartache and homelessness.” As the film unfolds, we find out rather quickly that Matt has major life problems and we’re simply along for the ride.

Hawaii as a setting is also portrayed as a main character. The lush tropical islands are front and center. Payne’s sets are filled with vibrant colors and beautiful coastlines. The cinematography is breathtaking and showcases our 50th state in all of its glory.

The film’s tone reminded me of other comedy geniuses, the Cohen brothers, especially one particular scene that’s featured in the trailers. When Alexandra breaks the news about her mom’s affair. King, bolts up and begins running to the neighbors house fists clenched, full speed and sporting a rather determined scowl on his face. The next scene he point blank asks his neighbor and his wife’s best friend to ‘spill the beans.’ “Who is he?”, demands King. The conversation progresses to perfect comedic timing by all. Matt’s over reactive behaviors and the script’s wacky dialogue lightens this serious topic.

Matt decides next to find the guy (Brian Speer played by Matthew Lillard) and inform him of his wife’s condition. As viewers we know by this point (through the development of Matt’s frazzled character) that he has another agenda in mind. We’re just not sure what. That’s the beauty of ‘Descendants’ – no predictability in story plot lines. We are continually kept guessing.

Bottom-line: Plenty to like in this tour-de-force comedy. Seeing it on the big screen is a plus as the cinematography is gorgeous. It’s also enjoyable to laugh with a crowd.

Screenplay: Written by Payne, Nat Faxon and Jim Rash, based on the novel by Kaui Hart Hemmings