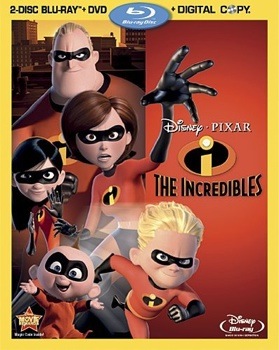 Disney Pixar’s “The Incredibles” now on Blu-ray™ and DVD

“The Incredibles” is an animated Disney Pixar film that has just been released on DVD and Blu-ray. It’s quality family entertainment, that’s geared toward both parents and school age children. When the film debuted in 2004 it was a huge box office hit. The storyline relates to everyone and the end result is that of exemplary family viewing.

The Incredible family is unique to say the least, as they are a family of superheroes. Mr. Incredible (voiced by Craig T. Nelson) who was once adored by millions as a superhero is now going through somewhat of a midlife crisis. People began to resent superheroes for various reasons. This caused many superheroes to go underground, with a little help from the “Superhero Relocation Program.” Once in the program, a new life is offered and in return, a promise is made to never act as a superhero again.

At first, Mr. Incredible and his wife, Elastigirl (voiced by Holly Hunter) lived happily as Bob and Helen Parr. Their children, speedy Dash (voiced by Spencer Fox); shy, shrinking Violet (voiced by Sarah Vowell); and baby Jack-Jack were distraction enough to forget about their past lives. Unfortunately, the daily office grind began to wane on Mr. Incredible. He now yearns for the old days when he and his friend, Frozone (voiced by Samuel L. Jackson), would listen to the police scanner, rush to the scene of a crime and unexpectedly ‘save the day.’
Brad Bird is the film’s director and his vision has resulted in a unique animated family film that is actually cool to watch even as an adult with no kids. The action scenes and overall story make this a winner with all ages. A classic in its own right, “The Incredibles” will be around for years to come.

Blu-ray Disk:
Includes Bonus Features Plus All The Classic DVD:

• Paths To Pixar: Story Artists – Pixar story artists providing viewers insight into their work, their inspiration and the personal paths that eventually led them to a career at Pixar.

• Studio Stories: Gary’s Birthday – How do you make a movie when there are not enough work days and too many birthday parties? This feature showcases how The Incredibles crew solved the problem.

• Ending With A Bang: Making The End Credits – Interview with Director of Photography Andy Jimenez and Character Designer Teddy Newton about the process of creating the end credits for the film.

The DVD in the 4-Disc Blu-ray Combo Pack Includes:

Bottom-line: This one’s a winner!