Broadcast film critics gathered at the Four Seasons Hotel for a luncheon followed by a press conference with Martin Scorsese, Robert De Niro, and Al Pacino. When the three walked into the room, it was as though Hollywood royalty took the stage. And, to witness all three of the talented filmmakers together is similar to winning a trifecta.

The excitement was high; the atmosphere was jovial and appreciative. Numbers were drawn, and if your corresponding number is called, you are the chosen journalist to ask a question. Luck was on my side that day as Jennifer Merin, the President of the Alliance of Women Film Journalists number was called, as a writer for #AWFJ I was indeed thrilled. Truth be told, I also had a strong feeling that Jennifer would ask an intuitive question, and yes, she certainly did.

Merin started by saying, “Thank you very much for a brilliant film and for all of your work that you’ve done throughout your careers. In watching this film, I think I felt a seismic shift in your movie making. There is a real connection here to concern about social impact and the effect that film can have in the world. And you’ve been obsessed and working on the issue of corruption and crime for many, many years. I’m just wondering, you came into this with a notion of, or you feel that there has been a change in the overall structure of the film and the overall intent of the film with regard to social and political issues of the day.” 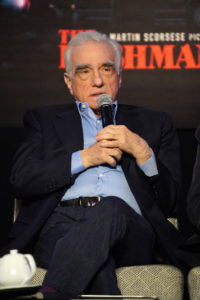 Martin Scorsese, “Well, yes. There was a change. And having gone through “Mean Streets” and “Goodfellas” and “Casino, “you know, I had covered the territory in specific ways at those times, you know. The overall issue of corruption is something that I tend to be attracted to as material. And what happened with this, with Frank [Sheeran], when you described the character to me, and I read the book, the book had this whole backdrop of this history. Their history. The history of the United States, the world, all that’s going on. 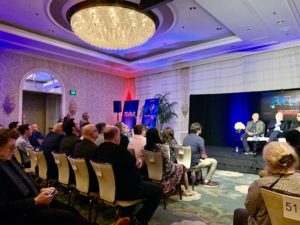 And I said I think I know what to do. I think it’s a matter of just having to cut the whole thing down to its essentials and deal with the emotional impact ultimately of the life you lead. You know. And everything else, whether it’s Cuban Missile Crisis or Joey Gallo being shot, it’s all peripheral, all forgotten about ultimately. And so in a way, it freed me.

In terms of corruption, that part of a human being, in “The Asphalt Jungle,” Louis Calhern has a line that’s great where it goes, his wife says why do you always — he’s a lawyer — why do you always defend the bad guys and gangsters and that sort of thing? He goes, well, I look at crime as sort of a left-handed endeavor of the human condition. And, yeah. You know. The whole sense of that’s part of who we are. And it’s always there. The dark forces are always there. Do we succumb to them? All the time. Do we get sucked in and pulled back out? I mean, this is the whole thing. It has to do with our pride, too, in the case of Jimmy [Hoffa] when he keeps saying it’s my union, it damn well is his union, but he lost it. He lost it. In any event, it’s more than corruption. It’s about what’s in ourselves as human beings.” 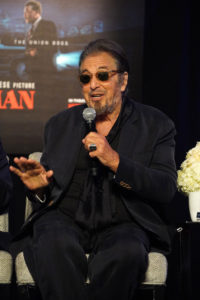 When asked about choices that have been made in terms of their careers, Al Pacino started by joking, “Well, I really had trouble deciding whether I should do “The Godfather” or not. [The room bursts into laughter.] Pacino continues. It was a life-changer. But at the same time, it’s all relevant. It’s relevant to where you are and that time in your life. So a decision you make based on instinct is different than this, you know. I made a couple of choices that, in terms of life choices as your work is your life, too. I made a couple of choices that turned out to be really very great for other people. 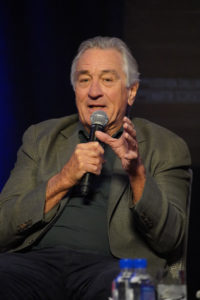 Robert De Niro said, “Well, yeah, I mean, I’ve had a lot. It’s too complicated to go into in this situation. But I guess in relation to this movie; I’m very happy that we worked so hard to get it to where it is today. Because we worked hard and are a part of something very special, and then I’m so grateful that it seems to be getting a great reception. So that’s a good feeling for me in my life and everybody around me. So I feel really terrific about that. I have so many other life choices that I couldn’t go into. In a book, you could do it, but here, with this, whatever, so. I hope that’s a decent answer.” 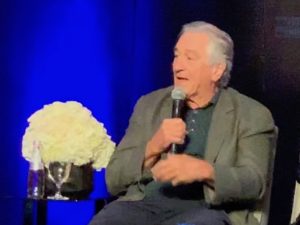 Martin Scorsese, “Well, I mean, it’s a complicated thing, of course. I’ve found that over the years, the choices I made in terms of making films, it got to a point that each film is another lifetime. And I went ahead and made choices as to what I felt comfortable with. I tried some experiments from time to time, but in so doing, I backed out of two or three major movies that became very popular and very famous and award-winning and that sort of thing, but I couldn’t find my way in there. I didn’t know why until years later. Years later, when it became… so I always had this line about the professional and the amateur in a way. If I stayed an amateur, I think that was pretty good. An amateur, the word love is an amateur, you know. I’m not putting down professionals. I always wish I could be. But it took me a long time to understand that, and I guess I shied away from certain projects because I just didn’t know how to do them. I didn’t feel I had that connection with it. And the connection has to be something personal. And there are other reasons, too. But it’s more layered than what I’m saying. But when the film you didn’t do is a great success, oh no, I couldn’t, you know. I couldn’t do it. And if I had made it, it wouldn’t have been a great success. I don’t mean to be self- deprecating, but what I mean is it would have been a different film. Do you follow? And so like you made your choice.

In terms of cause and effect filmmaking responsibility, several questions were asked about how a person comes to crime, and what are some of the things that makes a person go from good to bad? Do you feel like you have a responsibility to show the effects and also some of the causes? Or do you feel just like creatively I’m just going to make the movie and it lands, it takes me wherever your instincts take you? 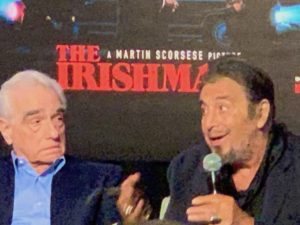 Martin Scorsese, “Sorry, guys, I’ve got to take this. For me, it’s always been for different reasons, personal reasons or whatever, I’m aware of the people that I knew around me sometimes who I knew genuinely good people, but wound up doing bad things. And then ultimately, are they cast out? Are they cast out of a religious institution? Are they cast out of the society around them? In some cases, they are. But in certain religious aspects, if I have made “Silence” and movies like that, you know, the bottom line is the wretched, the ones who couldn’t help it. And the ones who can’t do anything else. They’re the ones that demand compassion. And it’s very hard. And there’s compassion and understand. You may hate it; you may get, you know, I don’t know. But that’s a very important thing to nurture in a human being and not cut people off dead. 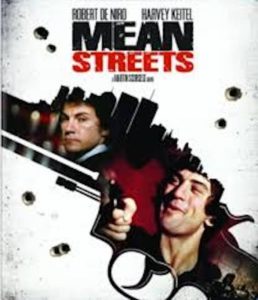 I remember back when “Mean Streets” was shown at the New York Film Festival. One critic was very nice to me at certain times. But this time he hated the film. And well, “Mean Streets” was the first. Then afterward, he was very nice about certain films. Anyway, I don’t want to mention his name. Good guy, let him be. Long-time ago. Anyway, there was another film that ended the festival. “Badlands.” Just a terrific film and I want to mention it because it is a beautiful film and the filmmaker is a good friend. But when the festival was over, the critic wrote that last film, the film I just mentioned, yeah, it’s the front page. Mean Streets is the back page. And I said well, you didn’t like the movie. Then I realized, that’s right. It is the back page. The back page. What? You know. What is that? Human beings. It’s still about–it’s the back page — a guy shot in an alley. Somebody caught and arrested and spends 20 years in life for something, in jail for something that you know, five years later, the law changes. Yeah. What about them? We’re the back pages. You know. So that’s what we’ve been doing.” 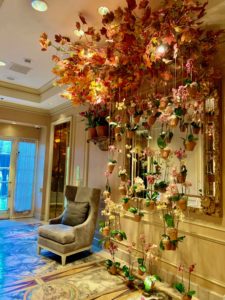 Lasting about 40 minutes, this journalist still receives shivers when recalling that day as to experience these three Hollywood legends in the same room, interacting with each other is the crème de la crème of my film journalist career.