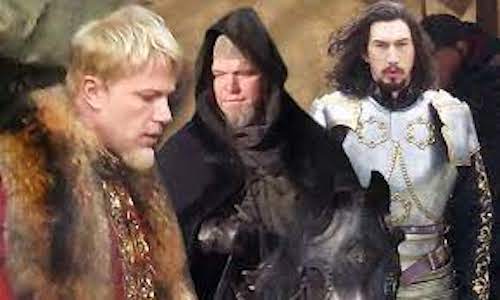 Hi Carl, and hello to all of our listeners out there! Tonight, I’m going to talk about the historical drama “The Last Duel” rated R.

Matt Damon and Ben Affleck reunite as screenplay writers along with Nicole Holofencer. “The Last Duel” marks the first time  Affleck and Damon have worked together since their 1997 Academy Awarding winning film, “Good Will Hunting.”

The film is based on a book written by Eric Jager in 2004 about the last recorded ‘Trial by Combat’ duel that took place in medieval France on Dec. 29, 1386.

Matt Damon portrays a Knight, Jean de Carrouges, in 1300’s France who’s mistreated by a Squire, Jacques Le Gris, played by Adam Driver (who he thought was his friend).

Matt’s wife, Marguerite, played by Jodi Comer, accuses the Squire of unwanted advances. The Knight and Squire then duel until one of them dies.

Director Ridley Scott, at age 83, isn’t slowing down anytime soon, with two films this year on the horizon, and he’s directing Adam Driver in both of them, “House of Gucci” releases in November.

Scott is no stranger to massive epic-size films, as “Gladiator,” Kingdom of Heaven,” and “Robin Hood,” all are historical recreations with remarkable sets and large crowds of period costumed actors.

Ben Affleck plays a bleached-blonde Count, Pierre d’Alencon, and is in constant battle with Damon, who fights in wars under the Count’s orders. I’d say three stars out of four. The script has just the right amount of humor to keep us entertained.

I didn’t care for repetitive storytelling from the three perspectives, especially since we know the violence is coming.
Do we really want to relive that twice or even three times, for that matter. I did enjoy everyone’s excellent performances.

Thanks so much for listening in tonight. This is Sarah Knight Adamson, your National Film and TV critic for Sarah’s Backstage Pass. Com, and I’ll see you next week.