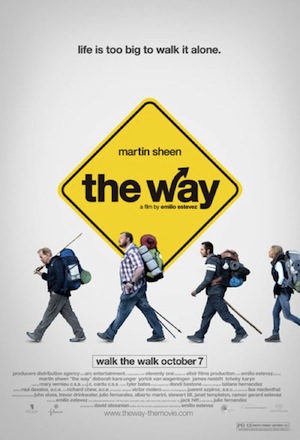 Elixir Films Presents THE WAY starring Martin Sheen
Estevez Takes Dad on Cathartic Walk A car, motorcycle or some such vehicle is generally the mode of transportation featured in a road trip movie, but writer, director and co-star Emilio Estevez (“Bobby” 2006) had other plans for “The Way.” In this drama (with a touch of comedy), Estevez takes audiences on a 500 mile walk, the soulful journey of a man mourning the loss of his adult son, beginning on the border of France and weaving through Spain − a centuries old trek known as the Camino de Santiago. Losing a child is arguably the most difficult hurdle a parent can face, and Estevez has written a story that eloquently captures such a circumstance. Filmed on location, “The Way” features stunning landscapes, a beautiful score and a compassionate script. Estevez’s father, Martin Sheen, stars as Tom, a man whose son (Estevez) has died in a freak storm on his first day of walking the Camino de Santiago. Sheen’s portrayal of a man who goes on an unplanned, introspective pilgrimage is perhaps the best performance of his long and successful career. Sheen has impressed audiences for decades in movies spanning from “Badlands” (1973) to “The Departed” (2006), but is perhaps best known and loved for his television role as the President of the United States in “The West Wing” (NBC, 1999-2006). In “The Way,” Tom, a widower and successful eye doctor, is at odds with his son, Daniel, who chooses to live his life differently than his father. Against Tom’s wishes, Daniel travels abroad to live out his dream of walking the Camino de Santiago, telling Tom, “You don’t choose a life, Dad. You live one.” Shortly thereafter, Tom learns of Daniel’s tragic death and ventures to France to collect the ashes of his only son. While there, he abruptly decides to complete the pilgrimage for (with) Daniel, ashes in tow. Along the way, Tom crosses paths with several others who are also making the walk, all for various reasons. Eventually, he teams up with three unlikely trail mates. There is the cheery Dutchman hoping to lose weight (Yorick van Wageningen), the pessimistic Canadian vowing to kick her nicotine habit (Deborah Kara Unger) and the long-winded Irishman (James Nesbitt), a travel log writer suffering from writer’s block. This motley crew serves as both companionship and an annoyance to Tom, and also provides some merriment to the film. Unger is particularly convincing, her character’s grating sarcasm softening as the trail grows shorter. Tom’s journey is made even more gripping, as Daniel creeps into his psyche through flashbacks and imaginary appearances along the way. The first and last quarters of the movie are the most compelling, with the middle falling behind, if just a step. I imagine, although doubtfully intentional, that this is reflective of a real life excursion of this magnitude. Bottom Line: Estevez has written and directed a fine movie, giving his dad, Martin Sheen, an opportunity to shine once more. It is a beautiful, somewhat spiritual film, one that’s both heart wrenching and uplifting, and one that adults can feel good about seeing with their parents. Cast: Martin Sheen (Tom), Emilio Estevez (Daniel), Deborah Kara Unger (Sarah), Yorik van Wageningen (Joost), James Nesbitt (Jack) Credits: Written/Directed by Emilio Estevez, Produced by David Alexanian and Emilio Estevez, Studio: Elixir Films Run Time: 1 hour, 55 minutes Written by Tyna S. Cline © October 25, 2011