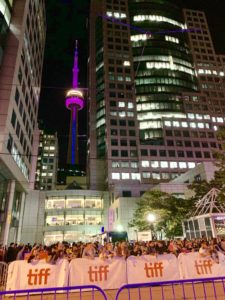 In showcasing the glamour of Hollywood and the breadth of worldwide cinema, the Toronto International Film Festival, a.k.a. TIFF welcomed hundreds of thousands of moviegoers and members of the press September 5 through September 15. Navigating as a first-timer requires pre-planning and a bit of networking—as the vast amount of films, special events, Red Carpet opportunities, interviews, panels, and Q&A’s can be challenging. Thankfully initial reaction after settling in was one of pure delight and relief. In part, my securing nine tickets to films that were in my top 15 to view certainly had something to do with my elation.

In all, I screened 12 films, attended the pre-party at the Soho House for the movie “Cave,” interviewed talent on the Red Carpet for the films, “Dads” and “The Laundromat,” interviewed director Atom Egoyan and Luke Wilson for the film “The Guest of Honour,” snapped photos of the “Dolemite is My Name” costume and prop exhibit, and stayed for all Q&A’s after the films. Here is a list of films I saw, ‘Knives Out,” “Dolemite is My Name,” “The Guest of Honour,” “Harriet,” “Ford vs Ferrari,” “Judy,” “The Goldfinch”, “A Beautiful Day in the Neighborhood,” “Dads,” and “Jojo Rabbit.”

Films that I was unable to see “Marriage Story,” “Clemency,” “The Report,” “Parasite,” ”Honey Boy,” ”The Two Popes,” ”Just Mercy,” “The Chambermaid,” and “Portrait of a Lady on Fire,” I saw three weeks later at another film festival with the addition of “Hustlers,” “Joker,” “Motherless Brooklyn,” in a theater near me and “The Laundromat, The King, Pain and Glory, and ”High Life” are streaming on Netflix.

What I found interesting were the additional screenings of popular films, as with “Parasite” and “Waves,” the festival buzz, garnered more opportunities to see popular films. I also appreciated chatting with festival-goers about their favorite films and the appreciative applause from the audience as the credits rolled — also, the standing ovations when the talent took to the stage after their films. And there were the touching moments of the grateful tears of Bryce Dallas Howard and Renée Zellweger, the playfulness of Taika Waititi with his star of “Jojo Rabbit,” Roman Griffin Davis and the extra-long uproarious standing ovation for Canada’s own Christopher Plummer. TIFF did not disappoint; rather exposed me to talent and a wide variety of films that I may not have seen until a much later date, it was a satisfying personal experience.

Lorene Scafaria’s “Hustlers,” Marielle Heller’s “A Beautiful Day in the Neighborhood,” Céline Sciamma”
“Portrait of a Lady on Fire” and “Bryce Dallas Howard’s “Dads,” were just three of many standouts in a great year for women filmmakers at TIFF. I felt like the bar was finally being raised by the inclusion of such wonderful female-driven films. Not to forget the anticipation of “Harriet,” of whose director is Kasi Lemmon, a beautifully told historical story, with excellent acting, that warranted a script revision as it needed to dig deeper with the characters and relationships. 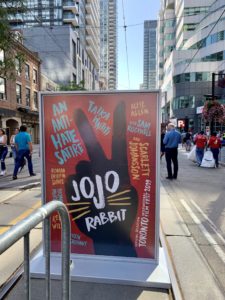 As TIFF completed its slate on Sunday, Taika Waititi‘s anti-hate satire “Jojo Rabbit” won the coveted Grolsch People’s Choice Award. Runners-up for the prize was the drama “Marriage Story” by Noah Baumbach, and “Parasite,” a thriller from South Korean director Bong Joon-ho that also took the Palme d’Or in Cannes this year. “Marriage Story,” “Parasite,” and “Waves,” surely had some fans disappointed, although the creativity of “Jojo’s” script and the stellar performances by the cast won audiences over.
TIFF also sets up the chatter for awards season, and from the excellent slate of films I screened, it’s going to be an exciting year.