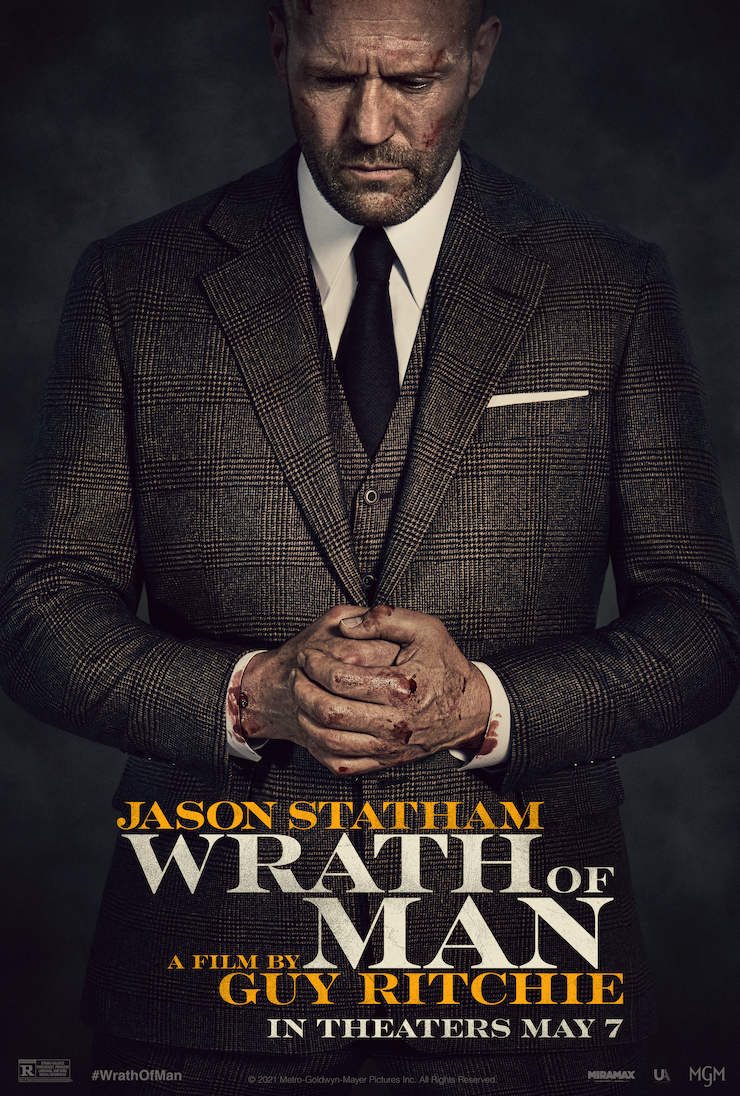 Guy Ritchie fans will know what to expect going into “The Wrath of Man” for newcomers—violence, male comradeship, guns, nicknames, dry humor, and tone-setting musical scores are the norm. Reuniting Jason Statham (“Lock, Stock and Two Smoking Barrels” 1998) with Ritchie is an excellent choice as it’s perfect for raising the stakes in his signature violent films. Statham is at the top of his game here; his personal vengeance cuts to the core—he will stop at nothing, which is precisely why the film is brilliant.

Harry, aka H (Statham), works for Fortico, an armored truck company located in Los Angeles that transports millions of dollars for clients. The drivers’ nicknames, Hollow Bob (Rocci Williams). Bullet (Holt McCallany), Boy Sweat Dave (Josh Harnett), and Dana (Niamh Algar) are part of the crew that risk their lives every time they make a run. Their locker room banter is crass; the woman who keeps her eye on one of the bank’s vault is nicknamed Hot Betty; their jokes and crude language are worse.

Ritchie sets up the film in four chapters, with clever names; A Dark Spirit, Scorched Earth, Bad Animals Bad, and especially the last chapter, Liver, Lungs, Spleen, Heart. When H’s car is attacked by a gang of robbers looking to steal the money, the tone is set going forward as he doesn’t follow safety protocol. He pushes through to the danger and effortlessly kills all involved, including Post Malone’s robber character. The aftermath propels all at the Foritco company to not only mistrust H; one co-worker says, “I’m beginning to think he’s a psychopath.”

Soon the mysterious story of H unfolds as to why he’s working at Fortico and the fact that he’s blatantly overqualified to be a security guard. As not to include spoilers, we’ll skip over the ‘why’ for now and talk about another new member to Guy Ritchie films, Scott Eastwood, as Jan., The villainous gang, turns out to be in various illegal activities, including the scum of the earth business of human trafficking, more reason to applaud when they are faced with H’s rage. Eastwood as the villain has a colossal amount of screen-time, of which Ritchie’s sharp lens and close-ups of his snarling face creating a criminal image that will be forever imprinted in cinema.

All of the action is accentuated by Christopher Benstead’s sinister score, setting the tone for ultimate doom. Statham, is without a doubt, one of the best action heroes in film today. Since his Chev Chelios high voltage character in “Crank” 2006, I’ve been a fan when he displayed his talents as a fearless rough, and tough guy that doesn’t let anything or anyone stop him. If you’re in the mood to see gun violence, revenge, blood, and carnage, H’s wrath could be your choice for nonstop action movie viewing.