In a year of attending several film festivals, either virtually or in-person (Toronto International, Cannes, SXSW, Chapel Hill’s Film Fest 919), I can say that I continue to be impressed with the storytelling and the magic of film. This year’s top ten list brought a variety of creativity, comedy, history, music, and drama.

Kenneth Branagh’s “Belfast” is hands down my favorite film of 2021; it’s a universal story of a loving family in times of violence and conflict in their community. Typically, generational stories are of interest to me, and viewing Judi Dench as a grandmother in a nuanced yet powerful role was outstanding.

Steven Spielberg’s remake of the musical “West Side Story” presents the talents of a seasoned director’s vision to highlight the emotions of cultures. The autobiographical film “King Richard” shows another family living in an unsafe neighborhood and a father’s strong will to protect and care for his family. “Spider-Man: No Way Home” is the movie I had the most fun watching; the nostalgic touches, humor, and special effects are tremendous. Disney’s “Cruella” was a feast for the savvy fashion viewer with solid performances by Emma Stone and Emma Thompson. Kristen’s Wiig’s “Barb and Star Go to Vista Dell Mar” was a complete joy and an ode to “Bridesmaids,” indeed a slice of female comedy at the highest level. “Passing” is a profound film, focusing on friendship, racial differences, and human nature; the performances are tremendous. “Spencer” was tough to watch as most know of Princess Diana’s struggle to stay afloat in her unsurmountable circumstances; the riveting performance by Kristen Stewart is the reason to view. The documentary film “The Rescue” is National Geographic’s harrowing story of the rescue of 12 boys trapped in a flooded cave in Thailand. Ridley Scott’s “Dune” is the epic science-fiction novel-based story set against impressive production design that creates new worlds similar to “Star Wars.” 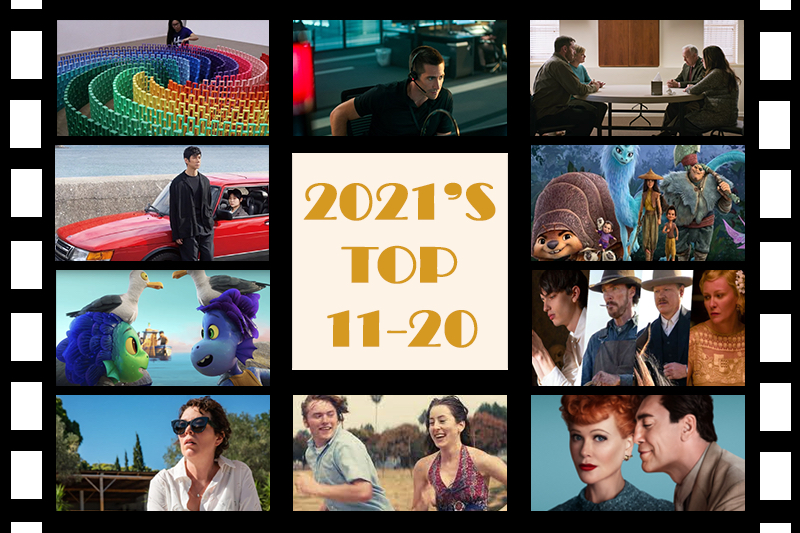 15. Raya and the Lost Dragon

Looking at the 11-20 best film section, I appreciated Aaron Sorkin’s enlightening view of Lucille Ball’s comedic writing. Jane Campion’s “The Power of the Dog” is another tough film to view. However, the performances of Benedict Cumberbatch and Kodi Smit-McPhee are award-worthy, and the cinematography is stunning. Lastly, writers Sean Baker and Chris Bergoch’s film “Red Rocket” is a character study of a scammer of the worst kind, one that plays with your emotions; the performance by Simon Rex is note-worthy as is newcomer Suzanna Son as Strawberry.

Yes, it’s been a challenging year for movie viewing with the Covid pandemic; I have been viewing films in theaters, which is my preferred way to experience a movie, although I continue to wear a mask inside the theater. In Cannes, France, movie-goers had to show proof of vaccination and proof of a negative Covid test every 48 hours during the festival. I’m thankful for my Cannes experience this year, as it is definitely a highlight in my career as an entertainment journalist.