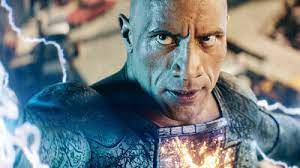 Yes, “Black Adam,” Dwayne Johnson has been freed from his tomb for almost 5,000 years and is ready to seek justice for his people of Kahndaq with his colossal powers. “Black Adam” sets up the realm of the “DC Extended Universe” with a surprise during the middle of the ending credits. I enjoyed the illustrious special effects and the non-stop action. The film is playing in theaters now and is not for children due to its violence.

Directed by “Jungle Cruise” and “Orphan” filmmaker Jaume Collet-Serra, Johnson plays Teth-Adam, a former slave who was granted the powers of Egyptian gods to protect humanity. Although his homeland of Kahndaq is destroyed after he seeks vengeance for his murdered family. He’s awakened by an archaeologist searching for a powerful relic to free Kahndaq from a vicious mercenary network. Teth-Adam’s explosive resurrection and the mercenaries’ slaughter soon puts him on the watch list of the Justice Society of America, (JSA) a team of superheroes who maintain international peace—their task is to decide whether Teth-Adam is a potential enemy or ally to the world.

Aldis Hodge (“Straight Outta Compton,” “One Night in Miami”) costars as JSA leader Carter Hall (aka Hawkman), along with Pierce Brosnan (“Mama Mia”) as the superhero sorcerer Kent Nelson (aka Doctor Fate), Quintessa Swindell (“Voyagers”) as wind-swirling hero Maxine Hunkel (aka Cyclone), and Noah Centineo (“To All The Boys I’ve Loved Before”) as supersize-changing, hero Al Rothstein (aka Atom Smasher).

Other key characters include Sarah Shahi (“Sex/Life”) portrays the archaeologist who awakens Teth-Adam, Bodhi Sabongui (“The Baby-Sitters Club”) plays her son; and comedian and actor Mohammed Amer (Mo) plays her brother. Marwan Kenzari (“Aladdin”) plays the Intergang member on the hunt for a powerful relic known as the Crown of Sabbac.

The tone of “Black Adam” is of comical superhero shenanigans, although it’s also dark and gritty, with CG-fueled, combative action at its core. Johnson’s Teth-Adam reminds us that’s he, not a hero. Johnson is one of the most adept combat actors in Hollywood these days. Therefore it’s fitting he has his own movie, although his tireless efforts to project himself as a family guy, a dad, etc., conflicts with the violence of his character. Again, the film is not for kids.