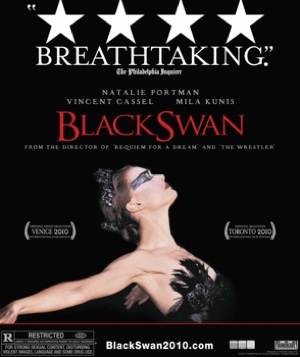 Perfectionism − Should be Considered a Character Flaw

“Black Swan” stars Natalie Portman in her most riveting role to date. She carries the film to great lengths and in most instances precedes the call of duty. What’s surprising is the quality of the film as a whole. It’s a character study of the esoteric world of ballet, but captures one’s attention as an unparalleled tour de force in filmmaking. Director, Darren Aronofsky, noted for Mickey Rouke’s reemergence into the spotlight, most notably for his Academy Award nod for “The Wrestler” now presents us with another ‘inside view’ into an additional competitive physical arena or stage, so to speak. “The Wrestler,” as a film, per say, bordered the ‘B’ movie category but Swan on the other hand, soars as a magnificent cinematic spectacle. Portman, (“V for Vendetta” 2006) plays a troubled, overachieving perfectionist, who’s fire is fueled by her domineering mother, Barbara Hershey (“Beaches” 1988) and her twisted ballet coach, French actor, Vincent Cassel. Throw in an at-your-heels rival, Mila Kunis (“Forgetting Sarah Marshall” 2008) and you’ve got a psychological thriller, that at times crosses over into the horror genre. Be warned, as this is not the type of film where you can drift off and come back when you please. You’ll be hard pressed to take your eyes away from the film even for a second as the editing is so superb, you won’t want to miss a frame. The film draws you in from the beginning as we are introduced to Portman (Nina) a twenty something living with her doting, retired ballerina mother in a tiny apartment in New York City. Good luck trying to have any privacy or expressing any kind of individuality in these cramped quarters. To make matters worse, mom seems all too pleased with the situation.

Nina, a member of the New York City ballet is at the top of her game and is slated to replace prima ballerina, Beth (Winona Ryder). A prime role with a dual persona is also waiting in the wings for her. Yes, the White Swan is the near perfect role for Nina and within her reach; however she’ll have to make some major personal adjustments to play the contrasting role of the Black Swan.

After Beth’s retirement party it’s announced that Nina will play the arduous lead role of the White/Black Swan. Nina is ‘over-the-moon’ when the announcement is made and quickly calls mom − this is the last tender moment between mother and daughter. Nina is warned by her hard-nosed, bully of a ballet teacher that she, may in fact, not be able to pull off the role of the Black Swan, as recklessness and sensuality traits do not seem to fit Nina’s personality. Her apparent innocence and decorum sway her more towards the White Swan.
When a newcomer to the ballet company Lily, played by Kunis, appears, a rivalry for the role ensues that threatens not only Nina’s role but also her very existence. In the hands of director Aronofsky, the film has twists and turns that fade in and out of reality. Often, we aren’t really sure what is real and what is in Nina’s psychotic mind. Pay close attention to the use of mirrors and the hand-held camera. Both elements give the film energy and realism. Brilliantly acted and directed, the film is accompanied by an amazing musical score by Clint Mansell, which of course is heavy on Tchaikovsky. Bottom-line: A visually beautiful, horrifying and sad film – although not everyone’s cup of tea. As for this critic, it was near perfect in terms of artistic value. On a side note: Director Darren Aronofsky touches on his film “The Wrestler” in the quote below that was included in the Fox Searchlight Pictures press notes and may be of interest: “Some people call wrestling the lowest of art forms, and some call ballet the highest of art forms, yet there is something elementally the same. Mickey Rourke as a wrestler was going through something very similar to Natalie Portman as a ballerina,” Aronofsky explains. “They’re both artists who use their bodies to express themselves and they’re both threatened by physical injury, because their bodies are the only tool they have for expression. What was interesting for me was to find these two connected stories in what might appear to be unconnected worlds.” Sarah Adamson © December 3, 2010