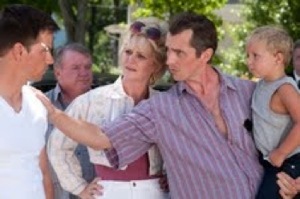 The Real Battle is Outside the Boxing Ring

At times, “The Fighter” feels like a very special, extended, behind the scenes episode of the Jerry Springer show. Please don’t let that comment scare you away from this movie, because in this case, it is not a bad thing. Based on a true story, “The Fighter” has such raw honesty that it sometimes feels like an actual documentary as opposed to a Hollywood movie.

Academy Award nominee Mark Wahlberg (“The Departed” 2006) gives a fine, understated performance as “Irish” Micky Ward, a boxer living in the shadow of his washed up, drug addicted, half brother Dicky Eklund, played by Christian Bale (“The Dark Knight” 2008). Dicky was the first family fighter, having claimed fame by once “knocking down” Sugar Ray Leonard, earning him the title “the Pride of Lowell,” the blue-collar town in Massachusetts that is home to the Eklund/Ward clan. As the movie begins, it is 1993 and Dicky has just begun filming a documentary with HBO. He tells people that it is about his “comeback,” but in reality, it is about crack addiction. The opening scene of “The Fighter” shows Dicky on a sofa, talking to the camera, and from that moment, it is clear, Bale will receive many award nominations for this role. The real Micky Ward was quoted in Paramount’s production notes as saying, “I think he plays a better Dicky than Dicky.”

Dicky is Micky’s trainer, along with Mickey O’Keefe (who plays himself in the movie), while their mother, Alice, serves as Micky’s manager. Unfortunately for Micky, Dicky and Alice are both caught up in Dicky’s “glory days,” and the dream of his comeback, which means that what’s best for Micky plays second fiddle to Dicky. Melissa Leo, Oscar nominee for her role in “Frozen River (2008), plays Alice. As with Bale, Leo gives a remarkable performance as the hard-nosed, controlling mother of nine, who, having a soft spot for “her Dicky,” chooses to turn a blind eye to his drug addiction.

When Micky’s new girlfriend enters the picture, the real trouble begins. With another outstanding performance, two-time Oscar nominee Amy Adams (“Junebug” 2005, and “Doubt” 2008) took on a far different role for herself as Charlene, the foul mouthed, gritty bartender who persuades Micky to break free from the control of his family. She sees it as being in his best interest, but doesn’t seem to realize the battle that will ensue. The conflicts between Charlene and Alice, along with Micky’s seven sisters, rival the boxing scenes as the most intense in the film.

As everyone around him fights for control, Micky continues to train, winning fights while quietly struggling with the break from his family, mostly to that of Dicky, who he says, “…taught me everything I know.” Even though Dicky has his issues, it is evident, Micky means the world to him, and they have a very close relationship. Try as he might, Micky has trouble breaking the emotional ties.

Director David O. Russell’s (“Three Kings” 1999) decision to use several local, non-seasoned actors in smaller roles helps to elevate the film to another level, especially in conjunction with first-rate performances by professional actors. The strongest aspect of the film is most definitely the acting, especially the performances by Bale and Leo.

For boxing fans, yes, there are plenty of wonderful boxing scenes in the movie, and for those not so interested in boxing, the movie is filled with so much more. It is full of family drama and emotional turmoil, with a touch of a love story. Oh, and did I mention the family drama?