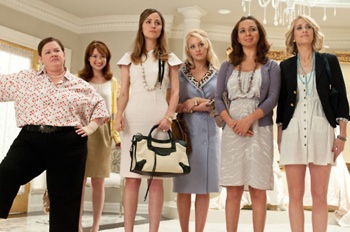 The Cast of “Bridesmaids,” Melissa McCarthy, Ellie Kemper, Rose Byrne, Wendi McLendon-Covey, Maya Rudolph & Kristen Wiig Photo Courtesy of Universal Studios
Bring Your Tissues…For Tears of Laughter I must admit this review is difficult for me to write because I honestly don’t even know where to begin. This film makes you want to send a mass text message out to all of your friends, raving about the movie you just saw…not after the movie but before you even exit the theatre. After screening this film, I immediately wanted to watch it all over again. I cannot remember the last time I’ve felt this way. I even tried to find out when the DVD would be released. As I gather my notes to write this review, I cannot stop laughing to myself. This is the kind of film you will find yourself continually quoting. I could go on for days raving about this film. In fact, Universal should probably hire me as a promoter at this point. From producer Judd Apatow (“Knocked Up,” 2007 and “Superbad,” 2007) “Bridesmaids” certainly proves that women can be funny, too – actually, hilarious. Annie, played by Kristen Wiig (best known for her work on “Saturday Night Live”) finds out that her longtime best friend, Lillian, (Maya Rudolph, “Saturday Night Live”) is engaged and wants her to be her maid of honor. Well, Annie is certainly “honored” but we see how she really feels when we watch her begin to chug a bottle of wine. We now commence the journey of Anne’s life unraveling while Lillian’s is just beginning… Soon after at the engagement party, Annie finally meets the women she will be walking with down the aisle – Megan (Melissa McCarthy, “Mike & Molly” 2010-11), Rita (Wendi McLendon-Covey “Rules of Engagement” 2010-11), Becca (Ellie Kemper “The Office” 2009-2011) and Helen (Rose Byrne, “Insidious” 2010). This mix of women is not a group you would typically see hanging out together. This unique dynamic makes each scenario even more entertaining. Megan is Lillian’s blunt, future sister-in-law who loves fight clubs, puppies and simply not giving a damn what other people think of her. Lillian’s cousin, Rita, is a sarcastic mother who enjoys tanned, fire-eating, sarong-wearing gentlemen. Becca is Lillian’s innocent, girly girl, co-worker who continually reminds Annie how awful it is being single. Last, but certainly not least, is Helen, the wealthy, uptight, condescending friend who thinks she is Lillian’s best and only friend. From the engagement party, to the dress fitting, to the airplane ride to Vegas – the scenes just keep getting better. Once they arrive at the bridal store, the girls suddenly find out that the meal from the hole in the wall restaurant Annie recommended isn’t sitting so well. This series of scenes during the dress fitting sent the audience howling the entire time. Annie’s fear of flying and raging anger toward Helen concocts one interesting plane ride. The random woman seated next to Annie adds to the chaos when she tells her, “I had a dream last night…that we went down. You were in it.” This sends Annie reaching for her drink that is mixed with the pills Helen gave her to “calm her down.” This film is cynical, sharp and honest. I laughed (and openly admit – sometimes cackled) so hard I couldn’t breathe. This film is not just hilarious, however – there are some great messages throughout. Annie continually pushes those who care for her away. Her pride takes over and it is almost as if she thinks she doesn’t deserve to be loved. She’s constantly putting others before herself and slowly hitting rock bottom. At one point, when just about everyone else has walked out on Annie due to her antics, Megan shows us her more serious, sensitive side when she tells her, “You’re your own problem and you’re also your solution.” Instead of feeling sorry for herself, Annie soon realizes she does deserve happiness and tries to earn back the respect of those she hurt. The chemistry between each and every one of these characters is pure genious. Wiig and Rudolph could very well make you believe they’ve actually been friends since they were kids. A certain musical group makes a cameo in this film but I won’t ruin the surprise. Let’s just say if you grew up in the 80s or 90s you will find yourself singing along as if you were a little girl again standing on your bed, singing with your hairbrush. Wiig, who co-wrote the script, hits the nail on the head with her jokes and common thoughts of bridesmaids, let alone girlfriends. This movie may seem like a chick flick but it’s not. Men will be easily entertained by the antics they witness. I think women and men of all adult ages will enjoy this comedy. If I had one complaint: I’m upset that some of the scenes you see in the previews don’t make the final cut in the movie. I wonder why? All of them are actually pretty humorous. Bottom Line? Are preorders available yet for the DVD? I am continually watching the trailers to hold me over until “Bridesmaids” is released. Do you need more convincing? Jessica Aymond © May 13, 2011