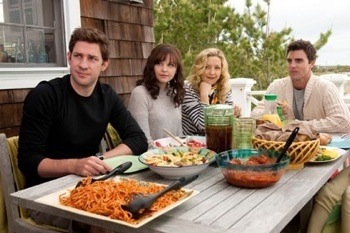 John Krasinski, Ginnifer Goodwin, Kate Hudson and Colin Egglesfield in “Something Borrowed”
Something Worth Seeing Based on Emily Giffin’s book by the same name, “Something Borrowed” was co-produced by Hilary Swank. This incredibly popular novel was an obvious choice for an adapted screenplay. Rachel White (Ginnifer Goodwin “He’s Just Not That Into You” 2009), an attorney in New York City, begins to question her life path as she turns the big 3-0. Most importantly, will Rachel ever find the right man to settle down with? Her best friend, Darcy (Kate Hudson “Nine” 2009) is about to marry the very same guy Rachel had a crush on in law school, Dex (Colin Egglesfield “Melrose Place” 2009-2010). Will Rachel’s longing for Dex get in the way of being Darcy’s maid of honor? Coincidently, Dex also had a crush on Rachel in law school but that would never cross Rachel’s mind. She wouldn’t believe that an attractive, charming man like Dex would have any interest in a plain Jane girl like herself. “Ironically,” one night during law school Dex takes Rachel out for a casual drink to celebrate the test they had just taken and Darcy shows up. The outgoing, attention stealing and often times overbearing Darcy decides to hit on Dex the moment she sits down. Although Dex has his eyes on Rachel, he senses that she isn’t reciprocating the feeling. Darcy makes comments to Dex insinuating Rachel’s liking for him, but Rachel shoots them down every chance she can get so she doesn’t look like “the crazy girl.” Understandably, Darcy fully takes advantage of this opportunity and begins dating Dex. The rest is history. After the couple’s engagement party, Dex has to go back to the bar to retrieve Darcy’s coveted Chanel purse that she left underneath a table. Rachel is one of the last people to leave the bar so she and Dex decide to grab a drink. After a few hours of drunk, flirty conversation and Rachel flat out revealing to Dex that he was her crush back in the day, they realize they both have feelings for each other. One thing leads to another and no surprise, the next scene shows Rachel waking up next to Dex. Obviously, this recipe for disaster becomes the core ingredient of the film. Dex and Darcy’s wedding date is rapidly approaching and Darcy wants to make the most of her time with friends before she ties the knot, so she gathers the crew for a few trips to the Hamptons. This allows for plenty of hang out time between Rachel and Dex who provide their share of awkward moments in front of others. Luckily, Rachel’s best guy friend, Ethan (John Krasinski “It’s Complicated” 2009) can always be counted on to provide the comic relief. In fact, Krasinski’s witty one-liners often times steal the scene. It would be safe to say he single handedly puts the “com” in this “rom-com.” I found myself laughing out loud nearly every time he opened his mouth. In one comical scene while in the Hamptons, he is lying in a little girl’s bed surrounded by anything and everything girly. He wakes up to Claire (Ashley Williams “Saving Grace” 2009-2010), his worst nightmare. She is standing at his bedroom door wanting to cuddle and he tries to convince her he is gay just so she will stop pursuing him. Another hilarious scene is when Rachel tries to make Dex jealous while dancing to Bubba Sparxx’s “Ms. New Booty” and completely makes a fool out of herself. All four main characters are incredibly likeable and mesh well together. In fact, these characters are very much how I pictured them while reading the book. Krasinski’s Ethan is much the same as his “Jim” character in, “The Office.” Hudson plays the classic out-going, attention-seeking character while Ginnifer Goodwin plays her familiar “plain girl” role in this movie. Goodwin’s hair is somewhat distracting in some scenes – her bangs especially. Some of Egglesfield’s shirtless or shirt open scenes could have been kept to a minimum as well. He certainly has nothing to hide under all those button-downs, but it almost got too distracting and felt somewhat out of place at times (yes, it’s possible). Egglesfield actually attended the Chicago screening for this film and the Q & A session post show. He was incredibly excited and humbled by all those who came out to support him. His entire family, extended family and friends all came to the screening. His old drama teacher and obstetrician who delivered him even came out to support him. When asked the popular question, “Are you single?” he replied, “It’s complicated.” Girls, if you are interested here are some tips – he said he typically likes women who are a mix between Rachel’s and Darcy’s characters, intelligent and sophisticated yet also outgoing and the life of the party. When I asked him to recall a funny moment on set he described the scene where Ethan pretends to be gay and goes up to his fellow cast mate, Steve Howey, kisses his cheek and caresses his chest. He said they probably had to dub out all of their laughing in the background. They did take after take because Krasinski kept taking it a little too far. This hilarious scene played well on screen. Bottom Line? “Something Borrowed” is certainly a chick flick but if you are a guy who is “dragged” to this film, I’m sure you will appreciate Krasinski’s sharp and clever humor throughout. Predictable yet entertaining. Jessica Aymond © May 6, 2011