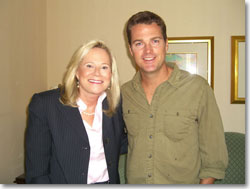 Chris was on a press junket for the movie Kit Kittredge: An American Girl. Chris portrays Kit’s father, Mr. Kittredge in the film. Chris discusses his family of 5 children, life in LA, being a dad, and reflects on his own childhood. Chris O’Donnell movies: Scent of a Woman (1992) Batman Forever (1995) Batman & Robin (1997) The Bachelor (1999).

Chris O’Donnell’s eyes are as blue as Paul Newman’s. He’s incredibly good-looking, sincere, funny, relaxed and all around great guy. His discussions about family were from the heart. He struggles with parenting issues as most of us do and he’s come to terms with the career balancing act. He wore hip jeans with holes in the pant legs that were most likely purchased at an funky LA boutique. Really cool guy to meet.

Question: How does the guy that played Robin switch gears and portray a dad?

Chris O.: The guy that played Robin in Batman now has five kids under 8 so it was a natural evolution it feels very natural for me.

Question: As a Chicago guy, are you living here now or are you in LA?

Chris O.: We’re in LA. It’s such a tease to come back. I love it here and I get so sentimental when I come back and I brought my oldest daughter on this trip so she’s up with my sister in Winnetka. It’s tough to come back home again, it would be so different I mean you’d think you’d just slide back in with your same friends and you’ll always be friends with your old friends, but its never the same. The city sure looks good.

Question: How do you keep give your kids the Chicago-Midwest values in LA?

Chris O.: It’s tough, it really is, and it’s really flashy out there. My daughter asked me we were driving from the airport how much further to your sister’s house. I’m trying to explain in comparison to LA that we were about five miles away ,and that in fact, I used to ride my bike this far. My daughter said, “You got to ride your bike that far from home!” It’s a little bit different here, there’s grass, sidewalks, and it’s safe. 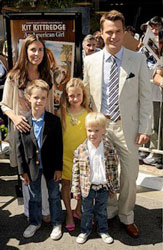 Question: How do your girls how do they feel about the movie?

Chris O.: Lilly (8) is so excited. I brought her to Toronto when we were filming and she got to be on the set and meet Abigail. She brought her doll and she has the new Ruthie AG doll and its fun .This is her 3rd time seeing the movie because we did a little screening for her school the week before the premiere and then we did the premiere in LA. So now she’s bringing her cousins today and tomorrow she’s going to New York with me and will bring her other cousins from New York there. So she’ll be like an old pro. She did the pictures last time so tonight she said she wants to walk the red carpet.

Question: How did she feel about you being Abigail’s dad?

Chris O.: We never talked about it. I mean, Abigail’s mom tells funny stories about Lilly being on the set. Lilly was sitting in the chair and they were working on some scene and Lilly goes “No, they can’t do that scene its been done before.” She has fun with it, she’s a good kid, you can leave her on the set and she’ll be totally quiet.

Question: How do you feel about your children becoming actors if there’s an inclination there, do you support that?

Chris O.: Yeah, its fine I think its natural for a kid to be interested in what their parents do. I mean I look at my family and majority of the kids followed my dad’s footsteps in advertising and radio. But I mean if she has a talent for it and she’s serious about it that’s fine. I don’t think it will last, I think its just right now, something fun to do.

Question: Could you give an example of something from your personal life that helped you play the role of Mr. Kittredge.

Chris O.: Well, I mean every time I go on location it’s brutal to have to leave my family for long periods of time. I mean last year I spent 2 or 3 months in Budapest. Other than Apple iChat, it was tough not being around them. I think it’s a big part of the film, there’s an emotional core in my character, having to leave to find work in Chicago and I could absolutely relate with that.

Question: If you were in the same situation, as your character, and you were jobless, what would you do in real life?

Chris O.: Probably what he did. He was doing everything he can. I think it was interesting to see how he was trying to protect his kids from the reality that was going on. My parents did the same thing. You find out years later thinking why didn’t anyone tell me that. I was always being shielded but there’s a certain fine point, where you have to let them know what’s going on. His character is forced because Kit sees him in the soup kitchen, he’s lost his dealership, his car and he’s forced to have this talk with her to tell her some of the realities of what is going on.

Question: How do you prepare for this role?

Chris O.: Same as any role. Honestly, I felt a really strong connection it’s the first time I’ve played a parent and anyone that has kids will tell you it’s just a different level of love that you have for your children. I mean you love your parents, your brothers and sisters, your wife, but your children are a different thing. I mean you literally would throw yourself in front of a moving train to save your kids. I think that you can still play a parent in a movie without being one but there is just something that is just so real and so easy to tap into. I felt a lot of connections to this movie on many different levels. My mom was born in Cincinnati; my dad was a kid at this same time. My dad would have been 12 years old during this movie. And I kept looking at these kids running around and I kept thinking I can’t believe these are the cars that my dad grew up with and so I really felt a connection to the film.

Question: Tell us about your life when you’re not working.

Chris O.: I carpool and drive the kids around.. I drive the kids every morning to school and they take the bus home. I get in front of the computer and read scripts I take care of the meetings I have to try and get things done because if I’m not on the set, I’m really involved in their Little League, basketball and soccer. If I’m going to play golf, which I love to do, I try to go while the kids are at school so that I never play on the weekends unless I’m going away for a weekend or something.

I lead a pretty normal life, its unusual in the fact that I’ll be working out and see my wife’s friends at the gym because all my buddies are at the office working. I’m so used to going to the workout classes when it’s just me and maybe like one other guy and 20 women. I really don’t like it when I go there on the weekends and there’s more than a couple guys there I mean women smell much nicer, I don’t like all the dudes in here, you’re cramping my style.

Question: Since you have daughters what do you think this movie will teach young women, girls?

Chris O.: I think it’s a great movie for young women, I think it teaches them so much. It’s interesting just to see at this time period that the women had to pick up the slack, especially in the Kittredge household, dad took off and Mrs. Kittredge was suddenly running a boarding house and managing the money, she’s doing everything,. Kit learns about this problem and she doesn’t sit back and cry she’s proactive. She tries to write and make money. She’s also true to character because she doesn’t rush to judgment on the hobos. It’s easy to take the side of the powerful class and say yeah they’re trouble get them out of here and she gives everyone a fair chance. She’s a great role model.

Question: Did you ever have a tough time in your personal life, and did your faith help you through that?

Chris O.: I’m still a practicing Catholic; I go to church all the time and take my kids. I think it’s important to raise your kid in some kind of tradition not necessarily Catholic. I think it’s a good foundation and structured way to raise your children. Its funny you see people embrace their religion again when tragedy strikes and that sort of thing. I’ve been pretty consistent my whole life with it. I’m not some raging religious guy but I like to go to church just to sit there and think. I may not even be paying attention to what they’re talking about but in my own mind I know my kids are learning a lot and it’s just a good framework.