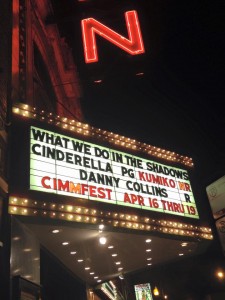 The 2015 edition of the Chicago International Movies & Music Festival (CIMMfest), which ran April 16 – 19, wrapped up this past Sunday and was an interesting mix of slick productions with sweeping shots and hard hitting beats, as well as kitschy indie films with a do-it-yourself aesthetic.

Shake the Dust, the global breakdance documentary produced by Nas, played on Thursday night at The Logan Theatre and got a late start, which nixed my chance to stop by the opening reception. The screening, however, was a party all its own. A film like this doesn’t come along often, but when it does it will leave a remarkable impression on you.

Shake the Dust explores and elevates the art of breaking (most commonly known as breakdancing) and demonstrates its connective, unifying power around the world, but more importantly its ability to mobilize communities. The film takes you inside war-torn territories, favelas and slums to shine a light on how breaking creates structure, discipline, purpose and positivity for those in places and situations where it can be hard to feel hopeful. The young people the film chose to focus on made it particularly impactful.

The culture of breaking is uniquely supportive of all involved, and you don’t need money or equipment to do it. It transcends language, class, socioeconomic status, gender, and age. The film, perhaps without intending to, dispels notions that millennials are selfish and too plugged in to realize what’s going on around them. On the contrary, and as someone who works with youth, I came away from this film more hopeful than ever about the future of cultural exchange, community building and the environmental conscience of those whose footprints have yet to be made. It’s an incredible film with an even better soundtrack, and should be seen in schools and libraries across the world.

I also saw 808 and had a chance to chat with producer Alex Noyer at the Soho House on Saturday. 808 is a multi-sensory deep dive into the world of the iconic drum machine made by Roland in the 1980’s that changed the sound of music forever. It wasn’t at all what I expected but in the best way possible.

My misconception of the 808 being primarily based in hip hop was schooled within the opening sequence, which makes quick work of establishing electronic music from Europe, such as Kraftwerk, as the inspiration and root of the synthesized drum sound. The film’s expansive landscape of genres and interviews is a testament to the 808 being as relevant and full of possibilities today as it was over 25 years ago. Alex Noyer noted that some of the musicians they interviewed were as star-struck talking about the 808 as Noyer was meeting them. Listen to our conversation below:

On how the film came about and how long it took from ideation to production:

How did the film change and evolve during the process?

The 808 as an invitation to explore:

Moments on the cutting room floor:

On where music and creative innovation are going:

Reactions to the film and what’s next for the 808 experience:

Sarah Goodman’s Porch Stories was a charming independent project but didn’t quite come together for me. While it was well produced and a nice change to see something shot in black and white, the story premise could have taken a more unique angle instead of the often explored scenario of a bride-to-be unexpectedly running into an old flame and a moral dilemma ensues. Additionally, with the title being Porch Stories, not much of the embedded narratives or staging happened on porches. A few of the younger actors showed promise while others had several uneasy and awkward moments. Perhaps with a bit more production time to marinade and some different casting choices, this could have fulfilled its potential.

The Poet of Havana, directed by Ron Chapman, was a rare glimpse into Cuban life as reflected by the music of internationally renowned Cuban musician Carlos Varela. His lyrics and perspective speak the truth about what day to day life is really like for Cubans, even though vocalizing the struggle is taboo. For most of his career Varela’s music could not be played on the radio or in concerts but he and his music found a place in the hearts of those who so badly wanted the truth and needed hope. 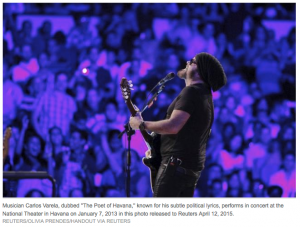 Over time, his music and message began to open doors and start conversations about Cuba’s position in the global economy.  Varela recently received the title of Honorary Doctor of Laws from Queen’s University in Canada for his work as a social critic and ambassador for Cuba. The film was a unique portrait of a world we don’t often see and was filled with Varela’s pensive and uplifting music as well as a host of incredibly talented guest musicians.