I interviewed Dave Franco on May 31, 2013 at the Peninsula Hotel in Chicago on behalf of his new film, “Now You See Me.” He talked about his role in the film, actors he admires, working with his brother in the future and his love of stunt work.

Upon meeting him I was struck by the strong resemblance to his older brother James Franco, but noticed a striking difference in that his voice is much deeper. We chatted for a bit before the interview as I have a friend who knows his mother (one of those six degrees of separation circumstances). He was great to meet, both charming and personable.

Sarah Knight Adamson: I’m speaking with Dave Franco about his new film “Now You See Me” thank you so much for chatting with me and welcome to Hollywood 360 Network Radio. I have to tell you that I really enjoyed your film and your role!

Dave Franco: Thank you and thanks for having me!

SKA: Could you please explain to our listeners how your character fits into the Four Horsemen, which is comprised of Woody Harrelson, Jesse Eisenberg, Isla Fischer and yourself?

DF: I play this guy called Jack Wilder who starts out as a street magician and pickpocket who finds his way into this group that you just mentioned. It’s kind of art imitating life in the sense that when I showed up on set the first week I was surrounded by all of these actors that I’ve known and admired for so long and they had no idea who I was. So I put everything I could into this role to do a good job and prove to them and myself that I belonged.

SKA: Did you learn anything from them in particular about acting during filming?

DF: One of the biggest take aways for me being around all these incredible actors is that I noticed how they all still doubt themselves in a very endearing way. They’ve all proven themselves as incredible actors and if they wanted, they could just coast and they could just phoned it in for the rest of their careers but they really do care and they want to try and give the best performance possible and it was really inspiring.

SKA: Were there any comical moments on the set that you can talk about? I would think with Woody and Isla they might be causing some laughs.

DF: Yes, most of my scenes were with them and being around them I saw that they are just naturally funny, we’d shoot 16 to 18 hour days. Woody would work on his mentalist role by playing silly games with us, like guess which finger I’m thinking of. We’d play that for hours, it was crazy.

SKA: The movie is layered with heist situations that are accomplished by magic, why do you think magic is so appealing to people?

DF: I think people are drawn to the mystery of it all. People want to suspend their belief in something that seems impossible. With this movie and when you combine the heist element in it, it kind of feels like you’re combining the films “Ocean 11” and “The Prestige.” It’s a lot of fun and the twists and turns actually culminate to a very satisfying ending.

SKA: At times the movie reminded me of the “Ocean 11” your film has the added twist of the Robin Hood effect. Can you explain this to our listeners and perhaps the reasoning behind it?

DF: The four magicians are technically committing crimes; we are stealing money from very wealthy people and giving that money back to people in need. It’s an interesting thing because I can imagine that the audience will be confused about whom to root for either the cops who are trying to stop us or us. I would guess that the audience is going to shift back and forth because, again−we’re not doing the most morally sounding things in the world but our hearts are in the right place. 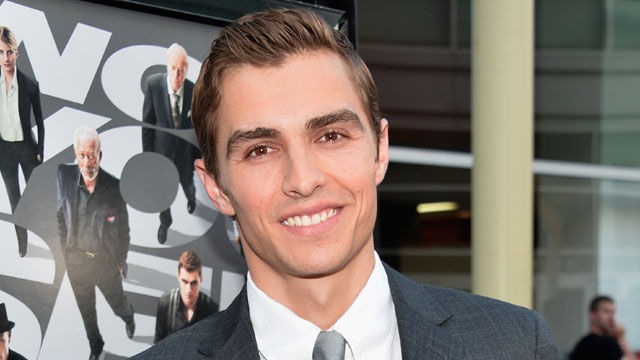 SKA: There’s an interesting scene in New York where you’re being chased by Mark Ruffalo and this looked challenging to film. Could you tell us a little bit about that?

DF: That scene was one of the toughest, but one of the most enjoyable scenes to film. I played sports my whole life so to be able to use those skills in acting was a lot of fun for me. It was a blast!

SKA: Here’s a question from one of your fans, she’s a senior in high school and wants to study film in college: “Do you and your brother James plan on collaborating on anything together in the future?”

DF: That’s a good question! Yes, definitely down the line but to be honest in the past couple of years I’ve made a decision to distance myself from him work wise. I love him to death and I respect him so much but in terms of the work I’ve been trying to pave my own path and show everyone that I am my own person. With that being said, if somewhere down the line I do earn my own credibility, I would love to collaborate with him because we do have similar sensibilities and he’s directing a lot of his own projects now. On that level I’d love to work with him too.

SKA: Who are some of the actors that you admire?

The actors that I look up to are probably the ones that most people admire Sean Penn, Phillip Seymour Hoffman, Joaquin Phoenix and Daniel Day Lewis. When I look at this list those aren’t necessarily actors I imagine myself to be in the near future because first off, they are untouchable. What I respect about those guys is that they really are chameleon’s in a sense because they can completely transform themselves from one role to the next. There’s not a lot of guys out there who can really make you believe they are different people each time out.

SKA: Do you have any upcoming projects you’d like to talk about?

Yes, I just finished a new movie a couple of days ago, it’s a big comedy called “Townies” and Nick Stoller directs it. Seth Rogen’s involved, Zac Efron, Rose Bryne and again, I’m surrounded by really talented people. This one is really wild, it’s very raunchy, as you would expect but really intelligent. With Seth Rogen being involved it was all improvised, which is a ton of fun but mentally exhausting too, when you are improvising every day for months. Don’t get me wrong, I love that style of filmmaking and I would work with those guys again in a second if they would have me.

SKA: What is something your fans might not know about you?

DF: I’m kind of a hermit, I have an incredible group of friends and an incredible family and I just feel content staying in with them and hanging. If I do go out, it’s to dinner. I don’t go out to bars or clubs I keep a fairly low profile.

SKA: Is there anything else you’d like to say about “Now You See Me?”

DF: It’s one of these movies where you’re just going to walk away thinking that was really fun. You’re going to have a really great time watching these incredible actors outside of myself, you’re also going to be guessing the whole time because of the twists and turns and when audiences find out the ‘big reveal’ I know they will be very satisfied with the ending.

SKA: Thanks you much for speaking with me!

DF: Of course, of course thank you so much!