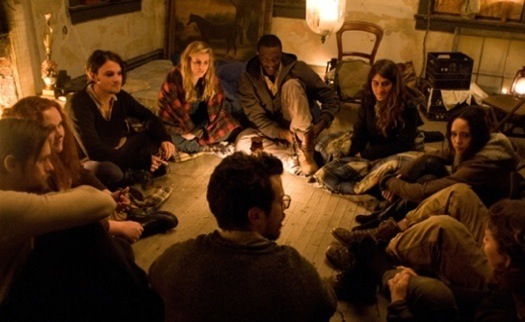 A leading private intelligence firm assigns a young operative and ex-FBI agent, Sarah Moss, to investigate a secret anarchist group, The East. These idealists are plotting attacks against major corporations, like the company Sarah works for, in the hopes to expose misconduct. They make their stance crystal clear from the start, “We want all those who are guilty to experience the same terror of their crimes…It shouldn’t be so easy to get away with murder. We are The East and this is just the beginning.”

“The East” is a gripping mystery-thriller written by writer-director Zal Batmanglij and actor-producer Brit Marling who also collaborated on the Sundance hit, “Sound of My Voice” (2011). The emotionally risky political drama has a unique script that forces audiences to contemplate which stances and methods they support.

The clever well-paced film is filled with exceptional performances by Brit Marling (“Arbitrage” 2012), Alexander Skarsgard (“What Maisie Knew” 2012), Ellen Page (“To Rome With Love” 2012) and Toby Kebbell (“Wrath of the Titans” 2012) among others.

It is entertaining, intelligent, timely and socially conscious. While the film may not involve big stunts or high speed chases, the suspense is drawn from the unknown, unexpected and unordinary coupled with an eerie musical score and a strong cast ensemble. The fact that Sarah, the female protagonist, cannot be honest with anyone, even her boyfriend, adds to the audience speculation and uneasiness of the situation.

Sarah (Marling), goes undercover – transforming into a rugged look with dyed hair, a hoodie and backpack filled with small supplies that could help her in an emergency. She essentially travels off the grid into an unknown forest where she is approached by The East’s crusaders.

Although still treading lightly with The East, Sarah discovers more about the plots for their “jams” better known as stealth attacks. The film actually opens with disturbing shots of an oil company CEO’s vacation home flooded with crude oil, thanks to The East. While undercover, Sarah endures several bizarre almost initiation-like tests such as having to wear a straitjacket to dinner while the entire crew watches her struggle to eat her soup with a long wooden spoon without using her hands. This may sound silly but this scene was incredibly creepy, among others.

As Sarah learns more about The East’s leaders Benji (Skarsgard) and Izzy (Page) along with their devoted crew Doc (Kebbell) and Luca (Shiloh Fernandez, “Red Riding Hood” 2011) audiences begin to see the commitment to her assignment waver. The more time she spends in The East’s ‘world’ the more she begins to adopt their perspectives. In turn, this challenges the audiences’ consciousness. Is there a ‘good’ or ‘bad’ team?

Marling is simultaneously calm and intense as in many of the roles she plays. This conflicting combination keeps audiences on the edge of their seats. Skarsgard is the reserved, mysterious and emotionally strained Benji who channels a little bit of Charles Manson with a mountain man twist. Page’s performance as a serious, guarded and single-minded leader is a much different role than audiences are used to seeing as most associate her to the aloof, self-deprecating character we all know in “Juno.”

Marling and Batmanglij participated in the Q&A session post screening in Chicago. Both seemed very passionate about their work and excited to share it with the audience. Batmanglij said that the intensity of the script was a great litmus test to determine who really wanted to be there and that there were no egos with this cast. It was fascinating to hear about the amount of meticulous research that went into this film and that the well-known BP oil spill occurred shortly after production began. I chatted with Marling after the Q&A session who was incredibly humble and down to earth. She is a bubbly contrast to many of the characters she plays. Marling said she truly appreciated everyone who attended and hoped audiences appreciated the film just as much – and that I can affirm.

Bottom Line? Audiences will be tangled up in the eerie suspense of this controversial thriller and may find themselves struggling to locate their conscience along with Sarah. Impressive performances by Marling, Page and Skarsgard and the unique script make this film worth seeing.