Skip to content
Dennis Farnia was in Chicago promoting his film “The Last Rites of Joe May” we met in Chicago at Tribeca Flashpoint Media Arts Academy and chatted about his Chicago roots, his starring role as Joe May and his Italian heritage. Farnia is charming, witty and very easy to talk with.

Sarah Adamson: How cool was it last night for you on the red carpet and your film is opening night at the Chicago Independent Film Festival? 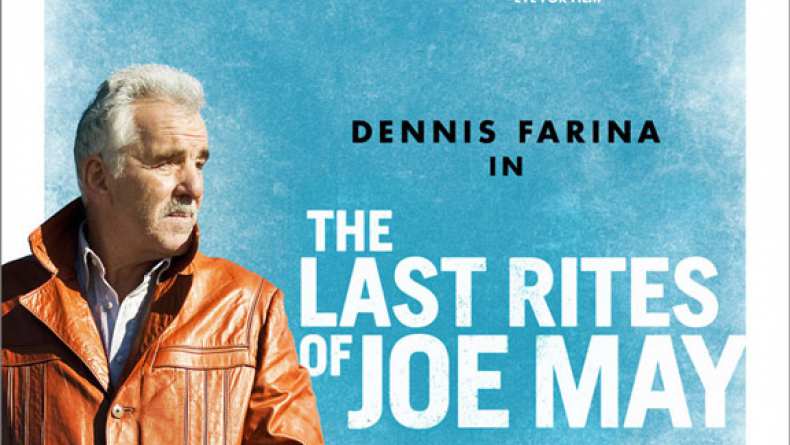 Dennis Farnia: Well, it was a special evening. Because we did the film in Chicago there were a lot of Chicago people in the film. It’s a big deal. The Chicago Film Festival is an important film festival. It was great. We had a wonderful time.

Q: Absolutely! I’m not sure if people know this or not, that you were, at one time, a Chicago police officer? Eighteen years, is that correct?

A: Yeah, but I rarely discuss that. It was so long ago.

Q: This leads perfectly to my next question, what drew you to acting?

A: I met Michael Mann. I really had no intention of anything but I met Michael and a series of things happened and here I am and here we are talking. Life just kind of goes by, I guess. I’m really not so sure about specifics anymore – about when it happened, how it happened, where it happened or anything like that but I was in the right place at the right time. An opportunity came up and I thought I should take advantage of it.

Q: Do you feel like you are really following your passion, living your dream through acting?

Q: Your character, Joe May, is so well written. As a viewer, you can’t help but root for him even though he’s a hustler and everything. Is this one of the reasons you were drawn to the film?
A: I remember getting the script and about four to five pages into it I knew I wanted to do it. It all worked out from then. It was originally set in New York. We asked Joe if he would come to Chicago take a look around Chicago and see if we can fit Chicago into it and he did. I think we converted him; he might be becoming a Chicagoan. It all worked out but I knew right away that I liked the script. It was really well written.

Q: Absolutely, I think that is the key to most films! And, you know, filming in Chicago, it doesn’t get any better than that!

A: Yeah, and you know what? We did it in the dead of winter and purposely because we always thought that weather should be another character in the film. If you do this film in June or July or when it’s spring or when it’s beautiful outside it’s a different film.

Q: The scenes with Jenny’s daughter, Angelina, the little girl in the film, they’re so heartwarming. They show your character’s soft side. Did you draw on that from raising your own children?

A: You know, I’m going to tell you, the most difficult part of doing this picture…because Meredith (Droeger) is so..I remember meeting her in the casting session and I looked at that face and the first thing you want to do is just hug her. She’s just so cute and she’s very accessible. It was very hard for me not to do that as a character in the film. When you look at that face and you say, “Boy, this poor little girl, she’s going from pillar to post and this guy is beating up her mother.” You just want to grab her, hug her and take her for an ice cream cone or something, you know? But Joe Maggio said, “No, you can’t do that. You have to resist that because you’re in so much trouble (Joe May, the character you can’t take on anything else. You’ve got to talk to her like she’s a 60-year-old man, like she’s your contemporary. You’ve got to talk to her like she’s another guy. You don’t know that distinction because your relationship with your own son has been destroyed.” It was hard for me not to do that. When he refuses to hug Jenny, he said, “You can’t do that.” I called him the prince of darkness because you know, “Do you have any blood running through your veins at all Joey?” He said, “No, you can’t do it.” That was the hardest part of doing it.

Q: There was a moment that garnered a laugh from the press when I saw the screening and it was when you were tucking her in bed. You were trying so hard to do that right (laughs) that was great!

Q: Another scene that I just loved was when you were carrying around that 50-pound lamb shank. Gosh! That looked like it was really heavy. Did you really carry that around?

Q: The music in the film is absolutely wonderful. Did you have a hand in choosing any of it?

A: No, that was all Joe Maggio. He did all of that.

Q: Do you listen to Verdi ?

A: My parents are Italian immigrants so we always had music going on, my mother especially. [She] was born and raised in Florence so she was playing opera all the time.

Q: What do you think viewers will take away from this film?

A: That there is a little hope in all of us and not to be so quick to judge people. If you look at Joe just on the surface he’s one kind of guy but if you start peeling away the onion…

Q: Yeah, he seemed like the type of guy that if he had been given a couple of good breaks in life he would have turned out very differently.

A: I don’t know that he would have changed professions but he may have taken his chosen field a little higher than the kind of guy he turned out to be.

Q: What advice do you have for aspiring actors?

A: I get that asked that a lot. The only thing you can say is if you really think you can do it or if you really want to do it just go and do it. Don’t let anybody tell you not to do it or give it up or anything until you feel like you’ve exhausted everything. Just keep doing it.

Q: That’s wonderful advice. Thank you so much for chatting with me!