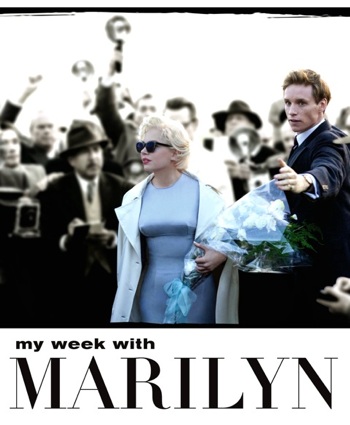 Michelle Williams and Eddie Redmayne in MY WEEK WITH MARILYN
A Portait of the Talents and Persona of the International Icon The Skinny: Memoir, Historical fiction − Weinstein Studios The film is written by Adrian Hodges and is based on the memoirs of Colin Clark. Director: Simon Curtis RT: 1 hour 39 Minutes Scenario: Colin Clark (Eddie Redmayne) a 3rd assistant director on the film, “The Prince and the Showgirl” spends the summer in 1956 in England with Marilyn Monroe (Michelle Williams) while they are both working on the film. Kenneth Branagh portrays Laurence Olivier, and he’s the director and star of the film, “The Prince and the Showgirl.” The film, being a memoir, is the retelling of what happened through the eyes of Colin Clark during that summer. At the time, Monroe was married to playwright Arthur Miller but during the week that he leaves, Monroe depends on Clark for personal comfort. Film Critique − What to Expect: The success of this film depends on who is cast to play Marilyn Monroe and Michelle Williams is amazing. She rose to the enormous challenge of portraying the iconic beauty Marilyn Monroe, capturing both her physical nuances as well as her distinctive personality attributes such as her sultriness, playfulness and sadness.

She gave me chills as she perfected many of Monroe’s characteristics. Her playful personality and her dark flip side (her depressions) were spot-on.

Also notable is Kenneth Branagh whose character adds humor to the film. He’s also very good in his role and could be nominated for Best Supporting Actor. As the lovesick, much younger Clark, Redmayne is fine in the role, but the chemistry between them is just so-so. The film lacks structure and is slow. Director Simon Curtis was in Chicago and I did have a chance to meet him. He told me that filming took place in the exact same location that was used to shoot “The Prince and the Show Girl” in 1956. Notable Script Lines: “That’s the first time I’ve ever kissed anyone younger than me.” “I want to be the best actress I can be.” Both lines are by Monroe. To See or Not To See:
See it, if you have any interest in Marilyn Monroe. The film showcases the acting ability of Monroe (as well as Williams) and both of their talents as an entertainers. Other Cast: Judy Dench (Dame Sybil Thorndike), Emma Watson (Lucy, wardrobe assistant), Dominic Cooper (Milton Greene,) Julia Ormond (Vivien Leigh), Dougray Scott (Arthur Miller) Sarah Adamson © December 19, 2011