“Say something funny.”  “Tell me a joke.”  Comedians are often put on the spot and requests like these can cause them to cringe, for even they can’t be funny all the time. But this weekend at the TBS Just For Laughs comedy festival, Chicago played host to some of those who probably rise to the challenge more often than not. The event, although unconventional as far as ‘festivals’ go, was well run and delivered a surprising and refreshing mix of both raw and developed chops.

The first show I attended was on Friday night at the Chicago Theatre. Aziz Ansari, one of my personal favorites, was the headliner but his opening act, Chelsea Peretti, upped the ante and made him work for his name on the marquee.  She has written for “Parks and Recreation,” “The Sarah Silverman Program” and the “MTV Movie Awards.” She touched on everything from late nights lost to Facebook to how eating (particularly bananas) in public and on dates is just wrong. Her delivery and material were accessible, honest and unbelievably funny.  And, you know, things are always funnier when they’re true. 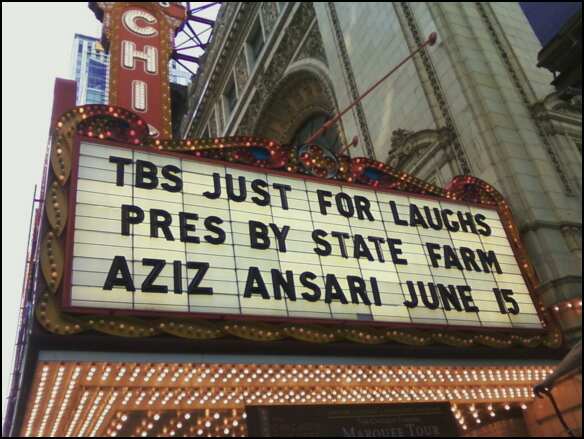 Aziz Ansari, a regular on “Parks and Recreation” who has been in many recent films, appeared dapper in a tuxedo with a carnation pinned to his lapel.  He struck a few poses to give the audience a photo op then launched right into his performance. Most of Ansari’s material was centered on the fact that all of his friends who are his age, 29, are now getting married and having kids.  He did stray from this topic a few times and had some standout moments like when he made fun of his friend’s match.com criteria, “Jewish and in my zip code.” Regarding bullying, Ansari said that when he was a kid his angry teacher from the South put a halt to it with the words “I will end you.”  He closed with two very funny stories about meeting the singer Seal and President Obama (on separate occasions).  In regards to the evening he met Seal, Ansari apparently doesn’t remember bidding at an auction but is now the winner of a role as an extra in the next Tyler Perry movie with a guest of his choice – you guessed it, Seal.

Saturday I headed out to Park West to see Stephen Merchant. He has many well-deserved awards and is most known for being the co-writer and co-director of the British version of “The Office.”  I was instantly charmed by his dance entrance and brilliantly quick wit right out of the gate.  I laughed nonstop and he brought jokes full circle, which really built momentum and flaunted his skill for solving the comedic puzzle. He did bits about a hat he’d been given as a gift from his parents, which had a metal plate on the front inscribed with “Intensity,” which he is not at all.  He’d also been given a t-shirt with a photograph of his parents on it, which was woven into many punch lines throughout the evening.  He got volunteers from the audience to help him reenact a play he’d written in 8th grade and he later read letters he’d written to the BBC as a child correcting some factual errors they’d made in their programming.  His show was a delight and set a great tone for the rest of Saturday night. 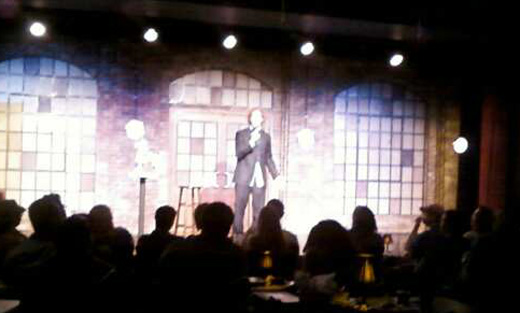 My second show on Saturday was the T.J. Miller Performance Anxiety set. As a big fan of Miller’s and having previously seen him live I was eager to be entertained again by his nuanced, awkward and perfectly timed thoughts. The comedians on the bill were a mix of local, regional and West coast talent.  Going up after Miller, the evening’s emcee, must have been unnerving but a handful of comedians, Brian Babylon, Lil Rel and Streeter Seidell, got a good reaction from the crowd.  Miller closed out the night with his own longer set and had everyone doubled over with laughter.

Sunday night rounded out the festival with hometown hero Vince Vaughn hosting a Wild West Comedy Showcase.  He brought in some big names as well as some young hopefuls who already seem quite seasoned and comfortable in front of huge, sold out crowds.  Colin Jost was terrific and, like a running theme for the festival, commented on the intricacies and pitfalls of Facebook as well as relationship arguments that are like a scene from “Inception” – a fight within a fight within a fight, etc.  Steve Byrne was, by far, one of the most hilarious people I’ve ever seen.  His delivery, material and connection to the crowd were incredible. Later this year he will be starring in “Sullivan and Son,” a new TBS sitcom produced by Vince Vaughn.

The ensemble of talent, Vaughn included, picked someone from the crowd and reenacted a scene from “Scarface” with water guns.  Vaughn did his notorious “I like where you’re going with this, I like where your head is at.  I dig the passion.”  This had the crowd howling.  At one point he asked the volunteer to repeat a fairly graphic line from the movie and he wouldn’t do it so Vince said, “I said it and my mom’s here.”  Shortly thereafter the guy realized he was onstage with a major celebrity and bucked up to the challenge.  Vaughn gave the volunteer $500 in cash right on the spot for “dying” in a kiddie pool.  They ended the night with their own rendition of Journey’s “Don’t Stop Believin” and tossed beach balls into the theater. With the crowd singing along, they received a standing ovation and what seemed to be unending cheers.

I’m so glad Chicago hosts this event and its impressive list of talent.  It’s such a treat to be entertained by impressive newcomers as well as some favorites too.  Many thanks to The Silverman Group for coordinating press passes. I’m already looking forward to lots of laughs next year!