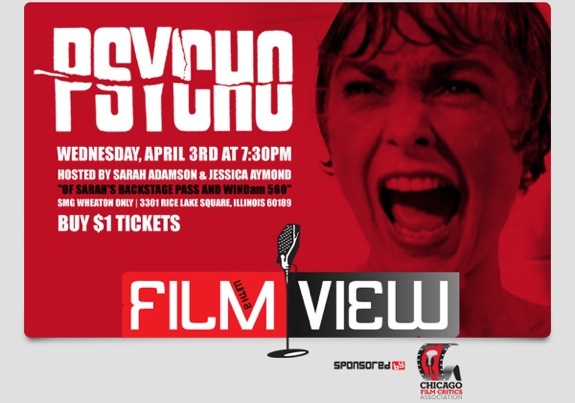 On April 3, 2013 Chicago Film Critics Sarah Adamson and Jessica Aymond hosted the Film With a View series at Studio Movie Grill in Wheaton. The pair presented the original classic, “Psycho” by Alfred Hitchcock and led the post-screening discussion.

On the first Wednesday of each month, the Film With a View series features a classic movie screening and discussion with members of the Chicago Film Critics Association. Movie-goers can purchase their tickets and reserve their seats onlinein advance of the screenings. Sarah and Jessica were thrilled to hear that the theater was sold out with 77 pre-sold tickets attracting an audience of over 90 viewers.

This 1960 thriller, based on a novel of the same name by Robert Bloch stars Anthony Perkins, Vera Miles, and Janet Leigh. “Psycho” was Hitchcock’s first horror film and the highest grossing of his career.

Some fun facts presented during the post screening discussion included the fact that “Psycho” was the first American film to show a flushing toilet. To ensure that the flushing scene could not be cut Hitchcock, a director always known for pushing the boundaries, insisted that the script be written in such a way that the scene could not be removed. The film was also shot in 30 days. Reportedly, seven of those days were used to shoot the infamous shower scene even though it only lasts 45 seconds of the film. Originally, Hitchcock envisioned the shower sequence as completely silent, but composer Bernard Herrmann scored it anyway and upon hearing it, Hitchcock immediately changed his mind. The score is comprised entirely of stringed instruments. An interesting marketing technique used by Hitchcock was the reference to birds in this film. Leigh’s character, Marion has the surname of Crane. Perkins’ character, Norman Bates’ hobby is stuffing birds, there are framed drawing’s of birds in Marion’s motel room and Bates jokes to Marion that she eats like a bird. Hitchcock’s next film was “The Birds.”

Join the Chicago Film Critics on Wednesday, May 1st at 7:30 pm for the next film in the series, “The Unusual Suspects” a neo-noir crime-thriller starring Steven Baldwin, Gabriel Byrne, Benicio del Toro, Kevin Pollack and Kevin Spacey.