Sarah’s Backstage Pass is pleased to report that the first annual Chicago Critics Film Festival was a true success! The three-day festival from April 12-14th at Muvico Rosemont was comprised of more than 20 features and short films from recent festival favorites to currently undistributed works, all receiving their Chicago premieres while reaching an extensive variety of genres.

The festival was organized and presented by the Chicago Film Critics Association (CFCA), an organization of over 50 Chicago-area print, online and broadcast critics that has been celebrating and promoting the art of film for over 20 years. The CFCA paved the way as this is the first time a film-critics group has ever hosted its own film festival. The objective of the festival was to cast the spotlight on films that would not normally receive considerable exposure.

Films presented included the coming-of-age comedy â€œThe Kings of Summer (featuring Chicagoan Nick Offerman from Parks and Recreation  and Declare War, a trippy action-comedy in which a children’s war game is seen exclusively through the eyes of its participants. The festival also featured â€œThe Institute a documentary about an Alternate Reality Game in which the real and the fictional merge together in unexpected ways, an off-beat superhero Sparks and the inspirational documentary “When I Walk” Credit to the Chicago Critics Film Festival website.

There were several appearances by directors, actors and filmmakers throughout the weekend including Oscar-winning director William Friedkin (The Exorcist), actor Jake Busey (Sparks), filmmaker Sarah Polley (Away From Her) and director James Ponsoldt (The Spectacular Now). 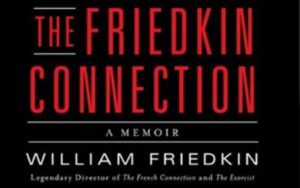 On Sunday evening Friedkin signed copies of his newly published memoir “The Friedkin Connection” and held a Q&A following one of his classic films. Sarah Knight Adamson and Jessica Aymond from Sarah’s Backstage Pass screened the dramedy “The Spectacular Now” centering on a troubled high school senior’s outlook on life and how it is transformed when he unexpectedly meets the “girl next door.” Sarah and Jessica also attended the Q&A session with director James Ponsoldt where they learned that the film was shot during the hot summer months in Athens, GA, Ponsoldt’s hometown. Ponsoldt said that he wanted to bring light to a film about teens in a lower class as opposed to the abundant number of teen movies featuring rich suburbanites and models. It was also apparent that he had a clear vision when casting. Ponsoldt said he was “blown away” by Golden Globe nominee Shailene Woodley, when he saw her in “The Descendents” and that her genuine interest in the script and role sealed the deal. He was also very intrigued by Miles Teller’s performance in “Rabbit Hole,” opposite Nicole Kidman, which landed him the main character in “The Spectacular Now.”

The festival certainly succeeded in generating attention and interest with such talented work. Sarah’s Backstage Pass looks forward to what’s in store for next year’s Chicago Critics Film Festival.