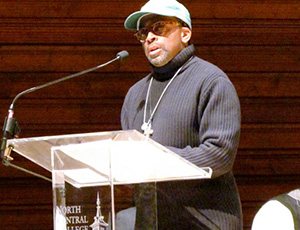 If you ever have the chance to listen to Spike Lee speak, then go. He’s the kind of guy that has opinions and isn’t afraid to express them−regardless if you agree with him or not; he’s just plain cool to experience. He teaches at NYU Film School and is passionate about film along with so many other topics.

North Central College President, Harold (Hal) Wilde’s introduction of Spike Lee last Tuesday evening included a reference to a recent phone call he’d had with Lee. You see, several Italian-American groups’ planned to protest Lee speaking at North Central College for their annual commemoration of Martin Luther King. These groups claim Lee has depicted Italians in a stereotypical and demeaning light in some of his films.

After listening intently to Lee speak for about 75 minutes, it was unfortunate that he felt obligated to start the evening by defending himself regarding the attacks−as more time could have been devoted to his vast wisdom and knowledge as an accomplished filmmaker and professor.

To demonstrate his point, Lee quoted degrading African-American script lines from famous Italian-American directors’ films; lines that would make anyone uncomfortable. He apologized in advance and told everyone he hoped there weren’t any little kids in attendance. He also asked that we don’t name the directors nor the films.

After reading these script lines he asked, “What is the problem here?”

“These directors aren’t racist, they’re humanists, as am I.”

“Why the disconnect?” Lee sees no difference in the films he read lines from and his own work. He went so far as to say that those groups should be protesting the television show, ‘Jersey Shore.’

Lee, 53, was both entertaining and inspiring−touching on a variety of topics. He spoke about his Brooklyn upbringing, his Morehouse College days, personal stories (one included a phone call and visit from Michael Jackson), advice to college students, enlightenment on Martin Luther King, his love of teaching at NYU Film School, concerns about the African-American family and lack of father figures in the homes and how crack has changed the American culture.

“My Grandmother lived to be 100 years old, her Grandmother was born into slavery yet she has a college degree. She taught art in the public schools for 50 years and she’s the reason I was able to afford to go to college,” said Lee.

Lee’s grandmother not only paid for his college, she paid for his Master’s degree and gave him seed money for his first major film. “I was lucky, because I grew up in a family that valued education and allowed me to follow my dreams.”

Talking directly to the students, he stated that they should find a major they truly care about and try their best to excel in that area. He warned students to choose carefully and find out what they love. “If you find what you love…then it’s not work. Man, I jump out of bed at 4:30 am for a 6:00 am film shoot,” said Lee.

He urged everyone to find out more about Martin Luther King, stating that the majority of Americans really don’t know who he was. “He stood for so much more than the saying, I have a dream.” Go to www.thekingcenter.org/ and ‘get your King on’!”

Lee told the audience that he enjoys teaching at NYC Film School and is very honored that 6 of his students have films the have been accepted to the Sundance Film Festival this year.

After his presentation, he walked to the middle of the stage and sat on a stool for the question/answer portion of the evening.

When asked about what legacy he would like to leave behind, Lee hoped that his entire body of work as a whole (his 25 films) would be remembered.