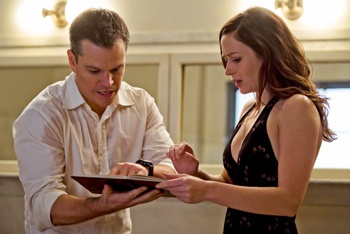 Matt Damon and Emily Blunt in “The Adjustment Bureau”

What would you do if you knew your future was already determined? Your destiny is run by a mysterious group of irrefutably powerful men who will stop at nothing to keep you “on plan” even if that means denying you of what is most important in your life?

“The Adjustment Bureau” is loosely based on a short story from 1954 called, “Adjustment Team” by Philip K. Dick who also wrote, “Minority Report.” The film truly challenges our beliefs; can we change our destiny if we fight hard enough for what we want or is our book already written? This is sure to spark some debate. It is interesting to point out that this incredibly intense film does not resort to much violence. It seems like most films these days tend to fall back on sex, drugs or violence and in turn, lack in the storyline or elsewhere. This film, however, creatively challenges the mind, consistently.

Does the cast deliver? Absolutely. This is a character driven film starring two incredibly talented actors, Matt Damon (“True Grit” 2010) and Emily Blunt (“The Young Victoria” 2009). The strong chemistry between Damon and Blunt make it easy to feel sincere empathy for both characters, drawing the audience deeper into the story. Damon’s contagious smile is also hard to deny in this perfect fusion of action, sci-fi, romance, thrill, and mystery.

Writer and director, George Nolfi (writer of “Ocean’s Twelve” and co-writer of the “Bourne Ultimatum”) was spot on with his camera positioning in “The Adjustment Bureau.” He perfectly captured the characters’ ever-changing emotions through his use of tilts combined with close-ups and extreme close-ups, especially with Damon. Nolfi keeps a swift pace with strong character development and just enough explanation that you don’t become “Inception” frustrated by the end.

It seems as though the determined, young congressmen running for New York senate, David Norris (Damon) has everything going for him. He is up in the polls and could be headed to the White House. After a photo of Norris mooning his friends at a college party coincidently surfaces the day before the election his world is turned upside down. It is the day of the election. The ballots are being tallied and the opponent now has an unbeatable lead in the senate race. It is over for Norris. He heads to the men’s room at the Waldorf hotel to work on his concession speech. Much to his surprise, he finds a woman, Elise (Blunt) a ballet dancer, hanging out in the men’s bathroom. Why is she in the men’s restroom you may ask? I will leave that for you to find out. Most importantly, this moment changes Norris’s life forever. Shortly after their first meeting, Norris runs into Elise again on a bus. Determined never to let her get away again, he asks for her number. Norris and Elise part ways for their daily duties, but before he knows it, Norris is drugged and wakes up tied to a chair in a large, empty warehouse. Surrounded by serious, intimidating and stylishly dressed men in fedoras, Norris learns they are the agents of Fate – the men of the Adjustment Bureau who will conspire to keep Elise and Norris apart as it is not part of “the plan.” These mysterious men inform Norris, “If you stay with her it not only kills your dreams, it kills hers.” Either way, Norris must face the consequences. Will he accept his predetermined future and let her go, or risk everything by defying fate to be with her? Bottom Line? “The Adjustment Bureau” is a great date night movie. Women will engross themselves in the love story while men will get their dose of high-speed chases, politics, action and suspense. Jessica Aymond © March 4, 2011