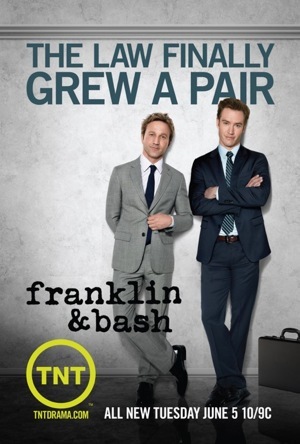 I wanted to let you both know that I interviewed Malcolm McDowell this past August (2011) and he told me he enjoys working on the show. What is it like working with a legend like this?

MG: It’s exactly what you’d think it would be. Malcolm is a little odd. He’s a lunatic – in a good way. He’s got such a fire and such a passion and it translates to what you see on the screen. He’s an amazing actor. He comes to work prepared everyday. He gives so much to us and allows us to use it as a platform to make some good TV.

Have you learned anything from him about acting?

Mark-Paul Gosselaar:I think I’ve learned that you can still have passion and that fire even after being as successful as he is. There is really no reason, we don’t have any of this on our set, but you hear of some of the attitudes that some actors carry with them and there is really no reason to have that. Especially, when you look at somebody like Malcolm.

How do you feel about Malcolm being on the show?

Breckin Meyer: I think, from the get go, it gives it…when we did the pilot, instant credibility and instant weight. Malcolm is a living legend and he’s so respected by everybody. It made the project instantly more legit.

Could you tell us a little bit about your characters.

BM: I played Jared Franklin who is a kid who grew up with a very powerful litigator as his father and he kind of vowed never to follow in his dad’s footsteps because his dad was all about winning. He didn’t want to do what his dad did but when he grew up he realized it was his calling…but if he was going to do it he was going to do it on his own terms. He partnered up with his buddy Peter Bash who is played by Mark-Paul Gosselaar and now he is going to tell you a little bit about his character.

MG: My character was a high school quarterback. He was in theater as well. I wouldn’t say he’s the smartest, but he’s persistent and good at what he does. They compliment each other well, the two characters. They’re not Type A or Type B. I think they can see the bigger picture together and just have different ways of getting there in the courtroom.

I was an avid fan of Boston Legal, but I think your show is hysterical. It’s really funny. Do either of you have input on the writing?

BM: The fourth episode you’ll see, which guest stars Seth Green, who is a buddy of mine…but I wrote that episode. Kevin (Falls) and Bill (Chais) (creators) really structured the whole season. We give as much input as we want but we tend to not need a lot. They get these guys. They created the characters, they really understand them. For the most part, we trust them. We trust the journey they want to take the characters on.

I see your relationship takes on the term, “bromance.” Why do you think you two work so well?

BM: I think this chemistry…it’s similar to a relationship, you can’t really pinpoint why it works you just know when it doesn’t and when it does. We didn’t know each other before this really, but Mark already had the job and when I came in and read with him it just felt right. One thing I will say is we both have similar ways of working. We both show up knowing our lines and then ready to have fun. We take the work seriously but we don’t take each other too seriously.

How do you compare your show with the award winning Boston Legal?

BM: I’m a huge fan of Boston Legal. I think Mark and I both, I can speak for you here. We’re big fans of it. I like things that are dramatic but then have a lot of fun with the comedy. Truthfully, that’s both of us. It’s drama, comedy and action. It’s all that stuff. What drew me to the show is that it had all of that. I had never done an hour-long drama. I had never done an hour-long series. The fact that this show kind of jumps around a lot – I knew I wouldn’t get bored.

What can viewers expect in the coming season?

MG: We start off, the first episodes with Peter and Jared becoming partners and immediately they are bestowed a lot more responsibly. Now, they have to represent clients who bring in money to the corporation. One of their first clients is played by Kevin Nealon. He is the CEO of a beverage company. He is infringed upon by a smaller company and he wants to completely wipe him out. Franklin and Bash aren’t really the underdog anymore. They are representing the man. So they have to deal with that and more responsibly. The humor is what separates us from the other legal dramas.

Can we expect a little bit more character development?

MG: You have to. Second season we do have to involve the characters. There is a love interest for Peter in the beginning for two episodes. There is a love interest for Jared toward the end of the season played by Shiri Applyby. Beau Bridges comes back to play Jared’s father, Jane Seymour comes in and plays Peter’s mother. We develop all the characters across the board from Pindar Singh to Stanton Infeld. We find out toward the end of the season why he hired these guys in the first place. It’s not what we thought. We also do a flashback episode where we see these two, Franklin and Bash, how they met, grew up, studied law and became partners.

What actors do you admire? Who do you really like to see? Either on television or on the big screen?

BM: I’m a big fan of actors who can kind of do it all. I grew up loving Richard Dreyfus, Michael Keaton and Tom Hanks, Bill Macy and everybody’s favorite Daniel Day Lewis. I hope we are going to get him for season three of Franklin & Bash.

MG: Probably the list that Breckin gave is pretty safe. I do like Jeff Bridges, I like the characters Jeff Bridges plays. Gary Oldman is another fantastic actor.

Is there anything else you’d like to say about Franklin & Bash?

BM: This year is good for us as well. We have a lead-in this year. We are on an hour later. We are on at 10’o-clock this season following Rizzoli & Isles, which is really important for us because we have a lead-in now and it could expand our fan base a little more. We’re just hoping for another fantastic year!

I want to thank you both so much for chatting with me and best of luck with the show!