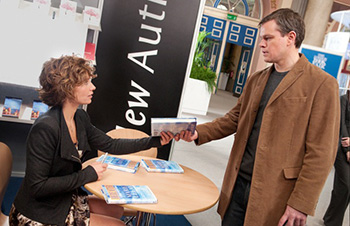 Cecile De France and Matt Damon in “Hereafter”
He Sees Dead People When He Grips Your Hand Clint Eastwood directs a very different type of film, that some will probably not like due to the nature of the subject − death. I find the topic difficult as our family lost my 42 year old sister in 2001− yet the film is very good in terms of intriguing characters, cinematography and most particularly, Eastwood’s directing. The screenplay is penned by Peter Morgan (“Frost/Nixon,”The Queen”) and stars Matt Damon as George a psychic of sorts, who upon taking your hand can see people who have died that are close to you and as a bonus, can relay messages from them. Newcomer to American film, Belgium actress, Cécile de France plays Marie who has a near-death experience during a tsunami and her reality going forward is questioned. Twin boys around age 10, (George McLaren and Frankie McLaren), experience death as one of them is killed and the other is left searching for answers. All three characters struggle with the subject of the afterlife and as viewers we experience their plight.The filming was completed on location in London, Hawaii, Paris and San Francisco which adds to the appeal of the film.
The film opens with a couple vacationing in a luxury resort near the ocean. Marie, a French journalist, decides to stop by the market to pick up a few last minute gifts when she’s suddenly swept up in a tsunami and nearly drowned. These scenes are filmed with such precision and reality that I screamed out loud when she was forced under the raging waters by a steel beam. Marie recovers, goes on in life, but she’s haunted by the near death experience and becomes very distracted in her job. In London, the twins are dealing with an addict of a mother, as child services is ready to take the kids from the home. I found the boys very difficult to watch, as their daily struggles are enormous; an addict mum, bullying at school and fear of being taken away. What else could possibly go wrong? They have a special bond and are such a comfort to one another that by the time one of them is hit by a car, the film almost becomes unbearable. Meanwhile, in San Francisco, George is dealing with an entrepreneur minded brother who has plans of setting up offices where George can perform his psychic powers and rack in some big bucks. He’s not too keen on this idea and bolts to London. Eventually, all three of the stories come together in an ending that works. Eastwood’s directing is the star here and the idea that we will see our loved ones again. If you believe in this theory then you’ll probably like the film; if not, it could be viewed as a real downer and somewhat hokey. I thought the scenes between George and the newfound girlfriend dragged on too long. He does have a sad life as he tells his brother, “A life that’s all about death is no life at all.” The role for Damon was unique as well − such a great actor and it was really great to see him in this role. De France is also interesting to view on screen; although in the film, they toned down her age and beauty. In person, she’s much younger and absolutely gorgeous. I interviewed her in Chicago and she’s delightful with a charming personality. No doubt, we’ll be seeing more of her in American films in the future. (I know director Danny Boyle’s face lit upon meeting her at the luncheon I attended for the CFCA). Bottom-line: The film is NOT for everyone, as it strikes raw nerves. If you can enjoy it for the cinematography, Eastwood’s directing and the amazing film locations then you just might enjoy it as much as I did. Sarah Adamson © October 24, 2010