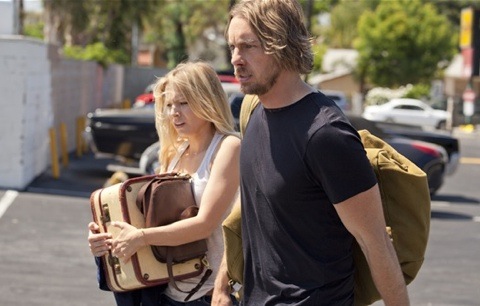 Kristen Bell and Dax Shepard star in the action packed rom-com, “HIT & RUN.” Photo Credit: Open Road Films
Run to the Theater for this Sure Hit

When Charlie Bronson gets a knock from the past he moves, and he moves fast.

From the producer of “Wedding Crashers” (2005), “Hit and Run,” fuses comedy, crime, romance and action to ignite one wild ride. This engaging indie flick is written and co-directed by the star of the film, funny guy Dax Shepard (“Parenthood”).

Charlie’s (Shepard) sketchy past as a getaway driver comes back to haunt him after he decides to exit the Witness Protection Program to drive his fiancé Annie (Kristen Bell, “When in Rome” 2010) to Los Angeles to interview for her dream job at UCLA. Along the journey, Annie discovers that Charlie or “Buddy” as she calls him, isn’t exactly the man she thought he was.

“Hit and Run” is witty, sincere, thrilling and thought provoking. Most probably wouldn’t guess that this is a low budget film. Amazingly, you don’t have to watch “Fast and the Furious” in order to catch your car chasing fix; “Hit and Run” has plenty of speed, wacky vehicles and crazy driving. The script is polished and a plus is Shepard and Bell’s off screen romance shines through in the film. They are hysterical together. Although, I wish Shepard’s character was a little less passive. It is apparent that he is trying to show his future wife that he’s turned his life around but it doesn’t mean that he has to follow her on a leash.

This would probably be more of a guy’s film due to the non-stop car chasing, shooting and different vehicles involved. Even if women don’t enjoy extreme speed and lots of burning rubber, they will appreciate the comedic aspect. The trailers don’t seem to do this film justice. It is safe to say that most audience members didn’t walk in with any expectations but that they certainly enjoyed themselves. There are major thought provoking moments throughout the film, especially at the beginning and the end. Charlie always manages to calm Annie down with a few simple words, “The only moment you need to worry about is now. You’re exactly where you are supposed to be. You’re exactly who you’re supposed to be. Whatever happens today is exactly what is supposed to happen.” It sounds simple but it is amazing how quickly one can forget those words of wisdom. The theater filled with a round of applause at the end.

Their road trip is filled with intense action scenes captured by a hand-held camera, all while they are in constant pursuit by the police led by Randy (Tom Arnold) and the head of Charlie’s former gang of criminals, Dimitri (Bradley Cooper). Randy is a reckless, high-strung marshal who tries to keep up with Charlie but is always lagging behind in his totaled Dodge Caravan. He adds hilarity to every scene. At one point, Randy is pulled over for “driving at Nascar speeds.” After the policeman (Jess Rowland) plays hardball for a while, they both realize that they’ve installed the same phone application, “Pouncer” which is basically a “gay-dar.” The radar pulsates rapidly as they stand before each other. It is quite comical to see a flamboyantly gay cop play such a tough, masculine role.

The soundtrack is a great addition to the film featuring songs like “Voodoo Child” by Jimi Hendrix and “Knockin’ On Heaven’s Door” by Bob Mervak.

Cooper plays the dreadlocked bad boy for a change and he packs a punch. In fact, some audience members may not recognize him under his yellow tinted sunglasses and oversized hoodie. Shepard is excellent in his tatted up, scruffy, tough-guy-but-teddy-bear-underneath role. The upbeat, go-getter, Bell is always there to provide words of wisdom whether it is a serious matter or witty remark. Kristin Chenoweth is a sassy, snarky boss who doesn’t hold anything back. She supplies some laugh out loud lines.

The script, cast and direction proved very fluid. The hand-held shots and highly stylized sequences can be a risky move but it worked well thanks to direction by Shepard and Palmer. The action did not overtake the script – the relationships nor the emotion among the characters.

Shepard made an appearance at the screening in Chicago and said his inspiration for the script came from the “Smoky and the Bandit” films that he watched growing up. He is from Detroit, Michigan and actually worked for General Motors for many years before heading to Hollywood. All of the vehicles you see in the film are his own. He also performed all of the extremely dangerous driving. No stunt doubles were used.

Bottom Line? “Hit and Run” provides more substance than the trailers convey. This car-chasing-comedic-crime flick has much to offer. Shepard and Bell’s chemistry lightens up the intensity. You can tell the cast had fun filming and it certainly rubs off on the audience. Be sure to stay for the credits as some familiar faces will swiftly grace the screen.