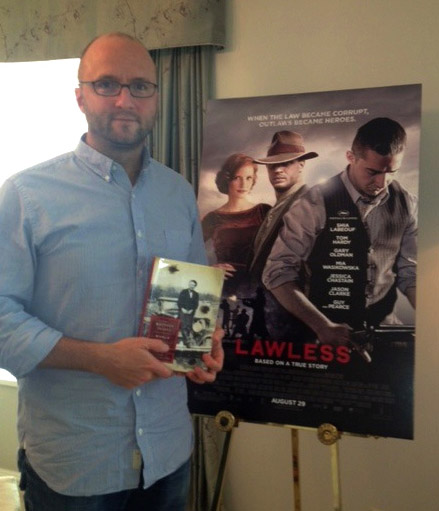 Interview with Matt Bondurant author of
“The Wettest County in the World” in which the film “Lawless” is based
Photo Credit: Sarah Adamson

Backstage Notes: I met Matt Bondurant in a suite at the Trump Hotel in Chicago on August 15, 2012. Dr. Matt Bondurant is a professor at the University of Texas at Dallas and author of the book in which the film “Lawless” is based. His areas of specialization are: Fiction and Poetry Writing, Contemporary Fiction, Postmodern Fiction, The History of the Novel, 19th Century American Literature, Romanticism and Shakespeare. He’s a serious guy that’s made an important contribution to our history books in this country while fulfilling a quest to find out more about his grandfather and uncles.
He talked about being on the movie set, watching Shia LaBeouf and Mia Wasikowska play his grandparents and the shocking scene in which his uncle, played by Tom Hardy has his throat slit. His book is enlightening, violent and reflective. In it he talks about seeing a rusty set of brass knuckles hanging on a hook near his grandfather’s gun rack. And yes, at age ten he knew what they were used for.

Sarah Adamson: I’m speaking with author Matt Bondurant, the author of the book, “The Wettest County in the World” which centers on his grandfather and his grandfather’s two brothers during the 30s. Welcome to Hollywood 360 Radio Network and Sarah’s Backstage Pass.

Matt Bondurant: Thank you for having me.

SA: It’s so nice to have you here.

SA: First of all, after seeing the film “Lawless” which has big name stars such as Shia LaBeouf and Tom Hardy to name a few. I decided that I wanted to know more about these characters so I went to the library and checked out a copy of your book. It’s fascinating. Could you tell us about its premise?

MB: Well, basically the book tries to re-imagine the lives of my grandfather and his two brothers – taking them through several exploits that we know about from historical record [and] culminating with a shooting. It tries to account for how these brothers came to be known as this notorious gang, how they developed this reputation and how some of the other events may have occurred. For example, how my grandpa was able to survive these various attempts on his life and at the same time trying to capture the spirit of this place, “Moonshine Capital of the World,” during the prohibition era.

SA: That is so wonderful. What prompted you to write the book?

MB: The only thing that prompted me to write this book…is that I had a general sense that my grandfather was involved in moonshine but those kinds of stories are not talked about in Franklin County, particularly in my family. We’re not really a family of storytellers. You don’t really talk about moonshine out in the open at all because its dangerous so there is a long history of not talking about those things. It was really only after my father uncovered some newspaper articles detailing the exploits of his father and his brothers and the dangerous things they had done. It became clear that they weren’t just mere dabblers in moonshine like a lot of men back in those days. They were a force to be reckoned with, notorious and well known. That’s when I started to do more digging. It was prompted by my own curiosity and also a desire to come to understand and know them better. My grandfather died when I was in my early twenties. I hadn’t really known him well as an adult and I regret that. Part of the book is an attempt to recapture their lives and pay tribute to these men who lived in very extraordinary circumstances and made difficult decisions. They didn’t always make the best decisions but hopefully I’ve captured their spirit as best I can.

SA: Well, we have a lot to thank you for because you’ve captured history in this country. So, I absolutely appreciate that. What surprised you the most during your research?

MB: I think what surprised me most was the sort of reputation that they had developed. It’s not as if people on my father’s side of the family walk around intimidating people or pistol whipping people yet they were a highly feared group of men. They were known to do things in a violent fashion on occasion. That was striking to me. My grandfather was a frightening man, of course, the way that old men are to young boys. He was very stoic and a patriarch figure and I understand more where that comes from. I really wanted to get at how they came to be so respected and feared, in particular. One of the things that I created in the book as a sort of a plausible explanation has to do with Forest. Once we learn about Forest and his ability to survive these various attempts on his life, he gets this throat cut, walks to the hospital, gets shot in the stomach and survives that. Later on, a load of lumber gets dropped on him. It crushes nearly every bone in his body and he lives through that too. To me, that seemed to be a clear method of intimidation. You can’t kill this guy. That’s what people were afraid of, they were afraid of him. The movie makes that a much more central aspect of who they truly are. It really seizes upon that. To me, that was a way of accounting for the reputation.

SA: Let’s remind folks of which actor plays your grandfather.

MB: Shia LaBeouf plays my grandfather, Jack. Tom Hardy is Forrest, who is the middle brother. Jason Clarke plays Howard who is the oldest.

SA: What was it like to be on the set while they filmed your family’s history?

MB: It was very exciting. It was very thrilling…a surreal experience. My father was with me. I was thinking a lot about him and his reaction to it. He seemed to really enjoy it. He loved the level of historical accuracy and the level of detail that they had gone to in order to recapture it. I had been thinking about it long enough that I sort of created a sense of separation between it [the film] and myself. I had been consciously trying to think about it as a separate object. It’s not my book on film. It is an adaptation. I was sort of preparing in that way. Overall, the overwhelming sense was a humbleness or humility. I just felt really grateful that all of these people…there were about 50 people running around doing this thing, these actors, all this money and time…all based on something that I had written and researched in a very small way over a number of years. It was a really humbling experience.

SA: I take it that you’ve seen the movie?

MB: I’ve seen it a couple of times.

SA: What is your favorite scene?

MB: The scenes that I like the most are the ones that are directly from the book. They ran close to the book (laughs). I think the way that they did the throat-cutting scene with Forrest was really well done. Cinematically, the violence and the blood of it is shocking. Of course, that is the way I wrote it but, cinematically, the way that whole scene looks.
I thought that the scenes between Tom Hardy and Jessica Chastain…when she tells him the truth about what happened that night…I found that very moving even though I wrote that scene. They used that straight out of the book. I’ve seen it a few times and still find that very moving. Even the first time I saw the film when I was in complete hysteria of self consciousness where I’m looking at every single scene and thinking about how its different and all of the choices I made, that scene struck me as a regular movie go-er. It was a nicely done, powerful, emotional scene from two people. That one really hits.

SA: It’s a fantastic scene and I don’t think you could have had two better actors to do it.

MB: I think it has a lot to do with the performance. Of course, I obviously think it’s well written (laughs). The situation is set up nicely. To me, Jessica Chastain, really seizes that role and puts a level of emotional content in there that is really astonishing.

SA: The writer Sherwood Anderson is in your book. I enjoyed reading about him. They did not include him in the movie. Could you talk about him and his connection to Hemingway? It is so fascinating.

MB: He has a classic, sort of uniquely American story. It is a great tragedy. He came out and wrote his first book, “Winesburg Ohio,” which is a seminal piece of work. I taught it in several classes. I love that book. It was a book that Hemingway and Faulkner both greatly admired and he was essentially a mentor to both. The books were getting less and less received and his reputation started to falter and they started to openly mock him by the time he shows up in Franklin County. I discovered through the research that he was there during this trial scraping together a living doing various things. So, to me, that was a wonderful opportunity to imagine a writer that I really admire at a very unique point in his life. He was at a very low point. He died just a few years later. Here is someone who has fallen from a great height, a classic American tragedy, and now he’s following these brothers around. Early on, I was thinking about Truman Capote and “In Cold Blood” almost in a journalist sense, that he was trying to pick up clues. I felt like I needed something to represent the outsider notion. I didn’t grow up in Franklin County. My father did but we moved out. When I did spend time there as a child I was always an outsider. There were things that I was not privy to. There is a general silence that goes on but my father’s side is particularly silent and that was always very frustrating to me. I get this from my mother’s side of the family. We are the talkers. Sherwood Anderson does that for me. He’s the one who is struggling to break through this silence and I was able to use him to represent that. I can understand why they cut him out of the film because his timeline is different and it would require some level of complexity. There are already the three brothers and they really wanted to focus on them.

SA: Yes, and the film can’t be exactly the same as the book, as we know. I want to thank you so much for being our guest on Hollywood 360 Radio Network and Sarah’s Backstage Pass.