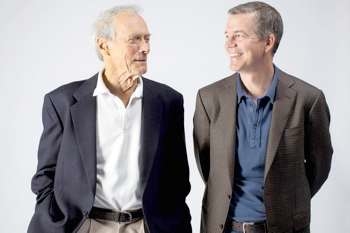 I met Rob Lorenz in a lavish suite in the Four Seasons Chicago hotel on September 4, 2012. Lorenz has been a long time collaborator and friend of Clint Eastwood’s and is making his directorial debut in the film “Trouble with the Curve.” Lorenz spoke with me about his early days of working on “The Bridges of Madison County,” attending film school at the University of Iowa and why he and Eastwood make a good filmmaking team.

Rob Lorenz: Thanks for having me.

SA: A friend of mine told me to say hello to you and commend you on your fantastic ping-pong playing skills. Do you have a clue as to who I may be referring to?

RL: Let me guess, would that be Carl Amari? (Big smile)

SA: I’ve heard that you grew up in the Chicago suburbs. Just wondering, which one?

RL: Our house was in Rolling Meadows but I went to school in Palatine.

SA: What drew you to working in film?

RL: I grew up loving movies and it was always a passion of mine. In high school I decided that’s what I wanted to do.

SA: Did you go to college in Illinois?

RL: I went to the University of Iowa. I studied film there. They had a nice film program. I got my hands on the equipment. There wasn’t a lot of competition so I was able to make a lot of movies and have fun. From there, I moved out to California.

SA: And you started working with Clint Eastwood in ’94 on “The Bridges of Madison County.” I can’t even imagine what that must have been like for you. With Clint directing not only himself but also Meryl Streep. Could you tell us a little about your early experience? RL: It was pretty exciting. It was the first really high profile film that I had a chance to work on so I was vey excited to work with Clint even though he barely knew who I was at the time. It was a really special shoot. We were out there in Iowa in the cornfields and it was just a small crew. Making that movie was fun. That was also where I met my wife so it’s a special film for me.

SA: We fast forward to 2012 with so many outstanding film collaborations with you and Clint such as “Mystic River,” “Invictus,” “Million Dollar Baby,” and “Grand Torino” to name a few. What intrigues you most about working with Clint? RL: First of all, he’s a terrific guy to work with. He’s got a great sense of how to go about making a movie. It’s a no nonsense thing. There’s no yelling and ego. It’s just a straight forward way of making a movie. He loves making movies and so do I so we bond over that. It’s a fun place to be. Because of who he is and his stature in the business he attracts amazing material, actors, scripts and things so there are always really quality projects that you get to be a part of.

SA: In “Trouble with the Curve” you direct Clint Eastwood, which is not the norm for him in over 20 years. What is it about your relationship that created this opportunity for you to direct?

RL: He’s been aware for a while that directing is what I had set out to do. We talked about it in terms of other projects that had come in and things I was developing to direct myself. I never invented my first script to be starring Clint Eastwood but when this script came in it had such a great role for him and appeal to him. He was generous enough to ask me if this was the one I wanted to try and direct.

SA: And what a film it is. It’s fantastic.

SA: I’ve read that Clint’s style of directing is a very quick shooting schedule with not too many takes. How was it directing such a legend when you felt you needed one more take?

RL: There were a few times where I wanted one more take. Usually, you try and blame it on someone else like the camera man but he is pretty savvy to all of those tricks having been in the business for so long. He was generous and gave me what I needed. In some cases, he felt he gave me all he had and that was great.

SA: Amy Adams plays Eastwood’s daughter in the film, she seems so natural in her role. Does she have connection to baseball? Is she athletic? Could you speak to that?

RL: She’s very athletic. I guess she was a gymnast. She was always moving around. I don’t think she had a tremendous experience with baseball but she jumped right in there and worked with the coaches to make sure that what she did looked authentic and real. It’s in her nature. Everything she does, she really throws herself in it. That’s why I was really excited to get her for this film because I knew she would be such a great compliment to Clint.

SA: Justin Timberlake is always so great to see on-screen and I really love it when the director or script has him sing or dance. His dancing was fantastic in the film! Can you talk about that scene?

RL: It’s kind of funny that he has to act as though he doesn’t know how to dance which is a little bit of a stretch for him. That scene, when it was in the script…I thought it was a little hokey but it ended up being one of the most fun scenes that we shot so of course it’s in the film. He had a lot of fun with it. They both liked getting up there and dancing. She [Adams] has a background in dancing as well. They were great together.

SA: What was the mood ‘off set’ with the cast?

RL: They hated each other!

SA: Well, I’m thinking it would be cool to just hang and compare iTunes playlists with Amy Adams and Justin Timberlake. Was there any of that going on? Talking pop culture ‘off set?’

RL: Well, I tried to keep it focused on the script I guess (laughs) so I don’t know how I would answer that. There are a lot of things that would come into play and lot of opportunity for jokes amongst us but we all tried to keep focused on what we were trying to do.

SA: I don’t know if I imagined this but I thought I saw a Spam hat in the film.

RL: Well, he eats Spam in the beginning. That’s when he pulls it out of his bachelor fridge. He really did eat it! I gave him a choice of a few things to eat. I was trying to convey the idea that this old guy is a bachelor and he doesn’t have much going on so his fridge is empty. He [Clint] said, “Spam that makes sense to me. That’s what I would eat.”

SA: It was pretty comical and I appreciate you sharing with us that Clint Eastwood actually ate some Spam.

SA: Is there anything else you’d like to say about “Trouble with the Curve?”

RL: No, I just hope that people understand that I was set out to make a really fun, entertaining, satisfying movie. I tried not to burden it with anything more than that. I hope people show up for it!

SA: I was certainly entertained.

SA: Rob Lorenz, thank you so much for speaking with me on Hollywood 360 Radio Network, and now I’d like to take it back to our host Carl Amari!