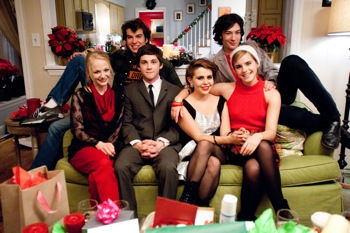 If you ask someone over the age of 30 to name their favorite literary figure from their high school reading list chances are Holden Caulfield of J.D. Salinger’s The Catcher in the Rye will be the answer. But if you ask someone younger, don’t be surprised if the response is Charlie, the central character in Stephen Chbosky’s The Perks of Being a Wallflower. Now, luckily for moviegoers, Charlie will be introduced to those who missed out on the 1999 coming of age novel.

Chbosky wrote a wonderful and memorable novel and now, not only has he penned the screenplay but directed the movie, as well. Thank goodness! Chbosky has seen to it that the essence of the story did not get lost during its journey from page to screen. A large part of the success is due to the excellent casting of our hero, Charlie. Logan Lerman (“Percy Jackson and the Olympians”) triumphantly embraces his character and gives an outstanding performance. Whether you’re struggling through your teens now or you struggled one, 10 or even 50 years ago, “The Perks of Being a Wallflower” is a relatable tale of navigating the rough terrain to feel comfortable in your own skin. It encompasses several aspects of love and acceptance. Charlie’s observation that he is, “both happy and sad, and I’m still trying to figure out how that could be,” may well be how audiences will feel as the credits roll.

The story is told through the eyes (or in this case, the pen) of Charlie as he writes letters anonymously to someone he has never met. I like that Chbosky played it this way instead of the standard journal entries; it makes Charlie’s thoughts more impactful knowing that there is someone on the receiving end, growing to care about what happens to him. Charlie is starting his freshman year in high school and is nervous. He has no friends, his older brother, a college football player, no longer lives at home and his sister Candace (Nina Dobrev) is a senior and won’t let him sit with her at lunch. He gets bullied by others and tries not to draw attention to himself.

Charlie’s luck begins to change when two things happen. First, his English teacher, Mr. Anderson (Paul Rudd), notices him and realizes that Charlie is no ordinary student. He encourages Charlie to participate, knowing that he has much to offer. Following his teacher’s suggestion, Charlie attends a football game and bravely approaches a senior student who is in his shop class. Patrick (Ezra Miller), outgoing and confident, immediately asks Charlie to join him and his stepsister, Sam (Emma Thomas). This one small act of kindness changes everything for Charlie. As Sam and Patrick bring him into their circle of friends, Charlie’s world opens up.

The other friends include Bob (Adam Hagenbuch), Mary Elizabeth (Mae Whitman) and Alice (Erin Wilhelmi). The more time Charlie spends with his new friends, the more he finds out about them, with some things less obvious than others. Patrick’s homosexuality comes as no great surprise, but his partner’s does. Sam’s beauty, kindness and happy demeanor are more evident than her unspoken past. Meanwhile, Charlie deals with his own past, having suffered, at age seven, the loss of his favorite aunt and, more recently, the suicide of his only friend. There’s turmoil in the present, as well, after witnessing his sister’s boyfriend slap her across the face.

Filmed on location in Pittsburg, the setting is the 90s but the script is timeless. Some scenes are as visually compelling as the characters. The Fort Pitt Tunnel, leading into downtown Pittsburg, proves to be meant for cinematic greatness. More humbly, but no less satisfying, the framing of a manual typewriter beckons. A snow angel speaks to us through its maker. Such pleasant subtleties sneak in here and there throughout the movie.

The casting gods shined upon this film, as, although the cream at the top, Lerman isn’t the only one with a rich performance. Rudd is just the right touch as Mr. Anderson. This may come as a shock, since it’s not a role one has come to expect from Rudd (he will soon appear in “This Is 40,” the continuation of his “Knocked Up” character), but his reserved performance translates to the type of teacher we wish they could all be. I would love to see Rudd take on more dramatic roles.

Miller, a force to be reckoned with, has a presence that’s hard to deny. In “We Need To Talk About Kevin,” he crept out moviegoers as the crazed teenager determined to hurt his mother in whatever way necessary. In “The Perks of Being a Wallflower,” he fully embodies Patrick, the gay teenager who is full of life and love, and is not afraid of confrontation. Watson, known the world over as Hermione Granger in the Harry Potter series, took a bold step in once again bringing a beloved literary character to life…and an American one, to boot. Although her English accent peeps through a handful of times, Watson is believable as the kind-hearted girl who enamors Charlie at first site.

Throughout the ups and downs in the lives of teenagers, one thing is constant. Music. In this movie, as with the novel, the music becomes a character in itself. Mixed tapes run rampant. The audience is privy to the styling’s of The Smiths, New Order, David Bowie and one hit wonder’s Dexys Midnight Runners (“Come On Eileen”) to name but a few. And, let’s not forget numbers from “The Rocky Horror Picture Show,” as the gang performs weekly at the Rocky Horror Floor Show. The soundtrack, following in the footsteps of the script, is a winner.

Bottom Line: Mr. Anderson tells Charlie, “We accept the love we think we deserve.” Audiences deserve to treat themselves with kindness. Go see this movie and make room in your heart for Charlie.

Credits: Director, Screenwriter and Author – Stephen Chbosky. Based on the novel of the same title.
Studio: Summit Entertainment, A Mr. Mudd Production