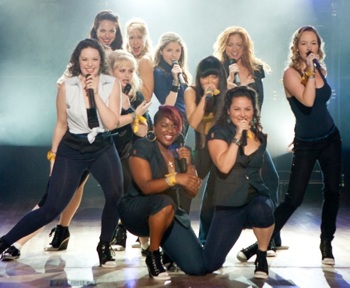 You may find yourself scratching your head and asking, “What the heck was Anna Kendrick thinking, starring in a silly comedy about college a cappella groups?” The answer? She was being one smart cookie by continuing with her wise script choices. Kendrick has dazzled audiences in hits such as “Up In the Air” (in which she received an Academy Award nomination), last year’s “50/50,” and the recently released “End of Watch.” In “Pitch Perfect,” she flexes her vocal chords along with her acting chops for a winning combination. The remaining ensemble cast is also impressive, giving the humorous script (written by Kay Cannon) just what it needs to hit a high note with audiences.

“Pitch Perfect,” based on the book by Mickey Rapkin, is a formulaic comedy much like the competitive cheerleading movie, “Bring It On,” only with the added musical factor. Formulaic is not always a bad thing, for as the saying goes, “If it ain’t broke, don’t fix it.” It has all the necessary elements for an entertaining comedy: outsider, nice guy, love story, funny sidekicks, mean girl, arrogant boy, competition, gross-out scene, and many laughable moments. Blend in some fun music and a couple of snarky emcees (in the tradition of “Best in Show” and “Dodgeball”) and we are left with a satisfying 112 minutes of screen time. This is the first feature film directed by Jason Moore and, although not as perfect as the title suggests, “Pitch Perfect” is solid.

Beca (Kendrick) is a new student at Barden University, where her father is an English teacher. She would rather be in L.A. working toward her dream of being a deejay, but her dad insists that she give college a try for one year. After he encourages her to get involved, Beca finds herself reluctantly joining an all-female a cappella group, The Bellas. Returning to The Bellas from the previous year are Chloe (Brittany Snow) and Aubrey (Anna Camp). Newcomers along with Beca include Stacie (Alexis Knapp), Cynthia Rose (Ester Dean), Lilly (Hana Mae Lee) and the super-confident and self-proclaimed Fat Amy (Rebel Wilson). Aubrey, the leader of the group, clings to the old, worn-out songs and choreography of the group. This quickly wears thin with Beca, who thinks The Bellas need to sing outside the box if they stand any chance of winning in competitive events.

The campus is home to four a cappella groups, including the rival all-male group, The Treblemakers, current Collegiate A Cappella Champs. The group is headed by the smug and annoying Bumper (Adam DeVine) and includes newcomer Jesse (Skylar Astin), who works with Beca at the college radio station. Unfortunately for Beca, even though she and Jesse share a mutual interest in one another, Bella rules forbid her to ‘date’ a Treblemaker.

Each of the a cappella characters are provided with witty lines, which are delivered quite well, but perhaps none so much as Fat Amy. Wilson seems to steal the lime light with each scene she’s in, just as she did in “Bridesmaids” and “What To Expect When You’re Expecting.” Camp (“The Help” and HBO’s “True Blood”) also gives a noteworthy performance as the non-trailblazing, control freak leader of The Bellas, as does DeVine (Comedy Central’s “Workaholics”), whose character is just as wonderfully annoying as Aubrey, but in a completely different way. Astin, a relative newcomer to the big screen, was believable and appeared comfortable in his role as Beca’s love interest.

I would be completely remiss if I failed to mention John Michael Higgins (“We Bought a Zoo” and Elizabeth Banks (“The Hunger Games”) in their vital roles as emcees, John and Gail. Their banter at the various competitions are priceless! In fact, I would like to view “Pitch Perfect” a second time if only for their play-by-play.

Music lovers, especially ‘Glee-ks,’ will rejoice in the variety of performances provided. The songs span several decades of pop music, from the 80s’ “Like a Virgin” (Madonna) and “Don’t You Forget About Me” (Simple Minds) to the current “Just the Way You Are’” (Bruno Mars) and “Titanium” (David Guetta). The riff-off scene, sort of an off-the-cuff singing competition among the four campus groups, was particularly entertaining. Choreographer Aakomon “AJ” Jones and music supervisor Sarah Webster are both deserving of praise. The last performance by The Bellas was impressive to watch (and hear), so much so that it makes you wish they could have gotten their aca-act together a little sooner in the movie.

Bottom Line: “Pitch Perfect” isn’t always on key, but it’s more impressive than a good karaoke performance, enough so to provide plenty of laughs and entertainment.

Credits: Directed by Jason Moore, Screenplay by Kay Cannon, Based on the Book by Mickey Rapkin.