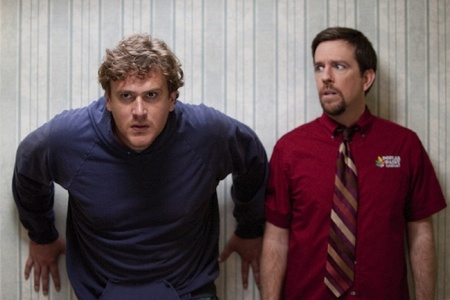 Click here to listen to Hollywood 360 AM560 WIND radio podcast with Sarah Adamson.

I can’t remember the last time I was initially frustrated by a film and then wound up in complete admiration (understatement). The trailers simply don’t do this film justice. While it is not laugh out loud funny, it addresses a deep subject matter with a light comedic twist.

The latest Duplass brothers’ dramedy, “Jeff, Who Lives at Home,” captures the lives of ordinary people in a not so ordinary film. Co-writers and directors Jay and Mark Duplass (“Cyrus” 2010) succeed in making small, innocent, awkward and seemingly pointless moments emotionally gripping.

This is not a “Hollywood” film where problems are exaggerated and then immediately solved with explosives, conquering the bad guy, getting down on one knee or having a sudden, unexplained change of heart. The simplicity of the title reflects this film of regular people with doubts, insecurities, flaws, hopes and dreams. If you need constant action or an unrealistic love story to “escape,” this film is not for you.

Jeff (Jason Segel) is 30 years old, unemployed, unhappy and directionless. He can be found watching infomercials while getting high in his mom’s basement. Despite residing at rock bottom, Jeff is a genuine guy in search of something meaningful, relying heavily on fate. His brother, Pat (Ed Helms), on the other hand, is irritable, emotionally oblivious and is about to watch his marriage to Linda (Judy Greer) crash and burn (just like the surprise Porsche he buys to ‘solve their problems’). Jeff and Pat’s widowed mother Sharon (Susan Sarandon) is having a late-life crisis – regretting her life decisions, or lack thereof. Sharon feels unattractive and unworthy, making the fact that she has a secret admirer hard for her to believe. Their father’s death took a toll on this family who has since grown apart but keep small ties out of obligation. Despite their problems, all three seem to possess a “grass is always greener” attitude.

At the start of the film, we find Jeff sitting comfortably on the pot talking into a recorder about the movie, “Signs” (2002). “Everyone and everything is interconnected in this universe. Stay pure of the heart and you will see the signs…” He describes the initial meaningless, random moments throughout the film and how it eventually comes together in the end, all making perfect sense. This is the audience’s clue as to what’s to come.

One morning, Jeff is hitting the bong when Sharon calls from work insisting that he use the money left on the counter to go buy wood glue for a broken shutter. The phone rings again, but this time it is a wrong number asking for someone named Kevin. Instead of disregarding the call, Jeff is determined to find this Kevin, convinced there is a reason for the misdial. On the bus ride into town, he sees a guy whose jersey reads the name Kevin. He follows “Kevin” to a nearby basketball court in the ‘hood. After some hoops, Kevin offers for Jeff to join him in getting high. Minutes later, Kevin’s friends arrive and Jeff is thrown against the concrete, ripped of his few possessions. Jeff begins walking into town with (literally) nothing to lose. He randomly crosses paths with Pat at a nearby Hooters. Although annoyed with his ridiculous story, Pat offers Jeff a ride home in the new Porsche that just added some major bumps in the road to his already collapsing marriage. The day progresses and problems continue to build for each character. As their lives become more entangled, each character digs deep coming to grips with their fears, realizing they aren’t alone and ultimately embracing their fate.

Although Segel’s character doesn’t possess much substance, his performance is incredibly sincere and refreshing compared to his other slapstick roles, as in “I Love You, Man” (2009). Watching Helms, you can feel his frustrations through the screen. He plays the ‘bad guy,’ a rare role for him but he mastered it. Sarandon plays the vulnerable Sharon with ease and Greer’s character, Linda, is along the same lines of her most recent role as a quiet, unsatisfied, desperate wife about to explode in “The Descendents.”

The musical score is used sparingly. The simple tugs on the guitar strings coincide with the moments that tug at our hearts. This indie sensation uses documentary style filming – hovering the camera in place and using quick zooms for incredibly important moments. There isn’t an over abundance of dialogue in this film, which makes the actors’ performances even more raw. If the movie were too scripted, it would have come off as cliché. Pay close attention, you will find a lot of symbolism throughout, especially at the very end. This plays well alongside the film’s premise that everything is a sign and we all have a predetermined destiny.

Bottom Line: “Jeff Who Lives at Home” is genuinely sweet and remarkably honest. An initially slow moving and aimless film that finds true purpose, a purpose that was there all along. You are bound to exit the theater with a smile.

Credits: Written and Directed by: Jay Duplass and Mark Duplass