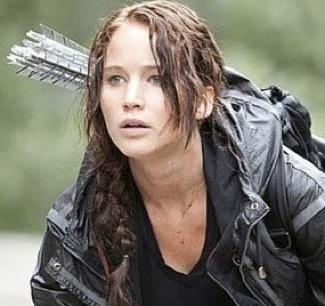 Click here to listen to radio podcast with Sarah Knight Adamson on Hollywood 360 AM560 WIND.

Will This Movie Satisfy Your Hunger? Odds Are Ever In Its Favor

Prepare yourself. Not for the faint of heart, reality television has never been so cutthroat, literally, as it is in the film adaptation of Suzanne Collins’ best selling young adult novel, “The Hunger Games.” Collins co-wrote the screenplay, which veers only slightly from the book’s storyline, with Billy Ray and Gary Ross, who also served as the film’s director. For this film, images of Ross’ directorial debut,“Pleasantville,” are nowhere in sight and the race is much different than those in his successful epic, “Seabiscuit.”

If you are among the few who have not read the book (there are over 26 million printed copies in the U.S. alone), you may be asking, “Hungry for what?” Good question. Before I answer that, let’s review some basics to get everyone up to speed.

Sometime in the future, Panem, a reconstructed nation that was once North America, is now divided into 12 districts. The Capitol is where life is good and the president of Panem resides (dictates). Each district provides a necessary service or product to the Capitol, such as electronics and agriculture. District 2 provides the Peacekeepers (police) who keep the residents of the other 11 districts under control. Because of an unsuccessful rebellion by the districts years earlier, the Capitol devised an annual competition. The Hunger Games rules require that each district send two players (tributes), one of each sex, between the ages of 12 and 18. Within each district, the tributes are chosen during the Reaping ceremony. Ultimately, the unlucky chosen ones are thrown into an arena and the game ends when 23 are dead, leaving one victor. Oh, and for good measure, the games are televised. To hear the president tell it, “This is how we remember our past. This is how we safeguard our future.”

The film feels quasi-futuristic and quasi-historical. The shiny, utopian Capitol is a drastically different setting than the shabby, dystopian districts. The arena’s setting is a forest, but it’s controlled from a high-tech gaming center. The Capitol is home to outrageous fashion for clothes, make-up and hair alike, while the constrained districts’ garb could have come straight from the Great Depression.

When Prim Everdeen’s name is called for the 74th Annual Hunger Games, her older sister’s protective instinct kicks into overdrive and District 12 has its first volunteer tribute in the history of the games. Jennifer Lawrence, who gave an Oscar-nominated performance in “Winter’s Bone,” once again delivers a satisfying, quality performance as Katniss Everdeen. A hunter by necessity, Katniss took over the feeding and caring of her family when her father’s death left her mother despondent. Lawrence is called upon to exhibit a wide range of emotional torment. Her rendering adds another level of heartache to the gut-wrenching script.

Josh Hutcherson (“The Kids Are All Right”) fills the pivotal role of Katniss’ male counterpart for the games, Peeta Mellark. Peeta lacks the skills possessed by Katniss, but has his own brand of survival tactics, namely, charisma. He knows how to play to a crowd, an important factor in the games. While Katniss’ motivation is protecting her family, Peeta quietly goes about protecting Katniss. Hutcherson carries the persona well.

A previous winner from their district, Haymitch Abernathy is assigned to mentoring Katniss and Peeta. Unfortunately for the two tributes, the former victor’s present survival mode relies heavily on alcohol. Woody Harrelson (“Rampart”) is superbly cast as the cynical, seemingly heartless Haymitch, who tells his two young charges, “Embrace the probability of your eminent death.”

Other supporting cast include Liam Hemsworth as Katniss’ best friend and hunting partner, Gale, who doesn’t get much screen time, but plays an important role. From the Capitol, Lenny Kravitz is Katniss’ stylist Cinna, Elizabeth Banks is the PR coordinator, Effie Trinket, and Stanley Tucci is the exuberant emcee, Caesar Flickerman. Since the novel was a first person narrative from Katniss’ point of view, the screenwriters used the emcee as a device to explain what could otherwise be confusing. This tactic served its purpose, but audiences may feel it is of a condescending nature.

Captivating as a whole, one of the most enthralling scenes is the start of the Hunger Games, when the tributes are raised on pedestals into the arena and the merciless action begins. Remember, these are children who are killing and being killed. Handheld cameras allow audiences to be in the heart of battle. The musical score, and sometimes lack thereof, adds to the intensity of the movie. Be prepared for a tide of uneasy emotions. Bad things happen to good people.

Bottom Line: A well-made movie in its own right, “The Hunger Games” is a cautionary tale, one worth seeing despite, or perhaps because of its unsettling nature. Rated PG-13 with very good cause, please be wary of taking a child under the age of 13 to see this movie. As a teaching tool, it can be used to open up many various topics of conversations.