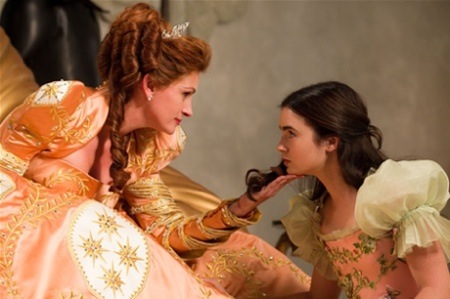 Julia Roberts is royally evil in the latest reimagining of the classic fairy tale, “Snow White and the Seven Dwarfs” by the Grimm brothers.  Directed by Tarsem Singh (“Immortals” and “The Cell”), “Mirror Mirror” is the first of the year’s two action-retellings of the fable.  Taking on a darker side, “Snow White and the Huntsman” with Kristen Stewart and Charlize Theron is expected to hit theaters in June.

This fairy tale comedy, rated PG, is for young and old alike, a perfect family flick. It is the perfect escape compared to the violence and intensity currently at the box office in “The Hunger Games.”  Audiences will be fascinated by the enchanting landscapes and architecture enclosed with a snow globe-esque feeling that sits high on a white mountaintop overlooking the kingdom. In fact, the Middle-Eastern-looking exterior of the castle is very reminiscent of Aladdin’s castle. Although the film is a little too long, dragging occasionally, the intricate and elaborate costumes seem to make even the dullest scenes come alive.

We are introduced to the royal kingdom with the Queen’s (Julia Roberts) narration, “I bet you think you know this story. You don’t. The real one’s much more gory.” Singh uses animated doll figures to catch us up on early life.  Through this clever animation, we learn that the Queen (Julia Roberts) is ruler of the kingdom since the King (Sean Bean) went off into the forest one day and was never seen again.  As ruler, the Queen uses all the power to benefit herself, taxing the already dirt poor commoners, holding her stepdaughter, Snow White (Lily Collins, daughter of musician Phil Collins) captive in the castle and using the mirror’s magic ensure she remains the fairest (and richest) of them all.

After being informed by her right hand man, Brighton (Nathan Lane), that she is broke, she decides to throw a ball, mainly to invite the incredibly handsome and wealthy Prince Alcott (Armie Hammer). Marrying Prince Alcott would solve all of her financial troubles. Knowing full well that she cannot afford this extravagant soiree, she decides to tax the commoners claiming it is “for their own wellbeing.”

During the ball, the Queen spots the Prince and Snow exchanging flirtatious smiles while dancing. The Prince simply can’t take his eyes off of her…or her eyebrows.  This is the ultimate danger zone for Snow. Much to the Queen’s surprise, Snow and the Prince have already met.  One day, Snow escaped the castle grounds to explore the terrible condition of the kingdom that her father once ruled.  While running through the forest she runs into the seven dwarfs, who are initially anything but dwarf-like.  To disguise their truncated appearance, the dwarves dress in all black, including black masks, and run around on accordion stilts.  Seeing seven of these acrobat-like figures running through the forest is somewhat freaky-looking at first sight. She finds that these good hearted but misdirected bandits have tied the Prince up to a tree and stole all of his belongings.

From this point on, the Prince has his eyes set on Snow…until a magic love potion, that is, compliments of your majesty.  Snow and the dwarves soon become best buddies or partners in crime, if you will.  After learning of the Prince’s “puppy love” spell, Snow and the dwarves must plot a diversion to stop the Prince from marrying the Queen.  A montage of the dwarves giving Snow a crash course on sword fighting and self-defense is quite humorous.

This rendering of the popular fable differentiates itself from past versions, as the seven dwarfs play a major role.  They are mouthy and full of wit. One of the dwarfs has a major crush on Snow and his delusional comments are highly entertaining.  Speaking of a hoot (yes, I just said that), Nathan Lane is responsible for a majority of laugh out loud moments with his impeccably timed one-liners. He and Roberts banter throughout and are a perfect combo in the scenes that they share.  Roberts shows her versatility in this not-so-America’s-sweetheart, evil role and, boy, does she dominate. I’d like to see her in more narcissistic, mischievous roles. Collins, who highly resembles Audrey Hepburn as Snow, isn’t given many humorous lines, but she plays the beautiful, innocent princess with ease.  At times, her innocence may borderline blandness, however.  Despite her swift self-defense moves, it would have been nice to see a little more attitude.  The performance by the handsome Hammer as irresistible Prince Alcott is effortless. Like Collins, I wish his character had a little more ‘oomph,’ too.  Even with his physical stamina, his personality resembles that of a dud.

Although incredibly entertaining, some of the humor, drama and action sequences don’t meld as well as they could. The movie wouldn’t have been complete without the remarkable production design (Tom Foden) or the outstanding costumes, designed by the late Eiko Ishioka (her final screen work before passing in January).

Bottom Line:  “Mirror Mirror” is a clever, good-natured, family film fit for all ages.  This isn’t rookie level humor, either.  The rich, sophisticated style, sharp humor and fantasy-like atmosphere, coupled with a classic story, yield just the right potion for enjoyment.  Be sure to stay for the credits as Singh adds a surprise at the end.