My interview with Jim Rash and Nat Faxon was on behalf of the film, “The Way, Way Back,” which they co-wrote and co-directed. We met on May 28, 2013 in Chicago at the Waldorf Astoria Hotel. It was a roundtable interview with Nick Allen (The Scorecard Review), Matt Fagerholm (Hollywood Chicago), Locke Peterseim (Open Letters Monthly) and myself.

Backstage Notes: Rash and Faxon received Academy Awards for their screenplay, “The Descendants.” “The Way, Way Back,” is their directorial debut. The film deals with an awkward fourteen-year-old boy who longs to fit in. His life changes when he secretly begins working at a water park and discovers an unlikely friend – the manager Owen, played by Sam Rockwell. The great thing about the movie is that Rash and Faxon are also in the movie; they play employees at the water park. It was wonderful to meet such talented and comical people. Here’s a portion of our 30-minute interview.

When asked what they would like to change about their own teen years Rash said, “I wouldn’t stress as much. I would’ve liked to have spent less time on that.

Faxon, said that he’d strive to have a little more individuality. Although he felt unique in certain aspects of his life, he also felt he conformed in others. He wished he had created his identity earlier on.

When writing a character like Owen they were asked if that was the kind of guardian angel they wished they had speaking to them at age 13 or 14. 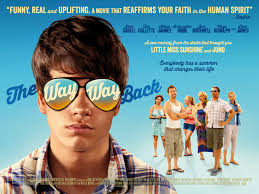 “Yes, if you think about Bill Murray in “Meatballs,” that’s our Owen,” said Rash. “[He’s] someone who’s so likeable so full of charm and he (Sam Rockwell) is in real life as well, very social and warm. You hope that everyone has that, such as a teacher, a lifeguard at a water park, a counselor at camp or even a relative who is on the outside of your life and can give you some sort of wisdom.”

As for the meaning of the title, “The Way, Way Back,” does it mean the third seat? They said it is the third seat that faces out to the back of the car as in an old station wagon. The ‘way back’ is the 2nd seat area.

Coming from an improv background, did that experience enhance their shoot? Rash stated that they both came through the Groundlings Improv Program and at the same time as Maya Rudolph, which is why she was cast in the film.

When asked how long they had been working as writing partners Faxon recalled their long history: “A long time. We met back in 1999 at the Groundlings Theater in Hollywood and we were in the Sunday Company. We started writing sketches for that, then moved to the main company, we found that we had the same sensibilities and that we wrote well together. Then, we decided to write a TV pilot. Next, we tried to write something that would be fun for us to act in. That is still something that we strive to do…to write material for ourselves.”

They both confirmed that the water park, was shot at a real working park called Water Whiz (the same name used in the film) in East Wareham, Massachusetts. Many of the extras were actually patrons of the park.

In terms of writing they were asked if they are attracted to the similarities in ‘tone’ of both “The Descendants” and “The Way, Way Back,” “It’s definitely something that we’re attracted to,” Rash replied. “Writers are always pursuing restraint; how can I say more with less? ‘The Descendants’ was a great experience for lots of reasons. We are interested in grounded, real stories.”

Faxon went on to elaborate, “Even though it’s a small thing, it boils down to character, point of view, people that we know and getting specific about them so they can connect and acknowledge that they have flaws.” He said the character doesn’t always make the best decisions and sometimes those decisions can have tragic consequences. Faxon emphasized that the characters should be real and relatable.

Did they purposely cast an unknown to play Duncan’s role? They said they both knew when Liam (James) walked into the audition he was their Duncan. They also always knew that Duncan would be a discovery. Liam had the innate qualities that they were looking for and he grew more and more confident throughout the shoot. They said it was incredible to see that transformation.

When asked about the value of nostalgia in films Rash said it gives them perspective. “Take for instance that first scene that came from my real life – an actual conversation with my step-father when I was told I was a three (on a scale from 1-10) and then believing this weird number system,” he said. “To me, as a writer, I find these things amusing to me now, as it’s too much time to waste and worry about that as a traumatic experience, which it probably was for me at the time.” Faxon concluded on the topic of nostalgia , “It was something that we started out with – wanting [the film] to feel like the 80s but we took that out because we wanted the film to feel timeless.”