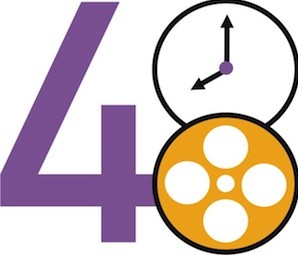 Yes, in just 48 hours, filmmakers around the globe compete in teams to create a film that will wow judges and audiences. Launched in 2001 in Washington, DC as a competition among friends by filmmakers Mark Ruppert and Liz Langston, The 48 Hour Film Project is now the world’s largest timed film-making competition. The 2013 tour makes stops in New York City, Chicago, Los Angeles, Johannesburg, Paris, Beijing, London, Mumbai and over 100 other cities. The grand prize is $5,000 and the chance to screen their film at the Cannes International Film Festival in 2014.

Film-making teams begin at 7PM on a Friday and deliver a finished 4 to 7 minute film by 7:30PM Sunday. The teams are assigned a genre, character, prop, and one line of dialogue. They must complete the entire film-making process in two days.

Judging was done via an online link to the films and a scoring spreadsheet that contained 16 categories. The process to evaluate 22 films took a little over 12 hours. Some films were reviewed 3 to 4 times. Score sheets were turned in and the awards were held on August 27, 2013 at Lincoln Hall in Chicago.

I presented 2 awards; Best Directing and Best Editing to a packed house. For myself, the experience was very rewarding and a worthwhile approach to promoting the art of film-making.

The 2013 Chicago winners are listed below:’