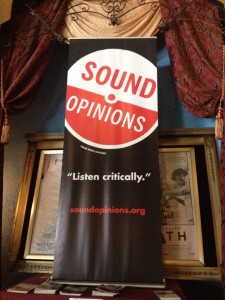 Back for its third year, the Summer Music Film Festival (June 28– July 2) showcased another incredibly unique lineup of films perfect for all of the cinephiles, music lovers and history buffs out there.   This year’s selections ranged from Woodstock documentaries to the chronicle of how downloadable music has become an industry all its own.

The charming, historic Music Box Theatre (3733 North Southport Ave.) is home to this great event and also co-produces it along with WBEZ Chicago’s Sound Opinions.  Sound Opinions consists of two nationally respected music critics, Jim DeRogatis and Greg Kot, who are the finest and best-recognized pop music writers in the nation.  For more than a decade they worked for rival Chicago daily newspapers, DeRogatis at the Chicago Sun-Times and Kot at the Chicago Tribune.  Thankfully for all of their dedicated listeners, myself included, they’ve teamed up to combine their musical knowledge into a weekly radio show with smart, fascinating and entertaining discussions about every genre of music you could possibly imagine. 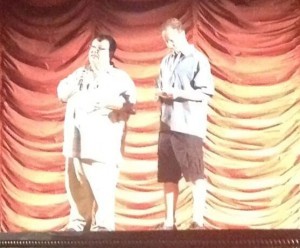 The opening night film, Ain’t in it for My Health: A Film About Levon Helm, takes a rare and personal look at the four-time Grammy winner and Rock and Roll Hall of Fame member at his home in Woodstock, NY as he creates his first studio album in twenty-five years.  As Jacob Hatley’s feature-length directorial debut he approached the project and its subject with great care and respect, affording the viewer an intimate account of Helm who is otherwise known to be quite private.  The documentary is filled with honest, heart-warming, comedic and, at times, uncomfortable moments as Helm fights an intense battle with throat cancer.

As someone not very familiar with The Band or Levon Helm, the film surprised me and appealed to more than just a niche audience of fans.  Overall the film was very well produced, featured many prominent talents within the music and entertainment industry, and rare footage of The Band at the height of their popularity in the late 1960’s.  The film was woven with wonderful musical moments from Helm on his guitar, singing a capella, playing shows in his barn, and even original audio tracks of The Band’s most notable song, “The Weight.”  Throughout the film there were many moments I wished there had been subtitles because of Helm’s quick style of speaking in a heavy southern accent and noisy scenes with many people talking at once.  As Helm was known for his quick wit and legendary stories, I feel as though I missed out on some of that key dialogue.

Described as ‘salt of the earth,’ Helm was a country boy through and through.  Despite all of the fame we see him at his most content when playing a guitar next to his dog or on a tractor on the farm.  Ain’t In It For My Health is a fly on the wall view of introspective and creative moments as well as the way most friends and family remember him – a lively storyteller and feisty spirit.  Wives and widows of The Band’s members recount memories of its heyday and disclose some of the reasons for the group going separate ways.  Between footage of the Midnight Rambles, which were shows played in Helm’s barn to raise money for medical and mortgage bills, visits to the doctor and late-nights of laugher in the kitchen, we get a true sense of the man behind the legend.

Helm’s daughter Amy sang in the Midnight Rambles band and on the record we see being recorded in the film. More importantly, though, she was providing continuous emotional support.  There is a strong family element to this documentary and I became quite attached to everyone I met within the film.  As the film nears its end Helm becomes a grandfather when Amy gives birth to a baby boy and, as if they couldn’t be any happier, Helm learns that he won a Grammy for Dirt Farmer, his first studio album in twenty-five years.   This film is great for music lovers and I also recommend it to a wide audience, as The Band definitely has their place in the rock and roll history books.

My next screening was the 1980’s New York beat film Downtown 81.   Directed by Edo Bertoglio, this film is a snapshot of the gritty, experimental and progressive culture of post-punk era Manhattan.  Downtown 81 is, for the most part, produced in a scripted narrative form but most of the cast is comprised of the actual landmark artists of that time, which gives it a more realistic feel.  The film stars renowned painter Jean-Michel Basquiat and features Village artists James Chance, Amos Poe, Walter Steding, and Tav Falco.  The original audio recordings from the film were lost so the entire film was overdubbed.  Most of the cast re-recorded their own voices in post-production but because of Basquiat’s death Saul Williams was brought on to voice his character.

The film, as it is now, is laced with overly acted and awkwardly paced dialogue from some of the characters and audio.  I couldn’t help but wonder if it’d be any better with the original audio since the inherent tone is quite campy and experimental…and very 80s.  The opening sequence shows Basquiat in a hospital bed being treated for an unknown illness.  He is then released with his belongings – just a clarinet and a bag of clothes.  On his way home a female model, Beatrice, pulls up and offers him a ride and they become fast friends.  After receiving an eviction notice he begins to look for buyers of his paintings and manages to sell a few to a wealthy middle-aged woman who is looking for more than just his art.  The arch of the film is based on Basquiat wandering the streets and nightclubs of New York looking for Beatrice as she has somehow become quite scarce.

While on his quest for Beatrice, the mysterious model, Basquiat weaves through a myriad of nightclubs and catches performances by Kid Creole and the Coconuts and James White and the Blacks.  Finally, in a strange turn of events, he happens upon a bag lady, played by Debbie Harry of Blondie, in an alley that begs him for a kiss.  He’s reluctant but obliges briefly and she instantly turns into a princess.  He then walks around the corner and finds a suitcase full of money, buys a car in cash off of a man on the street and is on his way.

Downtown 81 seemed to appeal to a very specific audience of art enthusiasts and those interested in New York’s music and culture scene of that era.  It was interesting to see but I wouldn’t rush to watch it again.

I closed out my Summer Music Film Festival 2013 experience with a late-night Monday screening of Wild Style, widely regarded as the first hip hop film to be produced.  The film features the legendary New York graffiti artist Lee Quinones.  He plays Zoro, the city’s hottest and most elusive graffiti artist. The story explores the tension between Zoro’s passion for his art and his personal life, particularly his strained relationship with girlfriend and fellow artist Rose.  Wild Style is widely considered as a classic piece of hip-hop history in that it showcases unique subway graffiti, breaking, freestyle MCing and rare footage of one of the godfathers of hip-hop, Grandmaster Flash.

Similar to Downtown 81, Wild Style is quite rough around the edges in terms of acting and pacing of dialogue but it’s a true snapshot and time capsule of an era that birthed what is now one of the most powerful movements on the planet.  As a hip hop fan, I was excited to finally see this as it holds great prominence in the history of the culture, but I don’t know that it has much reach beyond the niche demographic.

The Summer Music Film Festival is something I will always look forward to each year at the Music Box.  A special thanks to the Silverman Group and the staff of the Music Box and the festival for a wonderful 2013 edition!