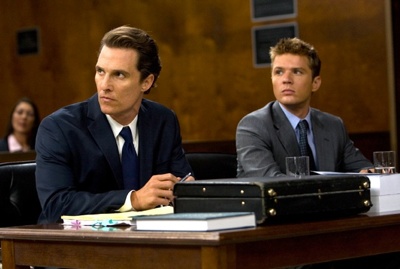 Mick Haller (Matthew McConaughey, left) and Louis Roulet (Ryan Phillippe, right) in THE LINCOLN LAWYER. Photo credit: Saeed Adyani
Backstage Film Reviews- Radio Broadcasts Just the Facts! Mystery, Dramatic Thriller − Lionsgate Studios. The film is written by John Romano based on the best-selling novel by Michael Connelly. Directed by Brad Furman. RT:119 mins. Mickey Haller (Matthew McConaughey) stars as an LA criminal defense attorney whose office is in the back of his Lincoln sedan. Hence the name “The Lincoln Lawyer”! Haller has spent most of his career defending common, everyday criminals, until he lands the case of a lifetime. Louis Roulet (Ryan Phillippe), a Beverly Hills playboy accused of attempted murder, becomes Haller’s meal ticket. But not for long, as the open and shut case quickly changes into a deadly game of survival for Haller. He discovers that the case is similar to one he defended in the past that sent his client to jail for a grisly murder. Supporting cast: Margaret McPherson (Marisa Tomei), Haller’s ex-wife. Frank Levin (William H. Macy), Haller’s street-wise private detective. Ted Minton (Josh Lucas), the prosecutor in Roulet’s case. Jesus Menendez (Michael Peña), a former client of Haller’s who’s in jail for a crime he didn’t commit. Mary Windsor (Frances Fisher), Louis Roulet’s mother. Earl (Laurence Mason), driver of Haller’s Lincoln sedan. Big Screen or DVD Viewing? Entertaining, holds your attention, a great performance by McConaughey. Very refreshing as his past rom/com, leading-man roles have been just so-so. He was tremendous in the film, “A Time to Kill”, (1996) in which he first appears onscreen as a lawyer from John Grisham’s adapted book. Nice to see him back in this type of role. Much of the beginning is shot with a very shaky hand-held camera, which tends to make me dizzy. Thankfully, the technique was short lived. You’ll view Haller being driven around LA by his driver while funky music is played in the background. Haller occasionally pulls over and chats with the local members of the Hell’s Angels Motorcycle gang, which he defends. Old fashion courtroom drama scenes with spot-on pacing. Notable Script Lines: “Let’s role.” “Whose side are you on anyway?” The Bottom-Line: Unconventional character who decides to make the right decision, even if it means compromising his own safety. Fast-paced, twists and turns, should hold your attention. Sarah Adamson © March 19, 2011