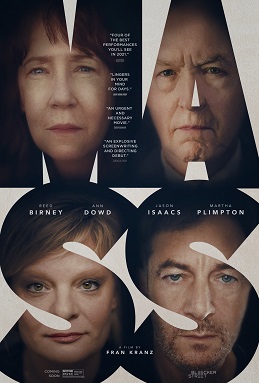 “Mass” is playing in theaters now; it’s the story of two couples who meet face to face to discuss their sons. One of the couples has a son who died due to a mass shooting, and the other couple is the shooter’s parents, who also died. This is a compelling drama by filmmaker Fran Kranz, bringing four grieving parents together creates empathy for all. Ann Dowd gives a riveting performance as the mother whose son committed the horrific crime.

The film’s tone is similar to a stage play, watching four ultra-nervous people sitting at the same table—at times, the discussion becomes unbearable and different parents rise and move backward in hopes of shielding themselves from the pain. From the beginning frame, we are drawn in and are intrigued by this emotional gathering of people whose lives are forever connected.