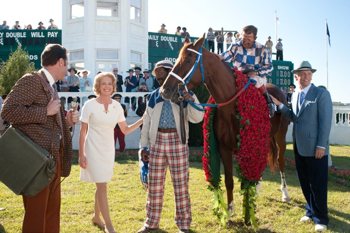 (L-R) Diane Lane, Nelsan Ellis, Otto Thorwarth and John Malkovich in “Secretariat”.
The Perfect Family Film − Crossing All Generations Disney’s “Secretariat” is a heartwarming story about an amazing race horse and its owner, Penny Chenery (Diane Lane), who believed in the horse’s uncanny athletic abilities to not only compete, but to win. Many of us are familiar with the race horse, Secretariat, who in 1973 won the Triple Crown in horse racing, by winning all three races; The Kentucky Derby, The Preakness and The Belmont Stakes. This is an unusual occurrence for any horse, as the odds are highly stacked. I remember watching the famous horse race on TV with my mother, who thankfully was always ‘in the know.’ This was especially true if a historical event was involved; she made sure we were tuned in. Upon viewing the race again on the big screen, I had chills as memories of that day returned. When watching that race in 1973 you knew something phenomenal had just happened and the same is true of the film. It’s hard not to get caught up in the drama and emotion. By the time the race occurs, the incredible back-story has unfolded and you may just have to contain yourself from wanting to stand up and begin cheering. Several audience members during the screening did applaud rather exuberantly. Diane Lane carries the film just fine and is paired with John Malkovich as he portrays Lucien Laurin, the flamboyant French Canadian trainer.
Surprisingly, the film’s historical timeline starts before Secretariat is born. We are given a firsthand look at the beginnings of the champion and the determined owner. Penny Chenery actually lost a traditional coin-toss that would determine who’d get first pick of two fouls produced by Ogden Phillips’ stallion Bold Ruler and Chenery’s mares. She had her eye on the foal (later known as Big Red), who she knew Phillips would not choose. Chenery entered the match with confidence, as she’d be victorious regardless of the outcome. Phillips had more money and advisers than Chenery and was sure of his choice. To his astonishment, he was outsmarted by a homemaker who had a better understanding of bloodlines. An amazing and heartwarming scene occurrs one evening when the chestnut-colored horse is born who becomes known as Big Red to friends and family but Secretariat to the world. The majestic rolling hills of the Virginia landscape and Meadow Farm Stables are photographed beautifully and this is surely one of the many reasons you’ll enjoy this film.
Penny Chenery was living her life in Denver, Colorado raising four children in a typical 70s stay at home marriage. After her mother suddenly passes away, she rushes to Virginia to comfort her ailing dad and make tough decisions regarding the stables. Her instincts were to stay and keep the horse farm going. Many flights back and forth from home to Virginia were necessary. After Secretariat was born, something changed as the horse began to consume Penny’s thoughts. They had an uncanny relationship as they shared a special bond. She sought the best trainer, Lucien Laurin who was hungry for a winner, (he carried all the old clippings in his pockets of the horses he’d trained who had lost). The film features the reason behind Big Red’s name, the training routine, the road to the Triple Crown, and how Penny’s determination caused her own daughter to value the notion to follow your heart and instincts in order to realize your dreams. Director, Randall Wallace, who penned the screenplay, “Braveheart” obviously had to choose which facts to highlight surrounding this amazing historical event. I’m pleased with the choices, as the heart of the story is Penny, her big, beautiful horse, and their combined determination. Sarah Adamson © October 11, 2010