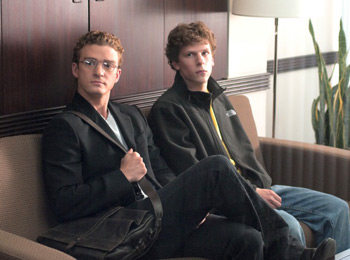 Justin Timberlake as Sean Parker and Jesse Eisenberg as Mark Zuckerberg in The Social Network.
Friend Me, Tag Me in a Photo, Post on My Wall − Facebook Fans Rejoice as this Critic Clicks: LIKE Facebook, the social network that boasts 500 million users, now has a Hollywood film devoted to those Harvard dorm room beginnings of the site − and I’m pleased to report, it’s remarkably brilliant. The film centers on Mark Zuckerberg, a Harvard sophomore, whose relentless fascination for computer hacking and programing created the world’s largest social network. The talented Jesse Eisenberg (Adventureland, 2009 and Zombieland, 2009) stars as Zuckerberg. Screenwriter, Aaron Sorkin (The West Wing, Charlie Wilson’s War), penned the screenplay based on Ben Mezrich’s book, “The Accidental Billionaire.” Academy Award nominee, director David Fincher (The Curious Case of Benjamin Button, 2009; Zodiac, 2007) presents us with a story that would typically not be an easy one to tell. For instance − how do you chronicle the daily computer activities of an individual without boring everyone to tears? Fincher, paired with Sorkin and an excellent cast present a dramatic and realistic snapshot of what they presumed to have happened on that Harvard campus not so long ago. Zuckerberg was not consulted during production and has not commented too much, other than stating that his life really can’t be that dramatic. After viewing the film, I beg to differ. Although, please be warned that this is a Hollywood version and with that does come drama, we really don’t know how much is true.
The film starts with a very dramatic break-up scene in which Mark and his girlfriend have come to the conclusion that their relationship is over. Well, let’s just say the girlfriend is through. Mark’s hurt and lashes back by getting drunk and blogging bad things about her while back in his dorm room. He also decides to hack into the Harvard Sorority photos and create a game of ‘who’s hotter?’ He pairs two photos side by side and you get to choose. He continues his hacking all evening and eventually shuts down the Harvard internet system around 4 am. And − this is only the beginning! Later on in the film Mark is approached by tall, athletic twins from the Harvard crew team asking if he’ll help them write the code for a new website idea they have; The Harvard Connection. The idea is that you have to have a Harvard email address to access the site, thus making it exclusive. You’ll be able to connect with friends that are from Harvard only as others look on in envy. The twins pitch the deal to Mark to help him regain his social status on campus. Mark doesn’t hesitate, he’s in. As Mark breaks off communication other than emails filled with excuses as to why he can’t work on the site, in a short amount of time he launches his own Harvard website called The Facebook. Mark’s roommate, Eduardo Saverin (Andrew Garfield), helps with the finances, offering seed money and moral support. It also appears that he’s Mark’s only friend on campus. As the site starts to grow beyond Harvard, the Winklevoss twins portrayed by Armie Hammer and Josh Pence, decide to sue for ownership of the idea. As the site grows so does Mark’s notoriety and he’s soon dining with the flamboyant Napster founder, Sean Parker (Justin Timberlake). Parker sees a winner in the site and gives Mark a word of advice, “Change the name to simply, Facebook.” Mark appears memorized by Parker’s Napster stories and moves further away from his roommate. Eventually, Mark moves to Silicon Valley to meet with Parker’s venture capitalists, who will catapult him into the next level. The tale is a dramatic one. Mark Zuckerberg is portrayed as a brilliant, but socially awkward guy. He’s rather sad, and doesn’t smile much through the film. Although, he doesn’t have much to smile about, especially during the round table, pre-trial scenes in which 3 of his classmates are suing him. The film flips back and forth weaving the story through flashbacks as Mark is being questioned by attorneys. The Social Network, is a very smart film about very smart people, and more importantly, the relationships of those people. The combination worked and as a daily Facebook user myself, I’m pleased that the film is so good and that I now know Hollywood’s version behind the phenomenon. I’d love to hear what the actual story might be! Sarah Adamson ©September 30, 2010