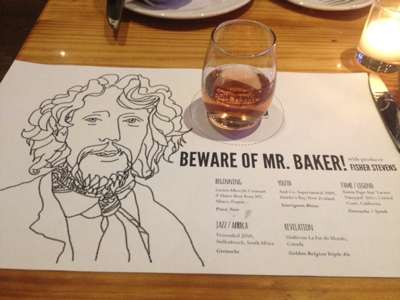 This unique venue offers live music, film previews, brunch, dinner, wine/dinner events, comedy events and more. There’s valet parking but we found plenty on the street. I’ll be back due to the astonishing spaciousness, the classy ambiance, excellent service, the entertainment factor and of course, the exceptional wine choices.

In compliance of full disclosure, I can certifiably say that I am a ‘wine snob.’ It’s actually one of the few labels I don’t mind when referring to myself, as I truly live by the adage, ‘Life is too short to drink cheap wine.’ With that being said, the wine was not over-the-top expensive either; it’s priced somewhere in the middle, but remember you’re also paying for the upscale ambience. Having frequented many small, dimly lit ‘wine bars’ over the years, City Winery bears resemblance to none of those. It’s a beautifully well-planned space with two mega areas, one with a second story level, and a grand entrance. There’s also a humongous outdoor courtyard, adjacent to the restaurant that’s calling my name come spring! City Winery Chicago opened in August of 2012, and is the expansion of City Winery New York, with Chicagoans as the lucky benefactors.

We attended ‘A Film Preview/Wine Pairing Event,’ hosted by filmmaker and producer Fisher Stevens, who was promoting the film, “Beware of Mr. Baker.” It’s a documentary of the legendary drummer Ginger Baker of the band, Cream. Perfect for me, as I’ve been a member of the Chicago Film Critics Association for the past five years and I was lucky enough to see Ginger Baker live in Madison Square Gardens (2005) for his last performance with Cream.

The event started at 8pm and when the doors opened at 6pm you are notified that seating is first come first serve. Samantha, our waitress, was pleasant and helpful. The menu is mainly small plates, but they do offer large portion dinners.

Yum/Taste Factor − Details of the beverages and food we tried.

Wine Flight plus 1 Beer-You received a very clever placemat with a drawing of Ginger Baker and the names of the wines. We were told that the pairings were matched to the tone of the movie clips and the time frame in Baker’s life. $15 for 5

Wow – what a cool concept! The pairings of the wines to the film clips were highly creative and simply lots of fun. The reasoning behind the pairings were totally random and ultimately connected, (similar to the 6 Degrees of Kevin Bacon game). Here are two examples, “We thought this wine would be great because it’s a combination of 2 grapes and we are going to show you 2 film clips.” “We chose this wine because it’s accessible like the director of the film.”

Seasonal Mushroom Flatbread-Shiitake mushrooms, sage, goat cheese, béchamel cheese. The crust was soft, light and dripping with flavorful olive oil. Mushrooms were delicious with generous helpings of goat cheese. Simple and pleasant, it was great with the wine and the beer. $13

Braised Duck Tacos-Served in mini corn tortillas, with cabbage mix and guacatillo salsa. The duck was warm, finely shredded and was paired perfectly with the guacatillo salsa that screamed cilantro. A tomatillo is used for the salsa, which was new to my taste buds. It’s green and about the size of a large cherry tomato; although the inside is white and meatier than a tomato. This creamy light salsa tastes like an exact mix between guacamole and green salsa. $11

Brussels Sprouts-Caramelized, served with mild whole-grain mustard sauce. These can be tricky to prepare and these were cooked perfectly. Not too mushy and not too firm. The mustard complemented the sprouts rather than over powering them. $5

City Winery Sliders-Three mini all beef burgers-100% free range, grass fed, served with lettuce and tomato on pretzel rolls. The roll was toasted but slightly burnt around the edges. The beef was overcooked to my liking. $12

Dark Chocolate Torte-Chocolate, raspberry coulis, chocolate ganache, candied raspberries. Perfect for chocolate lovers, the chocolate was ‘melt in your mouth’ delicious, the raspberries were sugary and added a crunchy sweetness to the flavors. $9