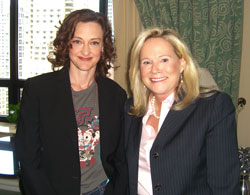 Joan was on a press junket for the movie Kit Kittredge: An American Girl movie. Joan portrays Miss Bond a nutty mobile librarian and a Kittredge villain boarder in the film. Joan discusses her role, her own parenting balancing act, her brother John Cusack, her father’s illness and thoughts on acting in general.

Joan Cusack is slim and beautiful. She wore a really cool vintage style T-shirt with skinny jeans and slipped into her tailored navy blazer for photos. She’s both serious and comical, a hockey mom, articulate, candid about the movie business, grounded, personable, reflective, great sister to her brother, family comes first and she loves Chicago. She was very easy to interview and elaborated upon the questions. She’s the kind of person you’d like to go to coffee with and discuss your own life.

Sarah Adamson Question: Your portrayal as Miss Bond was wonderfully entertaining and provided a comedy element to a serious storyline. How did Miss Bond develop as a character and is she based on any other characters you may have played in the past?

Joan C.: It was supposed to be comedic relief in the movie. That’s why they made that character because of the serious topic. Having fun with the character and the director’s vision about what they wanted it to be like is what I was trying to do.

I did drive and crash the book mobile myself. It was an old vintage truck with a button on the floor that you press.

Question: Did you enjoy playing the “Villain with the Heart?”

Joan C.: Yeah, it was fun. I really didn’t know about the American Girl books as I have 2 boys. The Madison, Wisconsin connection was interesting as I went to school in Madison and the fact that the books are such empowering stories for girls and for now even the Depression era piece.

The one part in the book that I think is amazing is when they are talking about the Robin Hood idea and how that really wouldn’t work “Stealing from the rich and giving to the poor. As it doesn’t really solve anything, mostly you just have to work hard with what you have and not be afraid of challenges and stay hopeful. I thought it was just incredible that this in a little girls book and also for our time as it has such meaning.

Sarah Adamson Question: Can you tell us a little about the filming of the levitation scene with Stanley Tucci without giving away too much?

Joan C.: Yeah it was really fun. “My kids were like, how did you do that?” And I’m like I’m not telling! (Joan was giggling) It was kept a secret to the entire cast.

Question: How have you been able to work on this film and be a Mom?

Joan C.: This one was easy because it was filmed in Toronto last summer which is a 56 minute flight. I would go for a couple of days and then come home. My boys were also able to come up and be on the set because of all the kid scenes. Most of the time I work as a Mom It’s hard but nice to go and work and be around actors, they are just such entertaining people Stanley Tucci and Jane Krakowski are comedic performers and are hilarious ,they’re just so much fun to be around. The set was really fun!

Question: Did you take this role based on any one decision?

Joan C.: I think that you may agree that this business is a difficult business. It’s hard on your soul, the whole Hollywood world values and distractions, the craziness, the highs and the lows. For me it’s about what works for my life and my family. This movie was about something meaningful shot in Toronto. That’s why I chose to be a part of it.

Sarah Adamson Question: Do you and your brother (John Cusack) ever help each other in developing a character for a role? My brother is a writer and he has helped me tremendously.

Joan C.: Yes, I guess we do to a certain extent. I think it’s nice to have someone else who understands what you’re doing. Someone you can talk to about certain things that others wouldn’t maybe understand.

Question: Are your boys coming to the premiere tonight?

Joan C.: Yes, they are. You know, I did another movie with Abigail and they are about the same age. “My Sister’s Keeper” with Abigail shooting in LA and they came out for a weekend to met her again. They are about the same age. Tonight is a benefit for the Pancreatic Michael Rolfe Cancer Foundation of which my Dad died of (2003) so it was really nice that American Girl and the movie to do this because they just pool all of their money for an early detection test. It’s a great foundation. (Joan is a member of the Foundation Board.) It’s such a daughter/father story and a sweet connection.

Question: Being in such an acting family, are your kids interested in the field?

Joan C.: My theory is that everyone acts all the time. Kids are constant performers. We have a public self and it’s all about performing and how do you get what you what and what you need. I loved growing up and learning about acting and the Priven Theater Workshop does really well in the art of being creative and developing your inner voice.