Karen was in Woodridge, Illinois with other cast members of the movie “Animal House” for a reunion and a special screening of the movie at the acclaimed Hollywood Theater. Owner Ted Bulthaup granted me an exclusive interview with Karen.

Karen was dressed in a gray sweater with one of her beautiful multicolored scarves wrapped around her neck. (Karen has founded an incredible knit wear company called Karen’s Fiber Art. She designs clothing and accessories. She’s beautiful, slim, intelligent, articulate, funny and a true Hollywood star. Ageing gracefully as nature has intended, she looks amazing. I was thrilled to be interviewing her one on one, Karen’s role as Marion in the 1st Indiana Jones movie has always been one of my favorites.

I began by asking Karen about her Midwest roots and how she got into acting. I think you’ll be surprised by her background so sit back and grab a cup of coffee because Karen tells an interesting and engaging story.

Sarah A.- I read that you were born in Carrolton, Illinois. How long were you there?

Karen A.-Yes, that’s true but I wasn’t there long. My dad joined the FBI when I was born as he had gone to school at Washington University in St. Louis and wanted to be near that city. Next we moved to Chattanooga, Tenn. My grandparents lived in Carrolton, Illinois so I remember many summers visiting them.

Sarah A.-What attracted you to acting?

Karen A.-What attracted me to acting didn’t happen until I was 21. I’d gone to design school in New York City, FIT (Fashion Institute of Technology) then worked for about a year, saved some money and decided to travel the world. I traveled to the Caribbean and both Central and South America. When I came back I lived in Washington DC because my parents lived out in the suburbs.

Staff member at Hollywood Theater, “We have an important question, what would you like from Starbucks?” (We both laughed as this was an important interruption and Karen ordered a tall decaf latte.)

Karen A.- Yes, at 21 I had just gotten back from traveling the world and imagined myself to be a writer. So I started writing a lot of prose, poetry and short stories. I started working with a writers group and by pure coincidence there was a person who lived across from me in my apartment and when I was writing on my typewriter

I was looking out of my window and saw a pair of hands typing directly across from me. I kept thinking, ‘who is that person?’ I always tried to imagine the person connected to the hands. Spring came and finally our windows were both opened and I saw this person across from me with long red hair.

He was the director of a theater company. And, I knew nothing about the theater… I had gone to see maybe one play in my life. My parents took me to a few musicals and I thought they were a bit much. The one play I did see when I was going to college in New York was “Short Eyes” by Pinero, it really did have an impact upon me.

So, the director and I struck up a causal friendship. I didn’t even know what a director did. He invited me to attend a play that his teacher (Jerzy Grotoski) was presenting in Philadelphia. I remember sitting on the floor in a church with about 300 other people. The play was performed with 7 or 8 Polish actors all speaking in Polish. It was Jerzy Grotoski’s theater company which was touring the US from Poland.

The play was about 1 ½ hours long and I was a changed person by the time the play was over. I went in 1 person and came out another. What the actors were doing was so profound, that at the end of it I said, “I don’t know what I just saw but I would like to know more about that.” The kind of acting they were doing just blew my mind! So I ended up auditioning for the Washington Theater Laboratory and began to study acting. A lot of wonderful actors came out of that company of whom I’m still friends with today.

Karen A.-Caroline Aaron, do you know her work? She plays Woody Allen’s sister quite often. She’s done a lot of films that Mike Nichols directs.

Sarah A.- I’d probably recognize her if I saw her.

Sarah A.- It sounds like basically you began an acting career.

Karen A.- Yes, my life was going in another direction. I had just applied to work at my local record store when the call came for me to audition for “Animal House.” I remember flying to LA and being very intimidated. I cried all the way home. I was so young and found out that the competition to work in film was fierce. And… I didn’t think that my audition went very well. I didn’t think I got the part and was ready to close that chapter in my life. Who would have ever thought that I’d be here today still celebrating this film!

Actually when the call came that I got the part I considered not taking it. At the time I had the notion that I would be compromising myself by working in commercial films, as there was an underlying snobbism regarding working in ‘plays’ versus working in ‘films.’ I was for a number of years under the premise that working in films was sorta like “a big sellout”. Based on the training I’d had and the people I was working with. And yet… I was obviously curious enough about films that I actually just jumped in and began working in them.

Sarah A.- I would imagine particularly this film and the silly nature of the subject matter would have one thinking twice. (Karen and I both began laughing)

Karen A.- Oh yes, and my record job came through so I almost didn’t take the part. I also wanted to break into theater in New York and wasn’t having much luck. It’s so difficult. So I had a tough decision to make.

Sarah A.- Oh yes, I know all about that, my sister (Susan Carlin) is an actress in New York. She loves the stage.

Karen A.- I had only worked one day when the call came. (Giggling) And I thought, ok I’ll go try this.

Sarah A.- Well, we are all certainly glad you took the part.

Karen A.- Well thank you, I found out later that I got the part because of my training at the Lee Strasberg Institute. Dee Dee Wehle one of the casting directors at Universal pulled

me aside and told me that she had been routing for me all along. She wanted to cast “Animal House” with well trained actors and not just silly young people. She and John Landis did a great job because the cast was so well trained.

Sarah A.- Wow, that is amazing to me! No wonder it’s such an excellent film, now it all makes sense. It has certainly stood the test of time.

I’d like to ask you a few questions about the new Indian Jones movie. I realize you can’t give away too much of the plot regarding the movie. Could you please tell me where you did the filming for the most recent one?

Karen A.- All of my scenes were filmed in Hawaii.

Sarah A.- I love Hawaii, it’s one of my favorite places in the world.

Karen A.- Yes, I love it too, it was magical this time.

Sarah A.-What’s it like to be directed by Steven Spielberg?

Karen A.-It’s a blast; he’s a very, very fun person. I had a lot of fun with him this time as the first time we were from very different backgrounds based on my training. Also, during this most recent film we were much more relaxed. We are older and don’t have so much to prove. 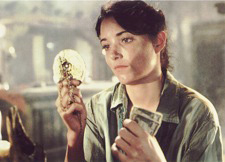 Sarah A.-During the filming of the 1st Indiana Jones movie, were you afraid of the snakes?

Karen A.- I don’t love snakes but I’m not frightened of snakes. I wouldn’t want to be bitten by one and I’ve never owned one as a pet or anything but I’m not adjectively fearful of them. I could deal with being around them because I had to, I don’t know what I would have done if I was genuinely afraid of them.

Sarah A.- I was afraid for you.

Karen A.-I am definitely afraid of spiders and if they had tried to put a tarantula on my neck, shoulder, back or head I might have needed a trained therapist on set to get me through it!

Sarah A.-I always ask this question because I taught children for so many years. I’m always looking for wisdom to guide our youth. What advice do you have for young aspiring actors? (Listen up kids, this is coming from a pro. She’s had an amazing professional career. In addition, she’s worked with the best in the business!)

Karen A.- Do as much work where you are perhaps in the theater and you are really focused on the work and not too much outside of yourself so that you are not worrying about how other people are responding to it. So that means attending classes, studying with good teachers, being in a good program at a good college that has a good acting program. Just having that period of time to just incubate is so important. I think many times that young actors throw themselves into the business too early and they become very discouraged because they discover that it’s not as easy as their imagination may have led them to believe.

If you have a really solid sense of yourself as an actor that’s come out of years of training and perhaps years of working in theater or Off Broadway… just building up that sense of self confidence in yourself will pay off. You’ll need this, because then you’ll be less shaken by the fact that you are going to get a zillion rejections. You are basically just waiting for that one moment that someone will believe in you and your work. 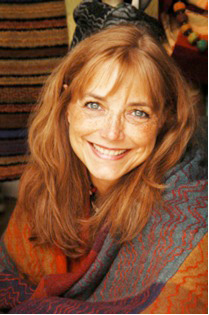